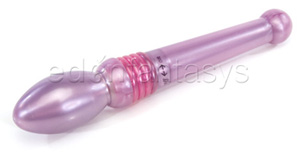 [This has been discontinued. Want an inexpensive but effective plastic vibe? Try the Turbo Glider.]

There is one thing I can thank Sydnee’s Elegant Endeavor for: its slim end, which I was able to slide deeper in my vagina than I ever have before. Unfortunately, this just caused my fingers — which were holding the other, insanely vibrating end — to itch.