Shops that need support most during COVID: brick and mortars such as Early to Bed, She Bop, and Smitten Kitten! More info
Sex Toy ReviewsVibrators
February 26, 2010 33 6 min read 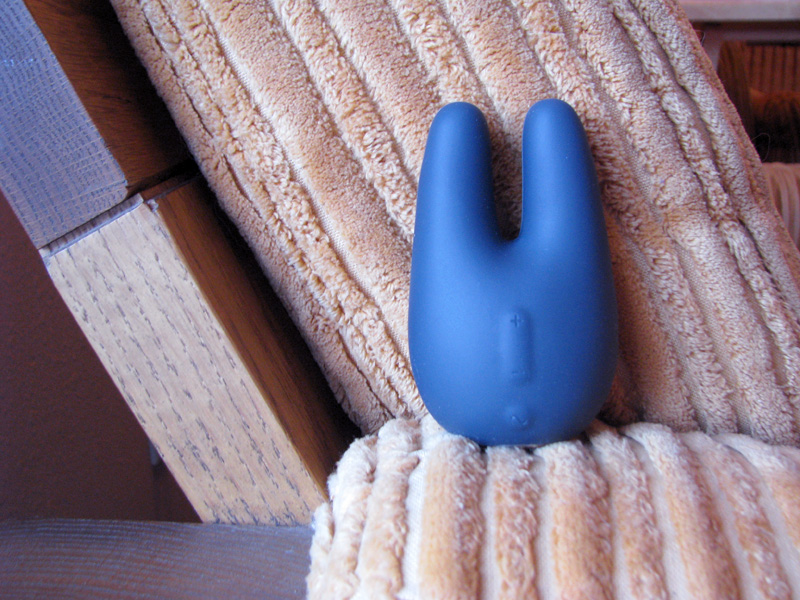 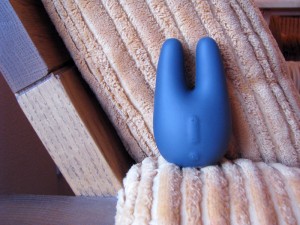 [Note: I no longer recommend the Form 2. Read why here. Additionally, I find it far too buzzy these days, and I much prefer the Rabbit Bullet, Snazzy, or Volta.]

It’s the tweezers! The tooth! The chopsticks! Or… the rabbit ears, if you want to be boring. It’s the Jimmyjane Form 2, a two-pronged pipsqueak that I’ve lusted after for a while now.

Yes, I finally got my grubby hands on it, and I must say — this is definitely a unique toy. So unique, yes, that it may almost be worth its $145 price tag. I’ll give you a hint: dual motors.

Per Jimmyjane’s standard, the Form 2 comes in a classy box, and features the slogan “Sensation in Stereo.” Remember this, students; it will come into play later. The Form 2 doesn’t come with a storage bag, but that’s because its charging dock is badass. You can actually leave the Form 2 sitting on it perpetually, and it will never overcharge.

I know this thanks to Jimmyjane’s brochure-sized manual, which is very comprehensive and even hints at future Form vibrators that will share the same charging station. Bravo on this manual — one of the best I’ve ever read. </nerd> Although, one part did give me pause. While discussing the vibration patterns, it reads: The fifth one is a surprise. It’s up to you to find it.

The color of my Form 2 is “slate” (a very dark navy blue, much darker than the photo), although it also comes in gut-wrenching hot pink. It’s made of matte 100% silicone, with a bullseye of stainless steel on the bottom. There is one motor in each ear, and the entire body of the toy is stiff. The ears are slightly flexible, though.

But that stuff doesn’t matter to me, because the Form 2 is both very strong and very stimulating. And I mean strong! The first two vibration settings are milder, but the last three are intense! On high, the Form 2 is quite a bit stronger than the Bswish Bcurious, and way stronger than the LELO Mia, Lily, and Nea. In terms of non-rechargeables, it’s about as strong as the 2-AA-powered Turbo Glider, and slightly weaker than the Eroscillator. The vibrations are buzzy and concentrated nicely in the ears.

Now, allow me to say something I have never said in my 2+ years of reviewing sex toys:

The thrum pattern is nice, too — it feels like a throbbing sensation. The pulse is faster, more of a standard pulsation mode.

However, getting off with the constant vibration is amazing as well. I hold the Form 2 vertically, surrounding my clit with the ears, which feels really nice. Since the ears are fairly rigid and the vibrations are very strong, there’s no amount of pressure that will force the ears to stop vibrating. It’s basically heaven on earth. I love how tiny and intense this thing is!

The Form 2 may actually be a bit too small, as I have some trouble locating the buttons without holding the toy up to my eyes. I also end up with sticky, lubey fingers afterward.

Oh, and that surprise fifth vibration pattern? I can’t find it for the life of me (nor can my boyfriend — you should’ve seen his puzzled expression as he attempted). I even put out a desperate plea to Jimmyjane, but they replied with “we plan to reveal the path to it shortly.” Seriously? You’re making a vibration pattern into a BIG REVEAL? (I feel like Jimmyjane is the overdressed hipster at the party who insists on being vague in a lame attempt to keep people interested.)

But let’s move on.

The Form 2 is waterproof, and not in a sissy, O-ring way. There is no possible way for water to seep into the toy and damage it. This means: take it to the shower! Take it in a bath! Take it on your trip to the spa! And when you wash it after use, scrub it and allow it to frolic under the tap water to your hearts’ content! (What? You don’t do that?)

The Form 2 can also be locked for travel, which is an awesome feature. You probably won’t want to go around using it in a public bathroom or anything, though, because it isn’t exactly quiet. It’s not loud, and can’t be heard through a closed door, but it’s not quiet.

The manual claims that the Form 2 lasts 7+ hours on one 2-hour charge, but that’s a flat out lie. I did a test with it on high for much of the time, and it lasted an hour and five minutes. I don’t expect a rechargeable to last much longer than that, but the 7 hour claim is just ridiculous.

One really nice feature is that when you remove the Form 2 from the charging station, the toy will blink to tell you how charged it is (high, medium, low, or zero). Finally, someone realized that it benefits us to know when our vibrators are done charging or about to die. Fancy that!

The biggest deterrent will undoubtedly be the Form 2’s retail price of around $145. It’s a pricey little bugger, but most of Jimmyjane’s stuff is. However, the Form 2 comes with a 3-year limited warranty, which might make dropping the $145 a little less painful.

Is it worth $145? Maybe. It comes close. It’s by far the strongest rechargeable clitoral stimulator I’ve found, and it feels amazing in use. The oscillation pattern blows my mind.

If you’re looking for the one clitoral stimulator to rule them all, I still have to point you toward the Eroscillator first. But if you want something small and rechargeable, you won’t find a toy that rivals the Form 2 in terms of sensation and vibration strength. Plus, might I repeat — surround sound for your clit. It’s awesome. The end.

Get the Form 2 at one of my fave shops:
Babeland, GoodVibes, SheVibe, Pleasure Chest, or Lovehoney (international).

Update, 04-08-10: I’m very sorry to say this, but as of this writing, I cannot recommend the Form 2. My unit has an issue that worsened over time: whenever I touch it to my clit, the vibrations move out of the ears and into the base, and the toy gets louder. I’m getting a replacement from Jimmyjane, but this does not ease my mind yet, because I have talked to five people so far who have had the exact same problem with their Form 2. I would like to advise anyone reading this not to buy a Form 2 at this time. I will update if I change my mind and if Jimmyjane fixes this problem.

Update, 04-21-10: My replacement Form 2 arrived. It has the exact same problem, even on its very first use. This problem reduces the vibrations considerably, and therefore makes the toy not at all worth the money. Again, I will update if I change my mind, but Jimmyjane would have to change the actual toy.