Review: Bare With Me game 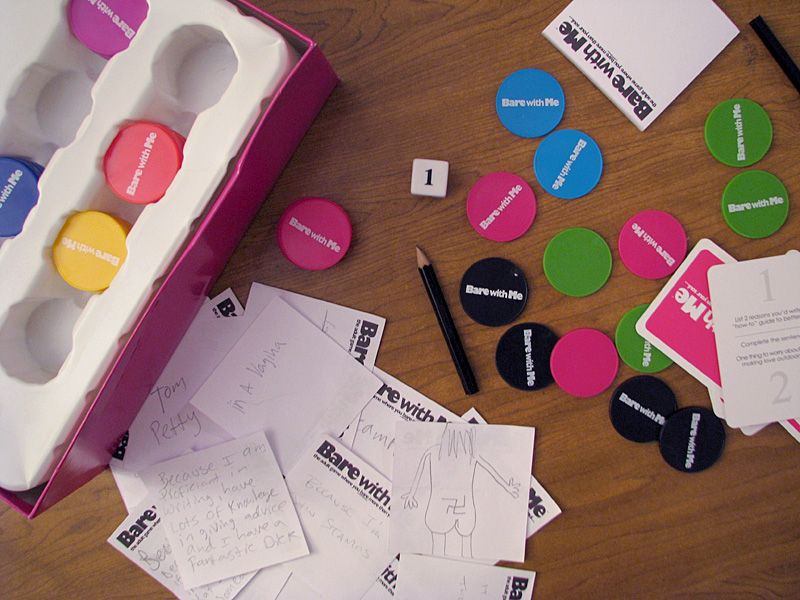 Bare With Me is a sex game, so unsurprisingly, the box is beyond ridiculous; it features a jungle scene with a woman bathing, a creepy-ass park ranger leering, and a bear eating a bra. Subtlety is not California Exotics’s strong suit.

The game goes like this: find 3 to 8 players. Each player gets a stack of colored chips, a pad of paper, and a pencil. The first player rolls the very sophisticated die and draws a Bare With Me card. The die determines which category on the card will be read. The first category is populated by questions such as List 2 costumes you’d like your lover to wear while having sex! You would think that the “2 reasons” thing is particular to this example, but it is not. All of them want two reasons, and all of them end with exclamation points. The second category asks players to complete a sentence, such as Women won’t admit it, but they really do like…

After the person suppresses his/her laughter at the text, he/she reads it to everyone else. The rest of the players write their answers on their pads. I assume they are supposed to be serious and tell the truth. The card reader collects these answers, shuffles them, then reads them to the group. Then, one by one, each player makes a guess about one other player’s answer (for instance, “Bobby-Sue is the one who said ‘lacy panties'”). If they are correct, they earn the other player’s chip.

It is hard for me to convey exactly how messy trying to do this is, but just trust me. You have to go around making guesses, then the verification of correctness or incorrectness of the guess has to wait until everyone else has guessed. Basically, everyone has to keep a poker face this entire time so as to avoid tainting players’ guesses. Uh, what a fun game?

Obviously, the game play is flawed. It privileges bigger groups and can get quite confusing (especially with the “List 2…” questions). However, I have more of an issue with the questions on the cards. Some of them are just ridiculous. Some of the questions, if answered truthfully, seem to already have obvious answers, such as List 2 reasons a person watches a porn movie!, Sex toys are great for…, and List 2 reasons male athletes slap each other on the ass during sporting events! Others don’t seem to have actual answers at all (List 2 things that run through your head during an orgasm!). Some are just stupid (List 2 reasons you’d discuss your sex life with friends!, Love is like a balloon because…), and some make annoyingly gendered assumptions (List 2 reasons women say shopping is sometimes better than sex!).

I also had to laugh at questions such as Rough sex is when…, It’s o.k. to laugh during sex as long as…, and I think it would be kinky to…. For obvious reasons.

I guess maybe if you know nothing about your friends or want to find out superficial information about their sex lives, you’d enjoy this game. But all of us found it so bland we changed the rules. We tried to make it as much like Apples to Apples

as possible, and also tried to answer with the most hilarious answers we could conjure. For instance:

Sex is over-rated when…

One sexual word that sounds funny to me is… grandma.

Even with the changes, though, this game wasn’t very fun. My friend put it best when she said, “this is a game for squares.” Oh well; at least my cats are in love with the box.