Eva is meant to provide hands-free clitoral stimulation, but how can it when it won’t stay on my body? 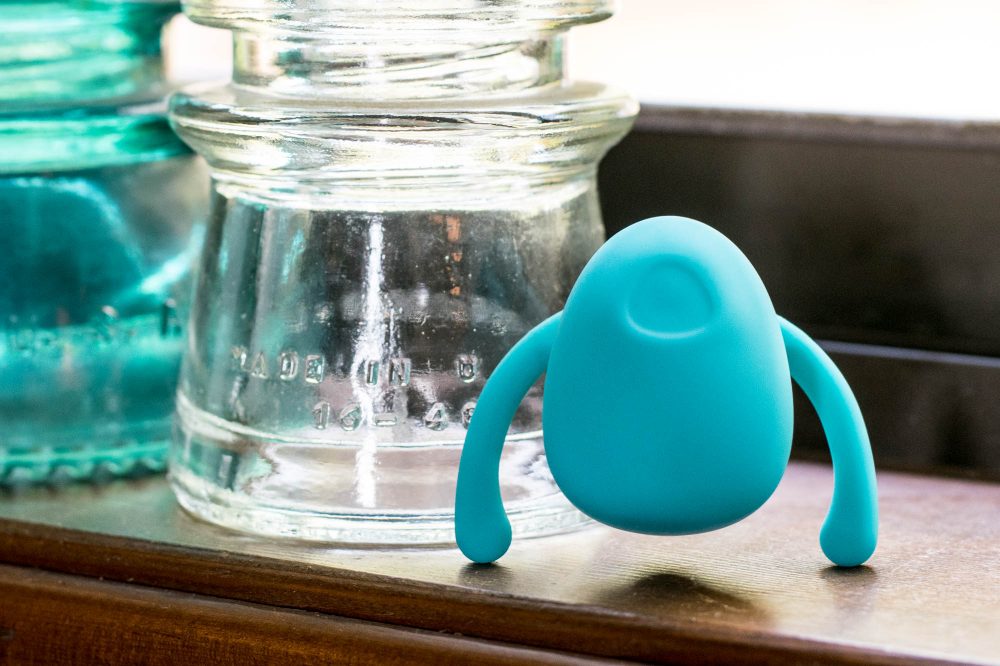 I’ve never told you much about my labia, but I guess now’s as good a time as any. I’d describe my outer labia as puffy, yet unobtrusive. My inner labia? Visible but modest. Usually, my labia don’t cross my mind often… but then the Dame Eva came along, and suddenly I was digging around in there like a raccoon foraging through the garbage.

Eva tries to keep your vagina accessible, open to being penetrated at all times. You know, so objects can slide into it. Or fly into it. Or plop into it. Whatever. I don’t know how you have sex. It does this because, ostensibly, all cis women are straight and all toys they use use during partnered sex must not get in the way of The Penis or The Man Body.1 They must require absolutely no assistance. They must be hands-free. As the thinking goes.

This is a sex toy that desperately needs a disclaimer, because it’s so anatomy-specific it’s nearly impossible to determine whether it will attach correctly to your genitals, and even if it does… you might not want it to.

Eva looks so much like an insect that it has become a common joke. My boyfriend doesn’t know Eva is called Eva; he knows it only as “the bug thing.” I felt less mean when I learned that the creators acknowledge the toy’s resemblance to a beetle, but isn’t it sad when the easiest shorthand descriptor of your product is “the bug thing”? Especially a product that latches onto genitals. The only worse phrase would be “the spider thing,” I think, or “the centipede thing.”

At least Eva’s packaging is on point. No overzealous box or unnecessary materials, just the essentials: USB charging cord, USB-to-wall adapter, black satin storage pouch, manual, and a hilarious sticker that reads “#EVALUTION.” (Okay, sure, make that hashtag happen.) To charge Eva, you pierce the silicone with the charging jack. Because of this, it is not waterproof.

What’s worse than a wasp, though? I’ll tell you: a wasp that hates lube. Eva already wants to fall off my vulva, but adding lube makes that an absolute certainty. Really? I’m offended both intellectually and physically. Lube is essential, number one, and number two, I can’t just confine lube to my vagina. When using a penetrative toy, I specifically require lube on my vulva to reduce friction. That lube is bound to migrate.

There is no way in which lube can peacefully co-exist with Eva. So dry off your vulvas, people. (I suggest a space heater.)

Even during the brief periods when it was attached to my body, it didn’t reach my clit… it just sort of hovered over it, like a flying saucer trying to abduct my genitals.

Wanting to divorce Eva from its hands-free aims, I found that I could tuck my pointer and middle finger under each arm of the bug to press the vibrating part against my clit. But this almost disheartened me more, because it perfectly isolated the thing that makes this toy so awful: the vibrations. The vast majority of my toys have better motors than this, which makes using Eva uniquely upsetting. It’s like being forced to eat broccoli while the smell of bacon wafts through the air.

I thought it would be worse during penetrative sex with my boyfriend, but ironically, that was the only way I didn’t hate it. We had to be in missionary, with his body pressed into mine enough to keep Eva in place against my clit. When I’m in the throes of PIV2 sex and have yet to use a toy of any sort, my standards for vibration are severely lowered. Any vibration is a welcome addition. Therefore, even Eva’s vibrations felt borderline pleasurable. Of course, when I tried to climb on top for cowgirl, I couldn’t get Eva to stay near my vulva to save my life.

I can confirm, as well, that Eva looks pretty stupid on an actual human body. My friend Lorax tried mine while we hung out (as we do) and it looked like a bizarre genital adornment. Also, it kept falling off their vulva mid-sentence. Until they wiped the lube off, that is. “Now that I have no lube and zero arousal level,” they narrated, “it’s making better purchase with my body.”

My partner, Kynan, was able to secure Eva to his vulva better than anyone. We even nudged and flicked the toy to test its stability, because #us, and I was able to finger him without it falling out of place. But Ky knew he wasn’t going to be able to come from the vibrations, and when he turned Eva past its first setting he made a horrible (and appropriate) stank face.

I can’t make sense of the disparity between my experience and his. We both have fairly full outer labia, which should be the most important factor for attachment. But my inner labia are small, while Ky’s have been described as “devastating” in their prominence. Maybe, somehow, this matters?

Labial variety aside, though, I want to reiterate that the vibrations in this toy are a fucking joke. So buzzy, and they’re even more unpleasant with no lube to buffer them. These are the kind of vibrations that lead me to think, maybe an orgasm isn’t worth it. Maybe I’ll just stop. You know it’s bad when abstinence starts to sound appealing.

Innovation is great; making things easier for people is great; women-run companies are great. What’s not great is the prioritizing of a hands-free experience over an actually, um, fulfilling experience, and utilizing buzzwords to seduce people into buying your product. Most people didn’t need a hands-free sex toy until we told them they did, and I’m starting to think we never should’ve told them. Now slapping “couples” or “hands-free” onto your packaging instantly makes cis hetero couples feel like clitoral pleasure is within reach, when — let’s be real — it’s still a struggle for most to achieve satisfactory clitoral stimulation during PIV sex.

I don’t want to downplay the fact that women made this and it’s a unique and valid and ambitious idea. The creators of Eva seem articulate and understanding of the nuances and obstacles involved in their work as designers. I am certain they are the reason this toy is comfortable and not pinchy, teal and not pink,4 why it doesn’t come in a box the size of Mt. Rushmore and isn’t named something like LadyHug. But… and I can’t believe I’m saying this… women aren’t everything. Women have invented some amazing things, but this is not one of them. At least if we’re judging by execution rather than concept.

I am so tired of giving Eva ninth, tenth, eleventh chances. The turning point is not coming, the silver lining is not there. Transcendental pleasure is not possible, and I knew that long ago, but now I believe even mediocre pleasure is not. They wanted me to tuck this toy under my labia, but there’s only one place I plan to tuck it now: deep in some rarely-opened bin in my closet, somewhere I’ll forget.