Useless laser light energy and a manual that dictates my orgasms: the Afterglow is a scam and a waste of money. 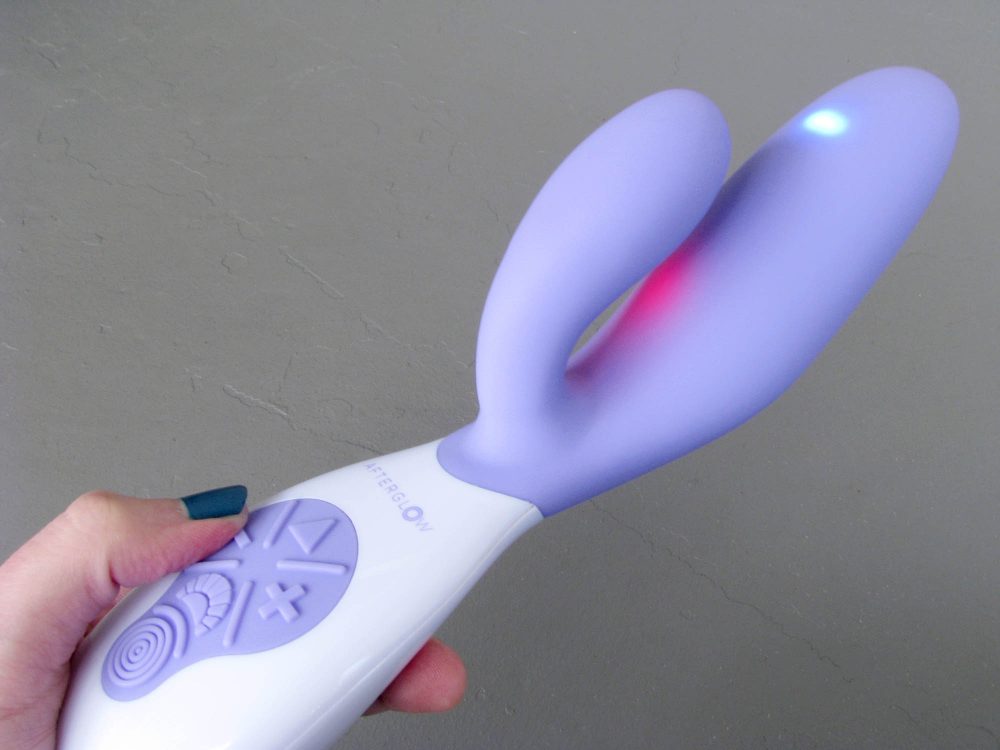 I feel bad for celebrities. You’ll never hear me say that again. But they got the Afterglow in their goodie bags at the Oscars, and this is not what a good sex toy is. Not even close. Not even in the same hemisphere. (Tegan & Sara, if you’re reading this, I will personally buy each of you a Pure Wand to make up for this travesty.)

Out of the box, the toy had a hang tag around it which creepily read “I’m yours.” It came with a suede storage bag and a fancy-as-fuck locking leather box. Whatever money they spent on that storage box could’ve been used to make the toy waterproof, but nope — you’re not even supposed to clean the Afterglow under running water. That alone makes it not worth the price of $199. But don’t worry, there’s a lot more.

The Afterglow is equipped with features that aren’t actually features, such as a “privacy mode” which turns the red and blue lights off (now nobody will know that something is in your vagina!). The controls are oversized, like buttons on a TV remote for old people — this is the “no-look keypad.” After trying some of the nonsensical buttons, I had to consult the manual on how to turn the Afterglow on. That’s when I found out about the “travel lock”: you must press the plus and minus button simultaneously for 3 seconds to turn the toy on. Every time. Totally practical!

The manual is an experience unto itself — full of bombastic claims and patronizing instructions. One section’s header reads “Innovation by Doctors, for Women”;1 there is a long description of each phase of the sexual response cycle and how the Afterglow enhances all of them; I’m promised “what tantric teachings have called Kundalini, an energy allowing a more full body orgasm.”

You might love the Afterglow if you get off on being psychologically dominated by pre-programmed vibrators and instruction manuals. The 4-page long Guru Afterglow Guidance section (pictured) is particularly bossy, instructing in painstaking detail how to properly experience the PulseWave O program, an 8-minute “journey designed to enhance arousal and help you achieve better and more frequent orgasms.”

Time to relax and relish the sensations? THINK AGAIN. If I dare to near orgasm before five minutes have passed, the manual commands me to “decrease pressure. Wait.” Uh — okay. After five minutes, I’m given permission to come: “enjoy. It is time.” But what if I don’t orgasm within the 8-minute program? “Do not fret . . . Your body is primed for a great orgasm.”

This is genius. Put some fancy technology in a shell that has been known to provoke orgasms. When it provokes orgasms, or when it simply gets someone sort of close to orgasm, EUREKA! SUCCESS! BREAKTHROUGH IN MEDICAL SCIENCE! WOMEN HAPPY!

Let me break down this PulseWave O program for you, because it’s not that complicated or exciting.

As a program meant to arouse and bring me close to orgasm, PulseWave O succeeds. The first change in vibration is well-played, and the second change pulls me back from the precipice of orgasm, teasing me until the final change swoops in to finish the job. But it’s that finishing of the job where it fucks everything up.

Every time I have an orgasm at the acceptable point in the program — after 5 minutes — the orgasm is decidedly shit. The oscillating vibration delivers me to the moment of orgasm, but fails to stimulate my clit thoroughly at the peak. It’s so frustrating I tend to make weird exasperated noises.

Ironically, I have better orgasms when I come in the 1-3 minute window — the time-frame the manual expressly forbids me to orgasm during.

But let’s be honest. I don’t want to come during any of the settings. The Afterglow’s vibrations are shitty buzzy surface level crap, and the shape doesn’t fit my anatomy. Like many rabbits, the clitoral arm overshoots my clit, so I have to insert the shaft only halfway to rectify it. This feels weird and stupid. The clitoral arm is fairly flexible, so at least it doesn’t jam into my clit if I thrust. That’s the nicest thing I’m capable of saying about this toy’s shape.

But, devil’s advocate — maybe I just wasn’t following the excruciatingly specific program? So I set out to do exactly what the manual instructed: dim the lights, (sorry, don’t have one), turn off my phone, sip my favorite beverage (as I drank my wine I thought oh god, am I GULPING?), lose any uncomfortable clothing, and get into a relaxing position. I counted my breaths as I watched the clock, because that’s a winning formula for relaxation. Then I suffered through the PulseWave O “experience.”

Innovation is awesome when it’s both discernible and pleasurable, but the Afterglow’s purported technology isn’t even fucking discernible. Very convenient, isn’t it, that the energy this toy supposedly emits is invisible to the naked eye? I know when I’m being duped, and so does my vagina. This is nothing more than magical thinking. I’m not taking some asshole’s word for it.

Yeah. The Afterglow was created by a doctor named Ralph Zipper whose entire medical trajectory can be summed up like this: YOU ARE HAVING WOMAN PROBLEMS WHICH I WILL CREATE NAMES FOR AND THEN CORRECT WITH PROCEDURES I’VE INVENTED. He literally created a disorder, “Dysaethetica Vulva,” to justify labiaplasty. The procedure for which involves lasers being projected through diamonds because chicks love jewels, right!?

Here he is talking about “Vaginal Relaxation Syndrome” and how he can cure it with his Incisionless Vaginal Rejuvenation® procedure.

This man is Very Concerned about all these floppy vulvas that “look at bit like jowels [sic]” and can’t “hold penises” anymore. Which explains why the Afterglow Twitter account once tweeted “having a natural birth beats the shit out of a woman’s vagina” and then, when called out, defended it and left the tweet up for posterity.

I am so over dudes trying to mansplain pleasure to me. To fix things that aren’t broken. To fix things that are THE PRODUCT OF PATRIARCHY. You fucking caused this, douchebag. You. You are the reason. And I’m not letting you rush in and act like the hero. My orgasms didn’t need to be elevated, not that the Afterglow helped with that at all — and my vulva is perfect as is.

So, I didn’t achieve nirvana with the Afterglow. Maybe because I don’t own a “do not disturb” sign. Or because I took 19 breaths in one minute. Perhaps because I didn’t buy their special lube with its “unique ‘light activated’ formula.” More likely, it’s because I am a fully-functioning human being capable of independent thinking.