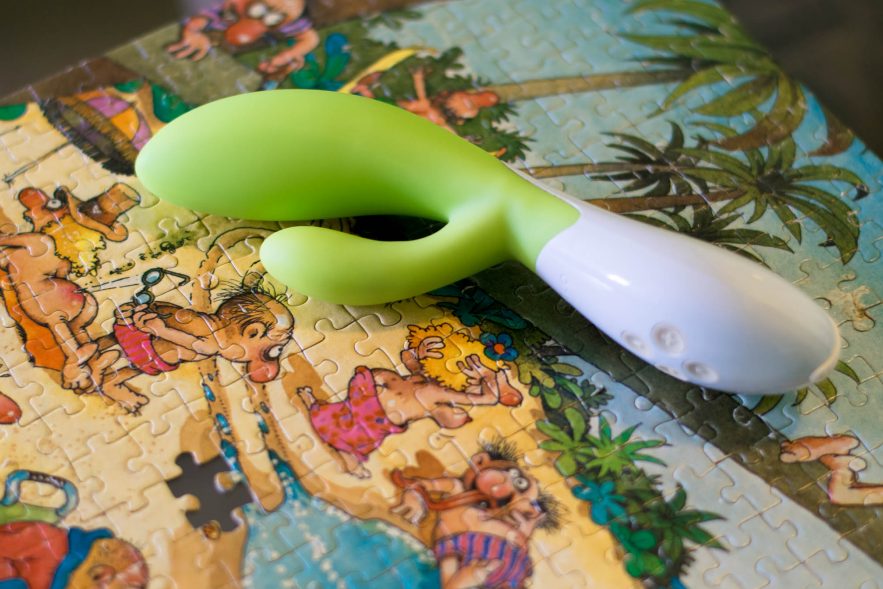 The LELO Ina is a very divisive toy. Those who love it vehemently love it; others vehemently bemoan its incompatibility with their anatomy. And while Ina certainly is anatomy-dependent (as most rabbits are), a more apt description would be “pain tolerance dependent.” Which sounds scary, but it’s true.

I really want to love the Ina because mine is the most glorious, whimsical, succulent shade of lime green EVER, and it also comes in ORANGE (and purple, but who cares). I mean, seriously — LELO fucking rocks for that alone. But I cannot love it — I’m in too much discomfort.

Newer LELO toys have different packaging than the old ones. The large black box that holds the toy is less heavy-duty now, just made of black cardboard. The inside of the box smells rubbery, and the toy itself had a plastic-like smell to its silicone parts when it arrived. There are dividers in the bottom of the box to separate stuff, but they’re completely (and easily) removable. This makes me very happy, as I’ve seen many a sex toy box filled with all kinds of glued-in, permanent gunk that severely limits the box’s future uses. And now you know how neurotic I am.

Ina comes with a manual, a one year warranty, a 10 year “quality guarantee” (if your toy breaks, you can return it within 10 years and receive 50% off your next LELO purchase), and a black satin storage pouch lined with white satin. Ina did not come charged, but it charged in 2 hours. I’ve used it probably five times or so since then, and the charge has not run out.

The most important thing to know about the Ina is this: the clitoral stimulator — perhaps better described as an arm — is rigid, and functions like a clamp on one’s clit. I’m serious when I use the word clamp.  It is very intense, very weird, and… sometimes good? I have never, in my life, felt this much pressure on my clit. I repeat: never.

Update: I’ve tried the Ina 2 now (thank gawd for friends who let you borrow their sex toys!), which is known for having a clitoral arm with a less extreme curve. I was hoping it would be better, but unfortunately, it still clamps quite a bit. The Ina 2 does have more power (it has some serious oomph), and it’s waterproof now. But the thing that most annoyed me before… still annoys me similarly to how I’ve described it in the rest of this review. The clamping is tolerable if I’m in the right mood, but mostly it’s just too much. So, continue on.

There are two ways I use the Ina. Both can get me off because the vibrations are strong. But neither are very comfortable or preferable:

The Easy, Yet Dissatisfying Way: I tilt the toy upward so that the shaft is barely inserted and the clit stimulator touches my clit. This is pleasant for a couple minutes, but then my vagina realizes that there is barely anything inside it and starts to protest. I usually keep this up until I can no longer stand it, at which point I force myself to move on to…

The Hard — Literally — Way: I must pry the clit stimulator upward with my fingers whilst quickly shoving the shaft all the way into my vagina. And so, the clit arm then clamps down on my clit like a motherfucker. It feels like it goes down to the bone. It is, at least at first, incredibly terrifying and not at all pleasurable. Feeling the clit arm disappear between my labia… wondering if I can harm myself with this kind of pressure… not pleasant. 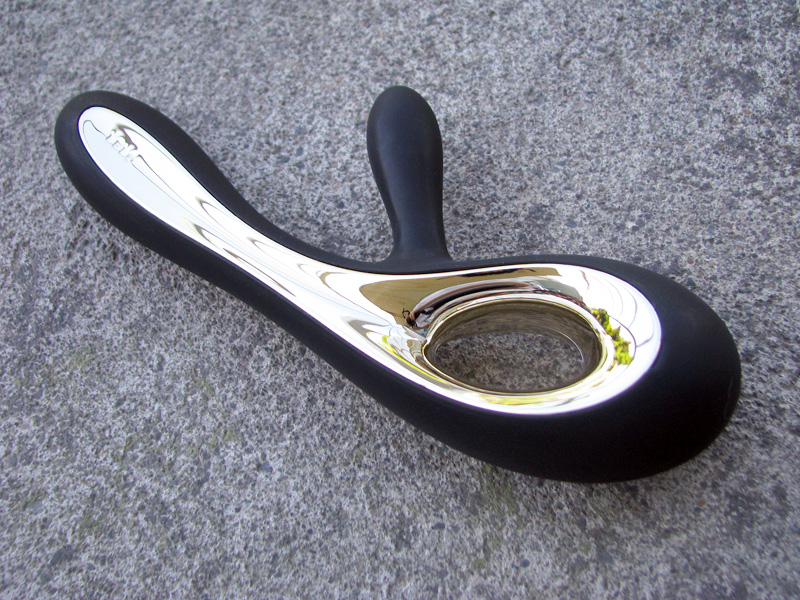 Ina has eight vibration modes, all of which can be made stronger or weaker with the plus and minus buttons. The first setting is my favorite; it’s a throbby, deep vibration with what feels like a very fast pulse in the clit stimulator. The other settings are: buzzy in shaft and very little in clit stimulator, buzzy in clit stimulator and very little in shaft, a pulse that goes between them, a pulse in unison, a rollercoaster, and two weird settings involving pulses that I can’t describe. Some of these are cool — the weird pulsing ones especially — but none of them really beat the first setting.

As much as I enjoy the rumbly first setting, though, I can hardly appreciate it once I insert the shaft. The sensation of the clit arm becomes little more than OH GOD OKAY UM THAT IS A LOT OF PRESSURE. Meanwhile, I guess the shaft is hitting my G-spot? Yeah? The clit stimulator is just so overwhelming that I can’t focus on what’s in my vagina. It’s really sad. Also, the toy can only barely be thrusted, lest the clit arm dislodge itself from my clit and start poking my vulva.

I can’t say I’ve really become used to the sensation of the clit arm, but it is slightly less freaky after the first time. Nonetheless, I don’t feel like the arm has become more loose or anything. It’s still INSANELY INTENSE every time. I’m just more prepared for it now.

I was pretty certain that nobody on earth would want the kind of pressure that Ina’s clit arm exerts. I was going to say “this is more pressure than anyone uses voluntarily.” But then I got to talking to a friend about this toy…

Epiphora: IT IS THE MOST INSANE PRESSURE EVER.
Holly: That just makes me want it.
Epiphora: you want it to go to the bone? cuz that’s what it feels like
Holly: I find myself holding down clitoral stimulators and almost trying to dig them into me to get off.
Epiphora: then you are the prime candidate for ina and i highly recommend it

So I’m torn about the Ina. It’s great because it isn’t shaped like an animal, but the clit stimulator is like a rabid dog on my clit. The shaft is shaped deliciously, but I can’t focus on the sensation of it. The vibrations are strong and deep, but overshadowed by the clamping sensation. It gets me off, but I’d rather just use my Mona 2. With Ina, that clit arm is just too freaking insane.

Get the Ina 2 at SheVibe, LELO, Peepshow Toys, Babeland, Good Vibes, Pleasure Chest, Come As You Are (Canada), or Lovehoney (international).