For all the bravado Revel Body spews forth, the payoff is laughably meager. There’s a reason I’ve taken to calling it the Shit Orb. 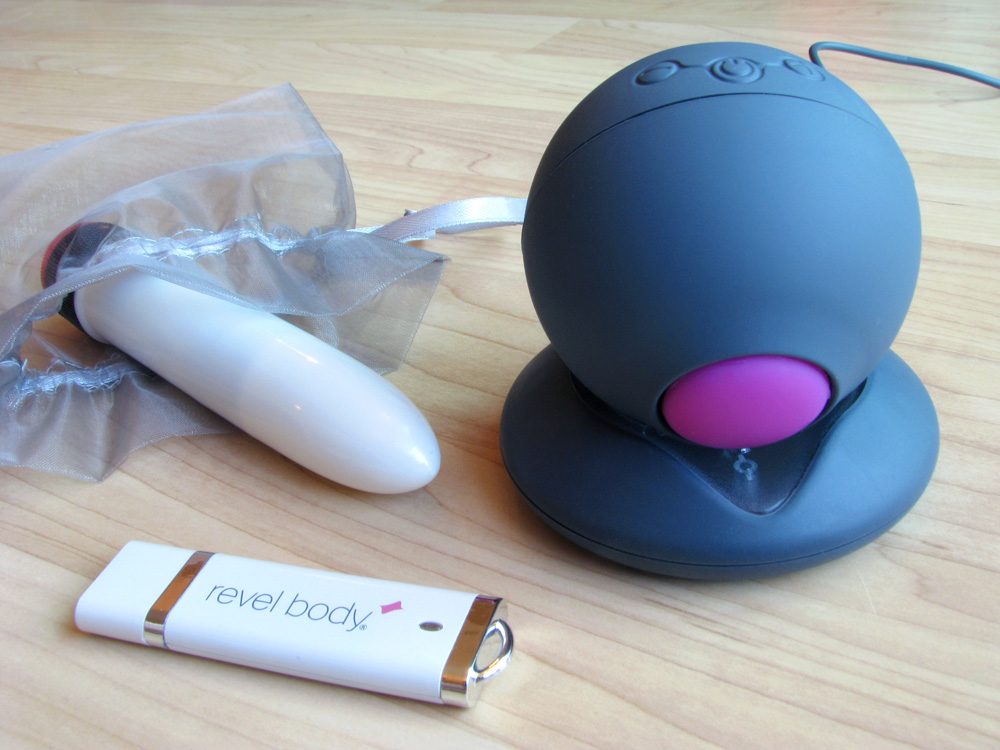 I’ve seen a ton of presumptuous sex toy marketing in my day, but I’d never seen a sex toy that so audaciously attempted to convince me of its superiority — until the Revel Body.

It also came with a branded jump drive. I was hoping it would be like 1998 when I’d get a CD and put it in the computer to find sweet easter eggs. Sadly, it only contained photos, press releases, and a video in which dudes look into microscopes, point at whiteboards, and twiddle dials on important-looking machines.

Most vibrators on the market are battery-powered devices, and virtually all use a rotary motor.

Simple and cheap, these motors operate by spinning the out-of-balance weight at the end of the motor shaft. As the motor spins faster, vibrations of increased frequency are generated . . . Rotary vibration motors generate limited vibration compared to what you can feel. That’s because they have limited power, especially at low speeds, and the range of adjustability is small. Because the weight at the end of the motor is fixed, the only thing users can adjust is the speed of the vibration, not its amplitude or power.

. . . TrueSonic ® motors are based on a linear motor design. Unlike rotary motors, linear motors produce vibration or force along their length and can be used to create high performance vibration. Linear motors operate by delivering magnetic pulses of alternating polarity to a magnetized reciprocating element. Revel Body’s patented TrueSonic technology allows the timing of these pulses to be precisely controlled, allowing the user to determine both the speed and power of the vibrating element over wider ranges than conventional rotary motors.

My clit loves new experiences, so it was armed and ready for some exciting sonic pleasure. But for all the bravado Revel Body spews forth, all 139 dollars consumers must pay for this thing, the payoff is laughably meager. There’s a reason I’ve taken to calling it the Shit Orb.

Of course, if you ask the promotional materials, the Revel Body is better than all these other vibrating mistakes…

Which, oh hell no. Not my beloved Eroscillator. You don’t get to do that. You actually really don’t, because the Eroscillator has its own unique oscillating motor going on — and to pretend otherwise is quite disingenuous. But the folks at Revel Body take the shit-talking even further with a “scientific” graph that shows how the Revel Body’s motor is adjustable in two dimensions (power and speed), while mere mortal vibrators are not…

Color-coded graphs are no match for my clitoris.

The way it works is thus: the orb has a hole in the middle which holds a piston with a flat, pink silicone tip. The power of magnets keeps the piston in place. In use, the piston moves back and forth, to varied success. The sensation ranges from a joyless wriggling (speeds 1-2) to a rapid thumping (3-4) to a useless and barely-perceptible buzz (5-10).

Those higher and higher frequencies may sound like leveling up in a video game, but they feel, clitorally, like the exact opposite. I highly doubt these speeds could get anyone off. Never before have I encountered a toy in which turning it up actually made it less pleasurable, in which accidentally hitting the plus button could halt or ruin the climb toward orgasm. But this is the Shit Orb’s world — we just live in it.

The new version has only 6 settings, but it’s the same story: only two of them are worth my clit’s time. The difference is that the Revel Body SOL jumps from the joyless wriggling (speed 1) straight into THUMPING POUNDING CRAZY MOVEMENT (speeds 2-3). It’s a massive leap, one that eliminates all the settings I liked from the original toy and replaces them with two much more intense ones. Oookay. I wanted more power, but I didn’t want power while sacrificing any sort of meaningful warm-up.

I was also finally able to try some of the other attachments: the three that come with the SOL (Ever, Fawn, and the generic flat one) as well as Niko and Cona. Niko was my favorite as it allowed me to target the side of my clit and therefore felt more intense. My second favorite was Ever, the one that looks like a bullseye. I wasn’t a huge fan of Cona (pictured), which resembles a Dr. Seuss character’s trunk, as it felt too abrasive on most settings. The spiked Fawn felt like being smacked on the clit with a hairbrush.

What of speeds 4-6, you ask? They’re just as useless as the original Revel Body’s 5-10. Absolutely atrocious high-pitched nothingness. Also, two of them are “Om” levels, which supposedly “promote sexual awakening, reduce stress and tension, and renew your mind, body, and spirit.” Right. Wanna back that up with a graph of some kind?]

I will say that despite being the size of a tennis ball (roughly 2.5″ in diameter), the spherical shape ended up feeling more ergonomic than I’d anticipated. But this thing is not cute. It looks like a crusty old webcam staring at you.1 It also rattles pretty loudly on the few settings I like. It’s far from silent — a supposed hallmark of the “TrueSonic” technology.

Look, I don’t doubt that different technology is happening here. I feel the magnetic force field of the toy when I put the piston in. I see the way the piston moves. And yes, I feel it. But the original Revel Body’s piston movement doesn’t translate to pleasure in an impactful way, and the Revel Body SOL lacks any sort of range. $139 should get you surefire orgasms and a variety of pleasurable settings, at the very least.

In a last ditch attempt at finding any redeeming factors, and because ArchVixen enjoyed it in water, I took a break from finishing this review to take the Revel Body in the bath. “You might still hate it, though,” she warned me. Yep! It was about 50% less pleasurable under water, and I couldn’t achieve any suction from the indented side.2

However, I was amused that the toy makes a really cute water fountain:

The Revel Body takes a bath.

Cleaning the Revel Body is a challenge, since the piston has to be shoved out of its socket with significant force, and I am not about to ruin the nails that I spent 27 years learning not to bite. The orb charges on a circular base that plugs in via USB or the wall. And the manual that comes with it… well, that is a treat that I simply have to share with you.

I see ridiculous warnings in sex toy manuals all the time, but the Revel Body’s are outrageous. There are literally 55 of them, including “if device catches fire, do not attempt to extinguish with water” and “if used on hairy parts of the body, small hairs may become trapped between core and device body which could result in hair being epilated.” It warns users not to use the toy on loose skin because “there is a potential for pinching,” nor should people use it near cell phones, computers, and credit cards because “the strong magnets in the device can harm or destroy magnetic media.”

My favorite, though: “DO NOT use on or near children, invalids, disabled persons or animals.”

Good god, I feel like I have a terrorist in my midst. An egomaniacal terrorist who purports to be my friend but gets drunk and makes extremely insensitive jokes about “disabled persons” at parties. A terrorist who is secretly stealing all my money and wiping all the data off my computer. How can my vulva be safe? Oh wait, it’s not — it has loose skin and hairs!

I don’t appreciate a toy that doesn’t want me to get it near things, not even my own body.

One night as I was railing against the Revel Body to a friend, she pointed out that without all the bullshit surrounding this toy — the white slimline “competitor” vibe, the deeply offensive warnings in the manual, the graph, the denigrating of the other toys that I love, the CEO threatening to sue me for talking about his product on Twitter — I would not be nearly as rabid about my feelings. I wouldn’t be calling it the Shit Orb.

She’s right. At its essence, the Revel Body is just a spherical, overpriced attempt at innovation. It doesn’t live up to its own hype, and it doesn’t feel pleasurable on 70% of its settings, but that’s about it. It would’ve been epic if the company’s big huge pretentious shit-talking gamble paid off. But instead, the Revel Body goes into the trash heap of toys which promised technological advances and instead failed clitorises everywhere.

As for me, at least I got a slick jump drive out of the deal. I can totally sell that on eBay for $139, right?

The Revel Body is available at Pleasure Chest and Lovehoney (international).