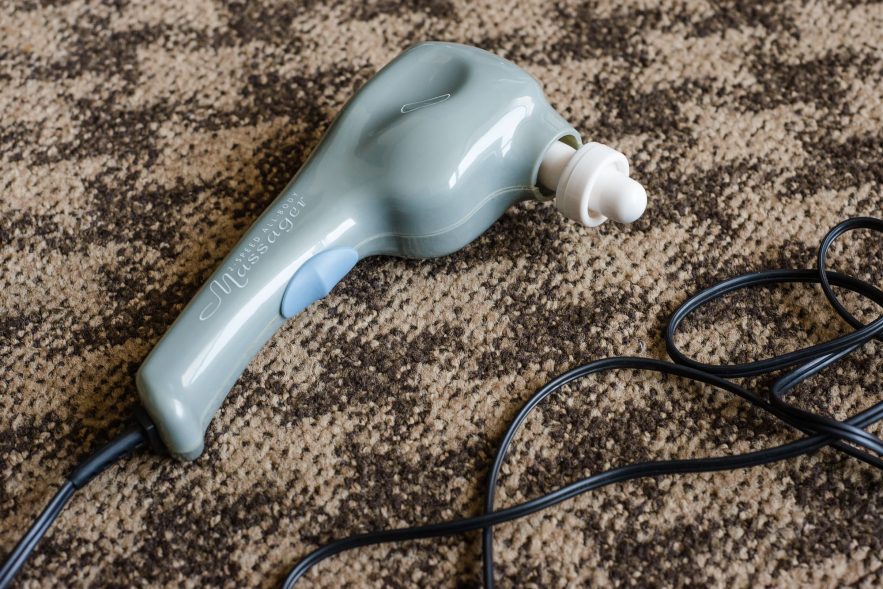 Edit, July 2016: The Wahl has changed since this review, and newer models are significantly less powerful. If you can still find the original, model 4120-1, get it. The shitty one is model 4120-600.

The Wahl is easily lost in the shuffle — usually only mentioned in the same breath as the Hitachi as another once-innocent body massager that has been perverted. But since the Hitachi has been more universally perverted, the Wahl tends to be forgotten. Now that I have tried the Wahl, I feel that this is a grave injustice. And I am here to rectify it.

Previously referred to as the Wahl 7-in-1, the Wahl is an 8-inch long, gun-shaped massager that used to come with seven plastic attachments (now comes with four). Each attachment has a vanilla purpose, and they are named for them: scalp attachment, facial1 attachment, etc. These attachments fit not-so-gracefully around an inner post, usually after some shoving. The Wahl’s cord is a generous 8.5 feet long, with a regular-sized plug, so it doesn’t hog the outlet.

But here’s what’s awesome: EVERYTHING ELSE. Mainly this: the Wahl’s two speeds are incredibly strong and feel completely different from one another — they really feel like two different vibrators. The first setting is more surface-level and buzzy, but very intense, and miraculously not at all numbing. In fact, if I had to choose just one speed to get off with for the rest of my life, it would be very similar to the Wahl’s first setting. I often orgasm with the Wahl before I can make it to the second setting.

The second setting is out of control. It’s deep, with a rumbling, thrumming sensation to it. And when I say that, I mean it. I don’t know if it’s actually moving back and forth, but it feels like something crazy is going on. Like a jackhammer… a really stimulating jackhammer. I have never felt vibrations like this, and I’m kinda in love.

I’m also continually dumbfounded by how quiet the Wahl is. It’s nearly silent on both settings, and sounds much like white noise. With the amount of power this thing puts out, its sound level is miraculous. (Edit, December 2013: I purchased a second Wahl because I kept hearing reports of really really loud Wahls. The second one is just as quiet. Unfortunately it seems like some people get lucky and others do not. See the comments section for suggestions on how to quiet noisy Wahls.)

My favorite attachment is the “spot applicator” — the gumdrop-shaped one. It’s the least obtrusive and easiest to use. Many of the others are simply too big, unless you’re looking for vulva massage. I would warn against ever using the spiky circular attachment on a clit, because it’s impossible to clean, and, you know, spikes. A friend also pointed me toward a nearly-discontinued attachment called the Spot Tip. It’s just a balloon-shaped piece of vinyl, but it’s softer than plastic and easier to clean (it’s louder, though, for some reason).

I don’t know if you can sense my giddiness over the Wahl, but I’m freaking giddy. This is a really awesome toy. The two speeds are strong enough and different enough that they could satisfy anyone; I actually love going back and forth between the two speeds when I use it. And its vibrations are so deep that I squirted using just the Wahl, with no insertable toys at all.

I always wished the Hitachi could focus on just my clit, and the Wahl does just that. The sensation of using the Wahl is quite different — more concentrated and pinpoint — but the intensity is similar. I will be recommending the Wahl to people who claim they can only get off with the Hitachi. And I will prove them wrong.

But what really seals the deal for me is the Wahl’s price: $20. FUCKING $20! That’s cheaper than a lot of bullets that really suck, and significantly less than the Hitachi. Pretty badass, don’t you think?

The Wahl can be found at Amazon.