That pointed shape is totally my thang — but mostly, it’s the type of vibration that hooked me.

THANK THE HEAVENS! There’s a revamped version of this toy, the Touch X, and I’m in love.

Here’s a sentence only a sex toy freak would ever write: I’ve been waiting a long time for a company to make a rechargeable clit toy with a pointy tip. One of my first favorite clit vibes was a bullet with a pointy tip, but I abandoned it long ago in favor of deeper stimulation and rechargeability. I’ve grown accustomed to other shapes, but my clit still loves pinpoint stimulation.

The We-Vibe Touch doesn’t photograph well at all. It looks like a damn potato. It always appears wider, with no emphasis on its tapered tip. I almost overlooked it — especially since the classic We-Vibe is questionable — but I’m really glad I didn’t. The Touch is not perfect, but it is my new favorite rechargeable clit toy.

The Touch comes in a small, squarish box with a proud but not ostentatious image of the toy on the front. Sadly, all this sophistication is obliterated by the white satin storage bag, which feels cheap as fuck. It makes a crinkling sound, as though it’s lined with paper.

This is a pretty small toy: 4″ in length and 1.66″ in width at its fattest. It’s not trying to be the tiniest toy on the market, but it fits in the hand and won’t slither away.  The silicone is a much more appealing silky matte now. You will want to rub it on your face.

At the risk of sounding melodramatic, using the We-Vibe Touch is like coming home. That pointed shape is totally my thang. The scoop on the underside is awesome too, and I imagine people who like pressure on their clits would really love it. Mostly, though, it’s the Touch’s type of vibration that hooked me. These are not faraway vibrations that feel buried in the toy. These are surface level, and they are rumbly and strong.

I approve of this. A lot. And the We-Vibe Tango has the same rumbly goodness, just in a tiny tiny package. Color me surprised, We-Vibe! I did not expect this from you.

One button is all you get for controlling this puppy. The button is easy to press and makes a satisfying clicking sound. But dude, seriously, ONE BUTTON? The Touch has eight settings: four levels of steady vibration followed by four patterns. I tend to forget which level of steady vibration I’m on, then accidentally switch into the first pattern, exclaim, “motherfuck!” and cycle back through everything in distress.

The USB charging system is alright. It can be finicky, like all toys that charge magnetically. The golden charging light is kind of small, and the connection sort of fickle. The silver contacts on the toy are more pronounced now, which helps it connect more easily, but you still don’t want to let cats roam wherever you’re charging this.

My biggest problem with the Touch is its paltry battery life: it only lasts about 70 minutes on a charge. I prefer my Mona’s 2.5 hours, but I’m spoiled. At least the new version of the Touch has a low battery warning — the base will blink like a lighthouse beacon as early as 20 minutes before death. 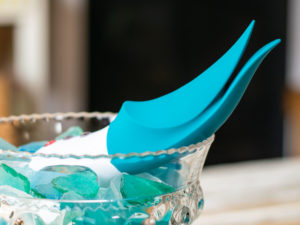 The Touch also can’t be locked for travel, which sucks because this is exactly the kind of toy I would want to take on trips.

Even with its issues, though, the Touch has unseated the LELO Siri as my favorite rechargeable clit toy. Yes, the Siri’s battery life and multiple-button controls are far superior, but the Touch just feels better.

Obviously, if you want vibrations that knock your teeth out, you’ll want to grab the Mystic Wand, Wahl, or Hitachi — but for a small rechargeable vibe, the Touch is more powerful and satisfying than everything else I’ve tried. This includes the MiMi, Form 4, original Siri, Mia, Spring, and your mom.

And hey, the Touch is $100 — not insanely overpriced like some brands.

Now I gotta go mourn the fact that it only comes in icky purple.

Get the Touch at SheVibe, Spectrum Boutique, Early to Bed, Enby, We-Vibe, Smitten Kitten, Good Vibes, Come As You Are (Canada), Lovehoney (international), or Passionfruit (AU/NZ).

Or the Tango can be found at SheVibe, Spectrum Boutique, Early to Bed, Enby, We-Vibe, Smitten Kitten, Good Vibes, Babeland, Come As You Are (Canada), Lovehoney (international), or Passionfruit (AU/NZ).