Sorry, but it kinda bores me to tears. And it’s way overpriced. 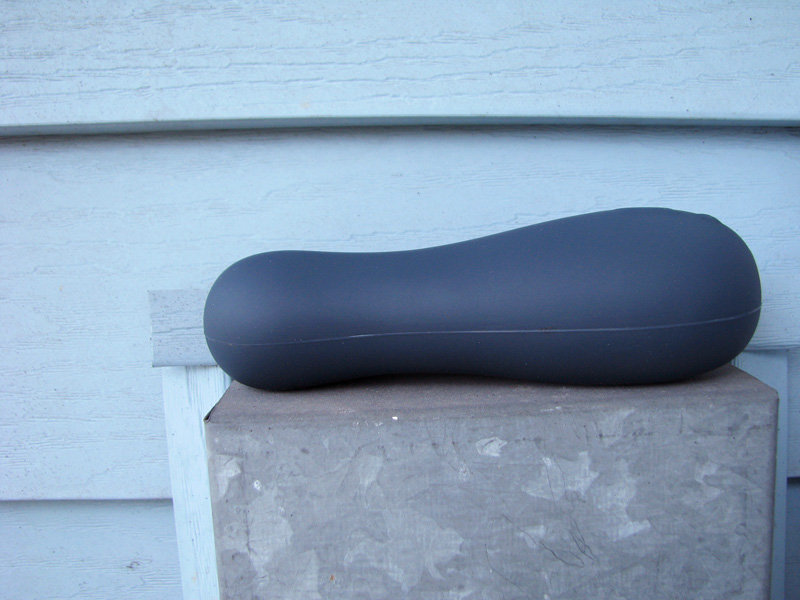 I know what you’re thinking. After such distressing trysts with Jimmyjane’s Form 6, Form 2, and Form 3, why the fuck would I want to try the (inventively-named) Form 4?

I’ll tell you why. Because I was still waiting for Jimmyjane to get something right. And yes, I just used the past tense. The Form 4 is “right.” It has no glitches, no stupid gimmicks, no weird shape. It gets me off without me having to re-position it a thousand times. It’s solid and reliable, and I’ll be keeping it around.

Yet, would I describe the Form 4 as “awesome” or “worth the money”? No. Perhaps I’d feel differently if I liked more broad clitoral stimulation. Or if I really really liked taking my toys in the bath with me. Or if I had an obsession with bowling pins or nesting dolls. But I am none of the above.

Therefore, the Form 4 is just okay. Good, decent, fine. You know what I mean.

But Jimmyjane wants $145 for it. I take issue with this. The Form 4 has a quite prominent seam that runs all the way around the sides of the toy. Jimmyjane is, like, the Gucci of sex toys, yet they cannot master the art of making seamless toys like so many other companies have? Wat? Even if it didn’t have a seam, $145 is still too much money.

I also take issue with the numerous lies Jimmyjane likes to tell about the Form 4:

Why can’t they just say that it’s a “sensually rigid” clitoral toy that can help you stimulate “hard-to-reach pleasure zones” or something? I mean, really. Just tell the truth and make it sound hot. It’s not that hard.

Anyway, the Form 4 is very close in vibration strength to vibrators in its category (such as the Je Joue MiMi and We-Vibe Touch) — however, the Form 4’s vibrations are very buzzy and slightly buried in the toy. They are strong enough to bring me to orgasm, but they are not deep or immensely satisfying. Like I said — good, decent, it works.

But shape does matter. The Form 4’s head is a bit too wide for my personal liking. There are several rechargeable clit toys — the LELO Siri, Je Joue MiMi, and We-Vibe Touch — with shapes that please my clit more. All of those are fully waterproof, two of them are $45-65 cheaper than the Form 4, and none of them HAVE SEAMS.

If the Form 4 was the only contender in the rechargeable clit toy realm, it’d have a better chance. As is, I use it if other stuff isn’t charged and I don’t want to deal with my Eroscillator’s cord, but otherwise, I’m all over my We-Vibe Touch.

Perhaps I’m being too harsh on the Form 41. I mean, it gets me off and I currently use it on a more regular basis than most of my toys. That does count for something. No sarcasm, I promise! It’s just… the Form 4 kinda bores me to tears. I couldn’t even figure out a way to photograph it well.

Sugarcunt: You could take a creative picture where you’re bludgeoning someone with it.
Epiphora: it could bludgeon like… a guinea pig
Sugarcunt: lmfao, so you find a small furry rodent and you position your hand over it like you have a rage.
Sugarcunt: Wear a Nixon mask for anonymity.
Epiphora: that would be putting forth more effort than this toy is worth.

But you know, Jimmyjane is one of the only luxury toy companies that can’t be arsed to include any type of storage with their toys. And they seem to believe their target customer is one who can drop $4,000 on a bouncy sex castle. So… why should I hunt down a Nixon mask for them?