Je Joue’s pebble-shaped vibe is pretty, but its controls are horrific and the vibrations are dubious. 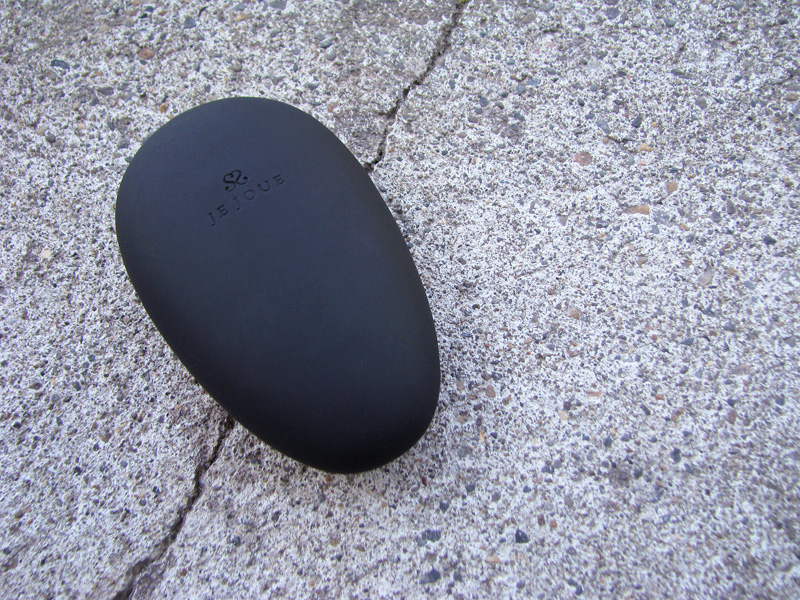 This review is outdated — skip over to my review of the modern-day version, which I adore!

Everyone’s coming out with a cute little rechargeable clitoral stimulator these days. Jimmyjane released the Form 2 and Form 3; LELO invented the Siri and Alia; and now Je Joue has submitted their contribution, the Mimi.

None of these has been the perfect clitoral stimulator; they all have issues ranging from mildly irritating (not waterproof) to problematic (shape is weird) to rage-inducing (has a glitch that turns me into a mass murderer).

Mimi was, at first, on the mildly irritating end of the spectrum. But it slid into rage-inducing when it died on me.

Long story short (I put the whole thing on my Tumblr): my first Mimi freaked the fuck out and died after I took it in the bath for 10-15 minutes. Je Joue was extremely slow with sending me a replacement — then they sent it to another sex blogger instead of me. I don’t know if Je Joue is still mad over what I said about their SaSi or what, but I was not happy with their customer service.

I have tested my replacement Mimi in the bath and in the sink a couple times, and it has not gone berserk. So I’m really hoping my first one was just defective, but I have no way of knowing for sure, as Je Joue never got back to me. The manual does say “DO NOT use your Mimi in water of extreme temperatures (hot or cold),” but the manual also says things like “AVOID MIMI from having contact with the eye or eyelid,” so how am I supposed to know what is real?1

Anyway. Mimi is shaped like an elongated, flat pebble — the perfect shape for skipping rocks, and one of the most aesthetically appealing clit toys I’ve seen. It’s covered in silicone, but completely stiff. One side of the Mimi has the words “Je Joue” imprinted on it, with a small heart that glows red when the toy is on or being charged. Awww.

The two buttons on Mimi, which are situated at the top, are nearly flush with the rest of the toy. They are silver little things that double as the magnetic charging terminals. Sounds brilliant, only THEY ARE FUCKING IMPOSSIBLE TO PUSH. Without fail, I always have to push the plus button more than once to turn the damn toy on, often while steadying the toy with my other hand.

There is no way to lock Mimi for travel. It’s as if Je Joue realized their buttons were bullshit and figured, “if a human can barely turn this toy on, how could a bag of luggage?”

I prefer to be definitive and unwavering in my reviews, but I have my doubts about whether Mimi’s power can be relied upon. See, when I got my first Mimi, I was very impressed with its power. I did some tests and concluded that it was definitely stronger than LELO Siri, and that it fell between levels 2 and 3 on the Mystic Wand, which was pretty damn good.

But now, with my replacement, or perhaps over time with my replacement, it doesn’t pack the same punch. It feels about as strong as the Siri — respectable, acceptable, but not noteworthy. I’m also fairly certain that, over several uses, the Mimi’s vibrations get progressively weaker, as the battery drains. I wish there was a conclusive way to test this stuff.

Still, the Mimi is strong enough to get me off, and its shape is, well, really nice. At first I held it vertically, wedging it between my labia, but I soon started holding it sort-of diagonally against my clit. Vertically, it feels too thin. Diagonally, it is just the right balance of pinpoint and wide.

Mimi is 90 bucks. This is better than, uh, everything, especially Jimmyjane’s toys. I won’t call it affordable, since I know how much ramen one can buy with $90, but it’s a decent deal.

However, I feel weird recommending Mimi, because I simply don’t trust it. The shape is lovely, but the controls are horrific and the vibrations are dubious. I’d rather point you toward the Siri. Siri costs more and isn’t waterproof, but it’s far easier to use and has a track record of, um, not inexplicably freaking out on people. That’s sort-of important, I’d say.

Get the Je Joue Mimi at SheVibe, Peepshow Toys, Enby, or Pleasure Chest.