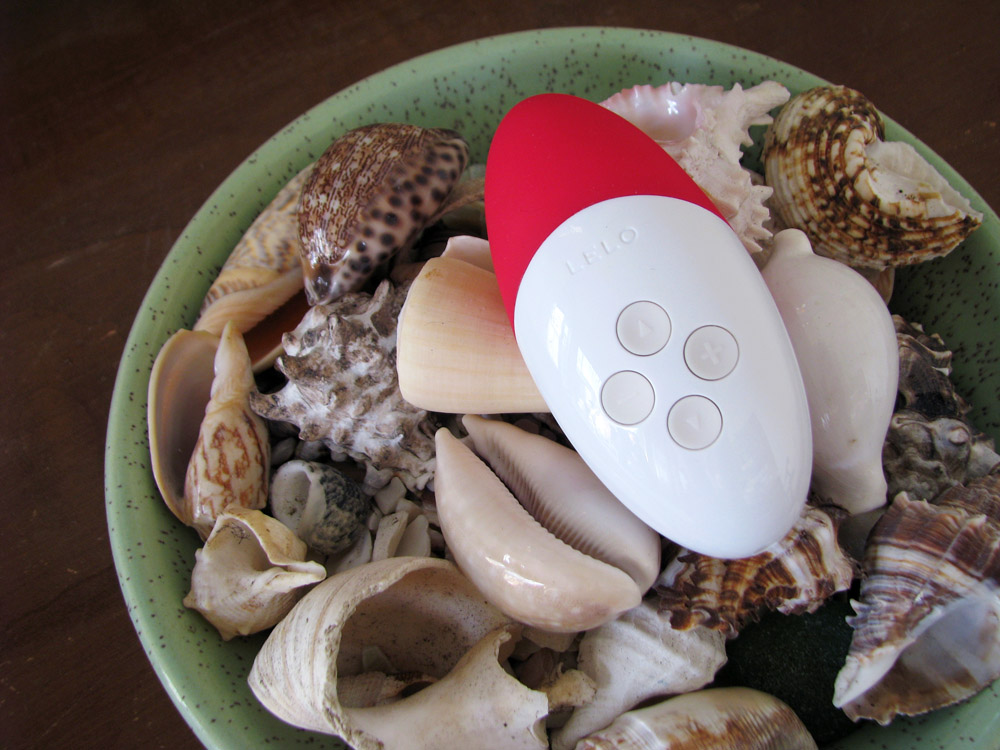 There is an updated Siri and I liiike it — read my review of the LELO Siri 2.

Siri is a new release from LELO made specifically for clitoral stimulation. Siri is futuristic and adorable, small and perfect for grasping. I am, admittedly, swayed a little by aesthetic beauty, but power is always the dealbreaker. I was hoping Siri would work well for me, but coming on the heels of my latest clitoral vibe — the Fun Factory Spring — I wasn’t too optimistic. The Spring gets me off, but it doesn’t thrill me. Siri, luckily, comes closer to thrilling me.

Siri is shaped like an elongated egg — 4″ long and 1 3/4″ wide at its widest — and it’s quite cute. I snagged the bright red version, but it also comes in pink and purple (why it doesn’t come in lime green, orange, or turquoise is a mystery of the world). The red part is covered in silky 100% silicone, while the white part is plastic. The entire toy is rigid and has no flex, including the silicone portion.

As far as features are concerned, the Siri has almost all its bases covered. It has six vibration modes and about five vibration intensities. It charges in 2 hours, then claims to run for 4 hours; I’ve used it 5-6 times and the battery has not died yet — or even alerted me. Awesomely, if the battery is running low, the LED will glow red. Siri can be locked, and it is meant to hold a charge for up to 90 days. It comes with a one-year warranty and 10-year quality guarantee (if your toy goes kaput within 10 years, send it to LELO and they will give you 50% off your next purchase). Oh, and a white satin storage pouch.

The elongated egg shape is pretty damn ergonomic. I had fears about pressing buttons accidentally, but that hasn’t happened once — despite my fingers resting precariously on that area when I use the toy. LELO made a good move with the recessed buttons that require a slightly longer press to respond. Best of all, I can manipulate the controls without looking.

What I really like about Siri, though, is that the vibrations are on the surface, not buried beneath a layer of squishy silicone. I don’t have to overexert myself pressing Siri into my clit — it makes contact on its own without much trouble. And, miraculously, it feels neither too small nor too big. I thought it might feel too wide, but it nestles effortlessly between my labia, and I never have to think twice about positioning.

And the vibrations are quite pleasurable! Sure, I usually start on level two or three, and I almost always turn Siri to the highest level when I come, but I’m alright with that. It could be stronger, but since I rarely wish I could turn it up further, it’s not worth bellyaching about. The vibration patterns are nothing special, except for the last one, which is unique and unpredictable — but still not fast enough for me to truly love it.

I did a test against Lily and Nea (LELO’s older clit vibes) at a local shop, and Siri out-performs them for sure. Siri is stronger, doesn’t have that obnoxious high-pitched whine to it, and is bigger — which I see as a plus, since Nea and Lily are so freaking tiny and potentially slippery. Siri is about as powerful as Mia 2, but it’s nowhere near as strong as Mona 2 or the We-Vibe Touch and Tango.

One thing that might be worth bellyaching about, though, is that Siri is not waterproof. Not in the least. I’m not dying to take this in the bath or anything, but for $100, it’s something that makes me say “really, LELO?” In fact, the charging port on Siri doesn’t even have a cover at all. And the manual states ominously, “Avoid submerging and getting water into the DC socket or around the buttons.” So basically, don’t get water on the plastic parts. Yeah… this is problematic when lube inevitably migrates up onto the plastic. Wipes and/or toy cleaner are best for this one, not running water.

But overall, I’m pleased with Siri. Its greatest triumph is its shape, which feels natural both in the hand and against the clit. Is it the clit vibe to end all clit vibes? Not quite — it would need to be waterproof and have more power. But it’s really a nice little toy nonetheless. Also, if you happen to be making a kinky Easter basket for someone? Tuck Siri in among the eggs. For the win.

Get the LELO Siri at one of my fave shops:
SheVibe, LELO, Babeland, Good Vibes, or Lovehoney (international).