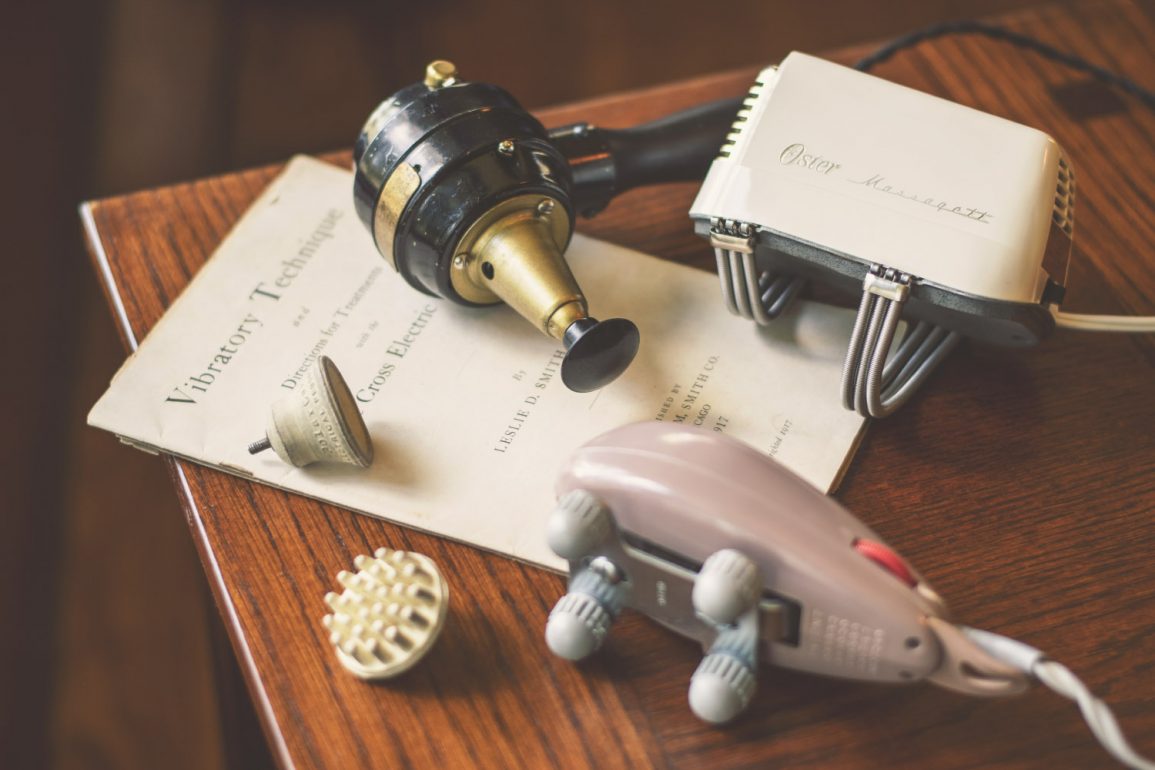 I published this on April Fool’s Day ’cause it’s fun, but everything here is real. I tell no lies.

But that was the beginning of it — hand-cranked vibrators were out, electric vibrators were in. Please note there is no evidence that doctors in Victorian times used vibrators on “hysterical” patients to induce orgasm — I know we all loved that story, but it’s an unsubstantiated hypothesis. It is true, though, that vibration was en vogue, hailed as a miraculous cure-all. It was like manual massage, but easier! More exciting still: vibrators were powered by electricity, a mysterious force that was also being lauded up the wazoo for its supposed therapeutic powers.

It was a booming time for quack medical products, such as Dr. Scott’s Electric Corset and the product most coveted by serial killers, the Electric Flesh Brush (neither of which were actually electrified — only magnetized). Dr. Young’s Rectal Dilators claimed to cure most anything, from constipation to insanity, boasting that the rubber devices would “reach the vital spot.” That’s what I’m gonna call the prostate from now on. Dr. Sanden’s Electric Belt, with a looped electrode for sending an electric current through the penis, was billed as “a never failing cure for the weakness of men.” Clearly that didn’t work.

Then again, people were willing to try anything in those days before modern sex pills, including wearing a radium-soaked object against their testicles in hopes of improving sexual function.

Dude. Can we get 2019 husbands on board like this?

And of course, I’m going to have an orgasm with this thing. An orgasm that transcends time. That’s what all of this is about.

The Polar Cub does not have a traditional power plug. Instead, it screws into a lightbulb socket.

So I can cancel my $460/month health insurance now, yeah?

The Massagett comes with a one-year warranty, which unfortunately expired about 50 years ago, and a list of Oster Authorized Service locations, including a Portland address that’s only 2 miles from me — if only it hadn’t been replaced by a brewery by now. So I guess I can’t waltz in there, plop the Massagett on the counter, and ask them to service it. I mean, I could, but I shouldn’t.

“Massage can be applied over clothing,” the Massagett’s cheery, purple-hued manual advises, “but it is most effective when applied directly to the body.” There is a six-step process for facial massage, which seems excessive, and then my personal favorite: GUM MASSAGE. When I showed the Massagett to my dad, he lit up and said they use vibrators like that for neck and shoulder massage at a barbershop in town. (He loves the massage, but doesn’t go there anymore because they charge too much for haircuts.)

I voiced this desire to my partner who was sitting beside me at the time, and he immediately grabbed his laptop and got to work. Starting with Wikipedia’s list of defunct department stores, he found Valu-Mart, a chain of discount stores in Oregon and Washington. The eBay seller I bought the vibe from was in Spokane, so this lined up. Then, Kynan hit the jackpot: a copy of the Spokane Daily Chronicle from 1966 showing the matching VM font from the price sticker. (A paper from 1965 shows a different font, as does one from 1967.)

Yes, we squealed. Who doesn’t love an internet hunt with a satisfying ending? We’re like Nev and Max up in here!

Knowing the Massagett was purchased locally should’ve endeared me to it, but in actuality I hated using it. Its heft is endlessly palpable as it perches atop my hand, and when the vibration is switched on… oh lordy. It’s loud and grating, and it reverberates through me. Top heavy as the Massagett is, it kinda holds on for dear life, even if I tip my hand downward, like toward my nether regions.

I guess the Polar Cub spoiled me, with its straightforward and sensical design. The Massagett, meanwhile, wants to be my new robot overlord. Its vibration is low and rumbly, but completely inscrutable. Surely some is transferring into my fingers, but my brain can’t separate that sensation from the OVERALL JOSTLE of my hand. The only orgasm I had with the Massagett was from flipping it upside down and holding the corner of it against my clit.

Much like ill-advised modern vibrators, the Massagett only serves to complicate the process, not enhance it. I asked my partner to put it on his hand and show me what it would be like if I could experience only the genital vibration. He pressed his quaking palm against my vulva. It was much more pleasurable, but he got frustrated and switched it off after less than a minute. “That’s fucked up,” he complained. “I couldn’t feel anything my fingers were doing.”

Then, somewhere in Japan, the Vanguard Vibro-Massager happened. It has a unique four-point massaging shape and it comes with the coolest pale blue zipper case in the history of the planet. The box is simplistic, with the tagline “the most famous electric,” and its manual is nothing more than a sheet of paper, with no special massage techniques at all.

With the Vibro-Massager, I have the choice between low and high. Such luxury! An oddly-placed dial on the side toggles between the two, with an unfortunate “off” position between them which briefly ruins the mood. The motor is buzzy, but the vibration strength makes up for it, kinda.

The Vibro-Massager is a fine toy, but it’s almost too fine. At this point, if it isn’t impossible to orgasm with or doesn’t plague me with the pervasive sense that anything could go wrong at any moment, I’m bored. I’m not transported back in time far enough. I want to feel the struggles of the era, not the echoes of the modern day. And I want my hand to smell like grandma’s closet afterward.

At least I got a few orgasms out of it first.