The world’s FIRST and only REAL G-spot toy! Ever!!!

It’s called G-Spot Rx. What’s it going to do, write my G-spot a prescription? 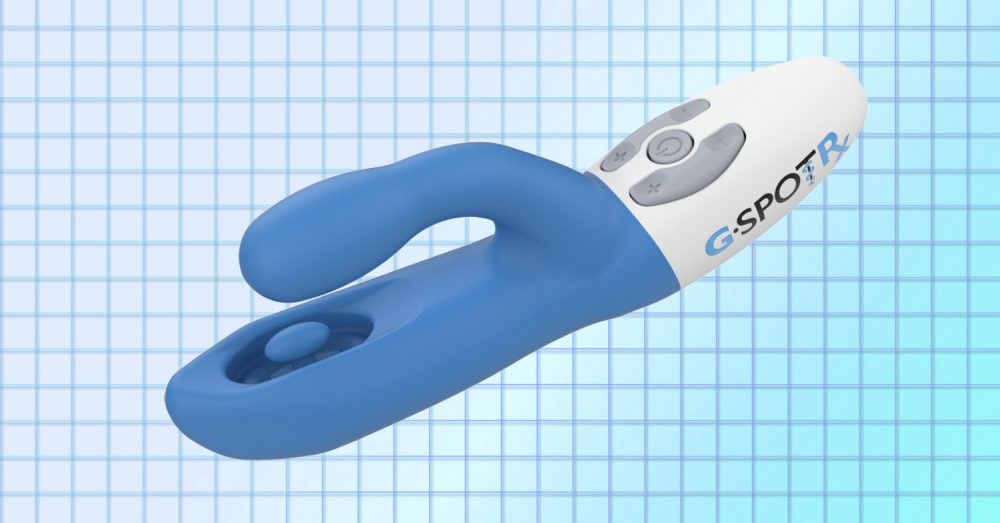 Revolutionary! Game-changing! The best! The first! The only! Companies have been wailing such nonsense since the beginning of time. Sex toy manufacturers in particular love to employ this sort of language, although usually it’s subtle and vaguely infuriating, not in-your-face and outright laughable in its shamelessness.

It’s called G-Spot Rx (the t has a serpent wrapped around it, in case you didn’t catch the medical reference), a name so unpleasant it makes me long for the days of the dorky G- prefix. It’s a dual vibe with a stark white handle, drab grey buttons, and a shaft in a clinical “you’re probably just stressed” blue. Because a reminder of the abject failure that is our healthcare system is exactly what turns me on! They’re quick to point out the toy is “OB/GYN and RN recommended,” too, as though this is a selling point. Ahh, memories of the doctor who asked me how many sexual partners I had and then quipped, “cleanliness is next to godliness”! Good times.

So, the ~revolutionary~ technology is a generic rabbit vibe, a straight shaft, and a piddly nub that barely protrudes rocking back and forth from a gaping receptacle that’s sure to collect vag juice. Anatomically, it doesn’t make much sense; the G-spot is on the roof of the vagina, behind the pubic bone, which is why so many toys feature upward curves and bulbous heads to reach it.

But according to the company, all the toys that have come before are shit. Their website is the most cliché back-patting boast-fest I’ve seen in a while, and that’s saying something. It’s a caricature of itself. It’s like the Sex Toy Claims bot come to life.

It’s SO different from all other products out there that it was almost easy for us to get a patent (once we could describe it properly to the patent people).

Imagine trying to explain, “sliced bread” or “cell phones” before they existed? We think this is going to be that big of a deal, too. That’s also why we’re so certain you’ll thank us for this amazing invention, we’re already saying “You’re Welcome!”

Just a guess, but it seems like this company might be bad at marketing. They’ve already gone on a Twitter rampage, spamming everyone from sex bloggers to Lady Gaga, Rihanna, Katy Perry, and… Jim Beam. They barged into my mentions, announcing “I see you love the G Spot. Here is a revolutionary leap! Here is BIG NEWS!” I replied that I do love the G-spot, but I also loathe rabbit-style vibrators. They countered that their toy isn’t a rabbit (it is), then tried to convince me that Fun Factory’s patented, self-thrusting Stronic line is just the “same old stuff, curved this way, curved that way, old technology. Pretty, but nothing innovative.”

Funny thing is, if somebody did manage to invent a sex toy that felt like perfectly-curled fingers against my G-spot, I’d be the first in line to check it out. Mimicking this sensation in a toy still eludes us, perhaps because it may never be possible to replicate the natural fluctuations of human touch in a sex toy. And that’s fine! [grabs a megaphone] Sex toys do not have to be modeled off human abilities to be good!

SORRY ONE MORE THING, I almost forgot to show you the “variety” of attachments available for the G-Spot Rx:

What are you in the mood for tonight, honey: stubbly, stubbly yet blunt, or SPIKES?

One of their tweets smugly asserts, “Every sex toy store will have this.” Oh yeah? Let’s make a bet. 50 bucks says your crowdfunding campaign will not reach its goal and this toy will not end up even being widely manufactured, let alone stocked in any reputable sex shop. I’ve seen this story play out time and again, and it will not end with you revolutionizing the sex toy industry as we know it. So turn your flailing down several notches. Doctor’s orders.