Like being fingered by someone who is absent-mindedly planning out the pizza they’re going to order after I finally fucking come. 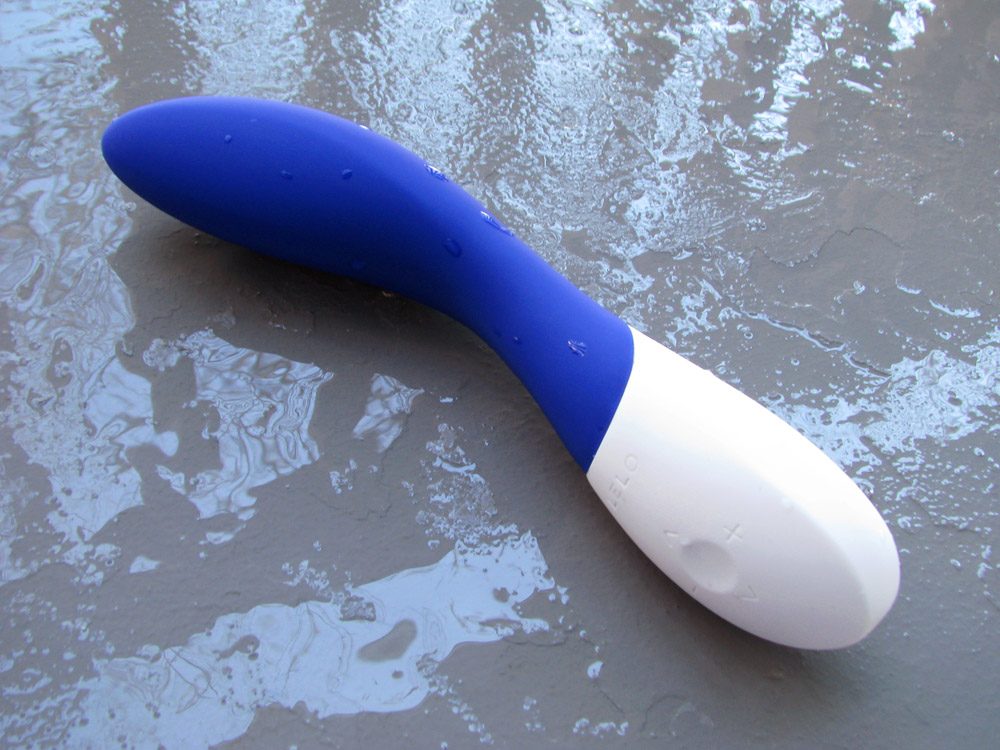 The LELO Mona Wave feels like being fingered by someone who is absent-mindedly planning out the toppings on the pizza they’re going to order after I finally fucking come.

I know that isn’t what you want me to say. You want me to say that either the Mona Wave is like being fingered by the devil, or that it’s the sexual equivalent of getting inducted into the Rock and Roll Hall of Fame. It is not, and my feelings are not that extreme. But the Mona Wave does make me fucking crazy most of the time.

I don’t blame you, internet. I have conditioned you to care. I am so freakishly obsessed with my LELO Mona 2s (yes, I have three of them) that you needed to know about the Mona Wave the moment it was released. Readers have not prodded me so much to review something since the Deen Peen. So I should probably just answer the question you are frantically Googling/e-yelling/tweeting at me, which is “SHOULD I GET THE MONA 2 OR THE MONA WAVE?”

The answer is, get the Mona 2. For sure. The Mona Wave is more convoluted, more expensive, more difficult to use, and most blasphemously: its vibrations are exponentially weaker. It eclipses the Mona 2 in only a few ways: it has a slow up-and-down movement meant to mimic fingers against the G-spot, it remembers which setting I was on, and it comes in black and blue. That… is… honestly… it.

When I first heard about the Mona Wave, I had two important questions: can you turn the motion off and get just vibrations, and can you adjust the motion? The answers are yes, but the vibrations suck and not really, since the two motion speeds consist of “molasses” and “snail.” This is where the Mona Wave could have surpassed the Mona 2, but instead just fucked up.

The Mona Wave has 10 settings. Five are motion plus vibration (the usual steady, pulsation, escalation), one is just motion, and four are just vibration. The handle is all silicone now, and the buttons are no longer raised. Some people like this change, but I find it harder to grip than Mona 2’s glossy plastic handle. True story: one time I slid the Mona Wave under the covers and inserted it — only to realize I’d inserted the handle. I was sober.

The buttons on the Mona 2, fallible as they are,1 are drop-dead simple to find and master. It’s to the point with the Mona 2 that I can change settings with my eyes closed, on the verge of orgasm, during hazy post-orgasm bliss, etc. This is a feat you don’t appreciate until it’s gone. With the Mona Wave, I feel like an amateur poking around in the dark.

But the most unforgivable sin: the Mona Wave has almost half the vibration power of the Mona 2. I’m serious. I’ve done tests. I had my partner close his eyes and I turned both Monas to high, pressing each into his palm. It was undeniable to both of us. I yelled “FUUUUCK!!!” and I felt ruined. It was like the time my boyfriend broke one of his favorite mugs and then just stood in the kitchen with the most crestfallen look on his face. Of course, in that case I was able to rush to eBay to order him a replacement, but if you buy the Mona Wave instead of the Mona 2, you won’t be able to time travel and reverse your choice. At least cheaply.

Do not misunderestimate this power difference. Mona Wave’s vibrations are just a hair stronger than the original Siri, and Mona 2 has about four higher intensity levels than Mona Wave. This massive gap has been confirmed by many a seasoned vulva, and even a civilian — my boyfriend. I didn’t tell him which toys we were testing, just had him close his eyes and tell me if they were different or the same. “Oh, the second one [Mona 2] is stronger,” he said without missing a beat. “Noticeably stronger.”

Because of this, the Mona Wave is on the verge of useless when used clitorally. The added movement is nice — kind of like a big finger or rigid tongue moving rhythmically against my clit. With improvements, it could potentially be a way less annoying Ora. But it needs more: more strength, more speed, and above all, more variety.

This deficit is even more apparent when using the Mona Wave internally. Wave truly is the right word for the movement. It is subtle. Gentle. Like the soft ebb and flow of the ocean against the shore. I can leave it in my vagina without touching it — mostly — but it does start to twist sideways sometimes.

The motion feels good, especially with added vibration, but it really just grazes my G-spot. After not long, I want more. More curling, more pressure, a quicker pace — something. I can change the vibration pattern that goes along with the motion, but otherwise there is no progression toward that “orgasm to end all orgasms” promised to me by the packaging. (Which, can we talk about that slogan? Why would you want to end all orgasms? Why would you put your toy on such a pedestal? Granted, “it feels pleasant” doesn’t have the same ring to it, but maybe cut the bravado?)

This video features the Mona Wave on its fastest motion setting, which I feel like looks impressive until you mimic it with your fingers. You can see, then, how this toy feels nothing like being fingered. It’s like what aliens might design based on a cursory understanding of the G-spot. Because G-spot stimulation isn’t just a mechanical up and down movement. It’s thrusting, twisting, pressing, rocking, jostling, clenching. It’s the curling of fingers and the grabbing of the pubic bone. It’s a combination of these things, depending on my mood, and my cycle, and whether anything on the internet has pissed me off that day.

That’s why the LELO Mona Wave is so fucking FRUSTRATING. For perhaps the first time ever, I find myself mad at a toy for not being human. For not understanding that I’d be much closer to orgasm if it would just speed the fuck up. I usually relish the consistency provided by a sex toy, but with the Mona Wave, I am enraged by it.

Also, that sound. Doesn’t exactly sound like water serenely lapping against the sand, does it? Yeah. I previously likened the noise to a dental drill, in case you need to have nightmares tonight. Maybe it wasn’t aliens that designed this toy, but robots. It’s not the worst sound ever, but I would never endure it if it didn’t come bundled with sexual pleasure. The walls of my vagina don’t really muffle it, either.

I kind of don’t think anyone should buy the Mona Wave. Not because it’s a horrible toy, but because I can’t shake the feeling that LELO released it before they really took the time to perfect it. The noise, the weak vibrations, and the lack of motion options are glaring issues that sorely need to be addressed before the company can rightly ask $179 for this thing and plaster it with branding guaranteeing a life-changing orgasm. This is like if Fun Factory had released the Stronic with only two slow thrusting settings. Come on. Do better.

I have grand dreams for the LELO Mona Wave, dreams that I do not believe are out of the realm of possibility in the current age of vibrators, dreams which you are welcome to get me drunk and listen to me exasperatedly list off.2 But I’m not in the business of rating sex toys on what they could be if only they tried harder. Right now, Mona Wave is just a half-assed impostor.

Get Mona Wave at LELO, SheVibe, Pleasure Chest, or Come As You Are (Canada).