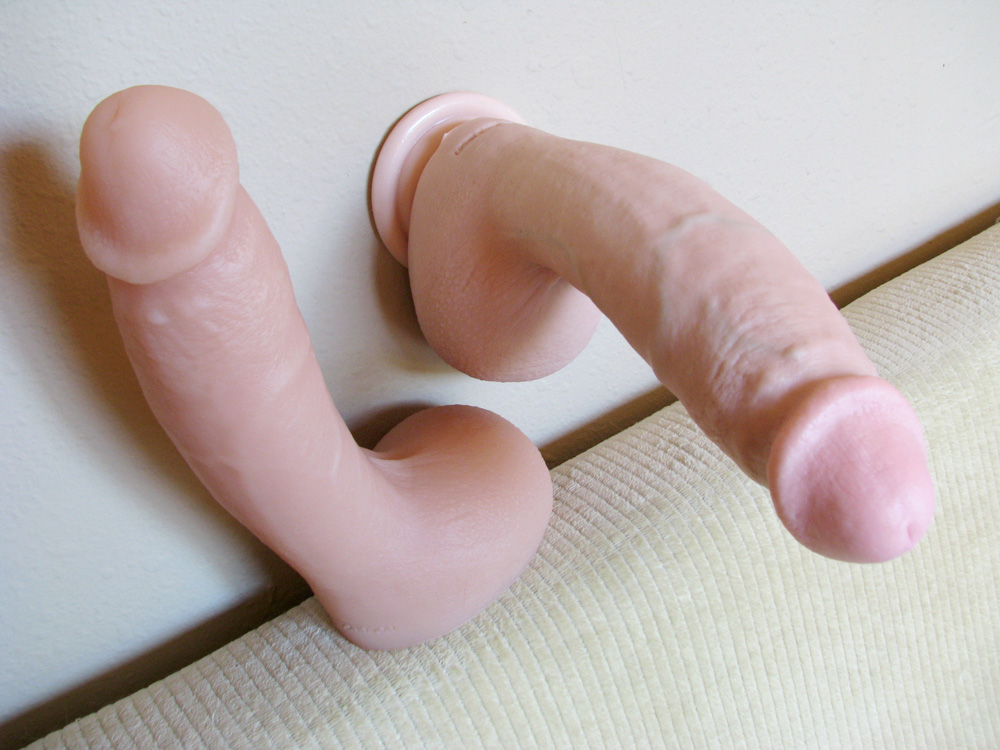 THE MOST ANTICIPATED SEX TOYS OF THE YEAR… WELL, ON TUMBLR ANYWAY.

The chase began with Doc Johnson’s ads and pictures of the molding process. Then ANME rolled around and the first photos of the toys popped up on Twitter. We were promised an August release date, then were distressed to hear it pushed to September. We got ants in our pants. We shivered with antici… pation. We fretted over potentially unsafe materials. And finally, a press release gave us aneurysms.

Always, it was not a matter of if I would review the Deen Peen — it was a matter of when. I even made an exception to my usual snooty sex toy reviewer policy of never reviewing porous things, in the interest of trying two versions of the toy — the PVC James Deen Signature Cock and the James Deen Silicone Cock. [Edit: at one point, they made a UR3 version too.]

And I know I have a lot to live up to. I’ve been told my word will be considered law and that this review will be the highlight of someone’s year, and I do not take this responsibility lightly. These 2,500 words are not fucking around. I refuse to disappoint or steer anyone in the wrong direction. I have done the appropriate testing, I’ve taken illegible notes, and I understand the gravity of what I am about to say.

Trust, though: I prepped for success. I looked up all the Deenagers’ favorite scenes, then I acquired the DVDs from SugarInstant and compiled my findings in a folder called “JD fodder.” I took the opportunity to just go balls-to-the-wall with the Deen watching. I watched him sweat all over Jesse Jane…

I watched him pet Stoya as she lapped up milk…

And I watched him fuck the fake eyelashes off Skin Diamond’s eyelids.

I’m sorry, my friends, for crushing your dreams.

Specs and comparison to the real thang

The Silicone Cock comes with a 3-speed bullet, which is silver, 5″ long, takes 2 AAAs, and IS A WORTHLESS PIECE OF SHIT. Its construction feels even cheaper than your average watch battery bullet. The batteries have to be locked into a plastic sleeve that slides into the bullet… AND STAYS THERE FOREVER. Ugh. I don’t want to talk about it anymore.

To make matters worse, Doc Johnson apparently expects me to use their included packet of corn starch to more easily insert and remove the bullet. What? Did they not get the memo that people use lube for that? Now I have corn starch all over my desk, and it looks like I just made a batch of cookies in my vagina.

Ironically, James Deen is not known for his dick. He is known for his love of burritos, adorable misspelled tweets, mesmerizing gaze that turns women into instant submissives, and proliferation of GIFs on Tumblr. In fact, Tumblr is filled with just as many of this kind of GIF:

As it is this kind of GIF:

PVC with Sil-a-Gel vs. Silicone

Yet they seem disinterested in making it clear to consumers just what the Signature Cock is made out of. On the back of the box they call it “our fifth generation Realistic material,” and one sentence later it’s “non-phthalate, body safe PVC; featuring our antibacterial Sil-a-Gel formula.”

I just call it “the porous one.”

Sil-a-Gel was a mystery to me (maybe because it’s fucking made up), but I found a quote from Doc Johnson’s Director of Product Development and Licensing explaining what it is:

Sil-A-Gel is an ingredient that we add to all of our PVC material during the manufacturing stage. It is not a material unto itself. It is anti-bacterial, cadmium and latex free and utilizes ingredients that are on the FDA Safe Ingredient List….that is where the SIL stands for. This was not meant to trick anybody into thinking that this was a silicone product. If you have a product that really smells terrible, we are very sorry. The smell of rubber can be off putting to some people, but it shouldn’t be worse than that. At the end of the day these are rubber based products.

For me, it’s been a stark reminder of why I don’t review porous toys. Sitting at my desk, I can smell it chilling 9 feet away in the kitchen. The smell has not lessened over time. Maybe I’m old fashioned, but I don’t think people should spend $60 on a sex toy that stinks up any room they put it in — 1.25 pounds or not, James Deen or not.

The silicone version is obviously taken from the same mold, but cast in a material that doesn’t allow for as much freakish detail, and is missing the hand-painted veins and glans. In a way, this is good, because it looks less like it was chopped off an actual human being. Also, it has no scent. Because it is silicone. And silicone has standards.

Real talk: I was expecting to be wowed by the sensation of the PVC cock. I was expecting to have a moral dilemma, because I thought the PVC would be really soft and luscious and I’d have to admit that maybe people should buy something porous and smelly.

What really annoyed me was the drooping in the shaft, as demonstrated in the hilarious picture above. That angle, coupled with the girth, makes insertion hellish, and thrusting very difficult. Plus, the PVC cock’s suction cup is pliable, so it’s a horrible thing to try to grip.

So I did what you do: I took a poll. A handful of people loathe balls and a handful love them, while 45% of people said they can “deal with them as long as they aren’t a nuisance,” which is how I feel — if they are small or lightweight, I’m okay. But if they are the size of a baseball, then yeah, I have a problem.

ENOUGH ABOUT THE BALLS, THOUGH. How about a condensed list for ease of posting on Tumblr? I know you want it.

What you really should buy instead

If the experience of using these toys was seamless and wonderful, I’d be able to overlook the fact that they cannot stare into my eyes, rub my clit, eat burritos with me, and murmur sweet nothings against my ear. But the experience was shitty, and the Deen magic is gone.