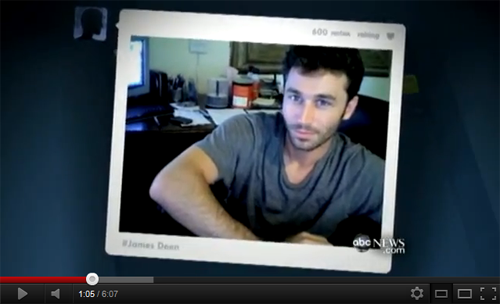 Epiphora: oh my god dude
Epiphora: i’m losing it
Epiphora: THE PART WHERE THEY TALK ABOUT BURRITOS.
The Bedroom Blogger: I know. I was laughing so hard watching it that the cat actually got all pissy and stopped being a scarf

(Bitches don’t allow embedding, but trust me, it is well worth clicking over to YouTube.)

Terry Moran starts us off by uttering the word “blogs” with more disdain than I’ve ever heard injected into a word. “For any parent concerned about what their teen does online,” he says, “the huge popularity of the young man you are about to meet may be deeply disturbing.” One minute later, the fact that Deen has fans under the age of 18 is again called “disturbing.” Nice thesaurus work, Nightline.

A few of Deen’s fans are interviewed. One chick says she loves his nose, while another says, “he looks like somebody that I could see at a coffee shop or something and actually approach.” Listen to these sex-crazed lunatics. This is what our little girls have become.

What this report is missing, of course — I mean, other than a sense of decency — is that James Deen’s fanbase is not all underage girls. SHOCKING, I KNOW, but there are actual adult women who also love him, for the simple fact that he seems to really enjoy fucking his co-stars. There are vague hints of this in the segment (they say he “holds hands with his leading ladies, gazes into their eyes, even shows a little romance” — could they make it sound any more boring?), but they’re glossed over, because god forbid porn be portrayed as enticing in any way.

Example: a few days ago, my friends and I were watching a scene between him and Melissa “The Face” Monet (from My Daughter’s Boyfriend). Even fucking a woman who looks like she’s giving birth to a demon when she has an orgasm, he seemed totally into it. When she came, he whispered to her that her orgasm was “beautiful.”

The only thing we should be worried about is that our daughters might have high expectations for their future sex partners after watching James Deen.

And wouldn’t that just be catastrophic.