It has 12 vibration patterns, apparently. That’s nice. I can barely feel them. 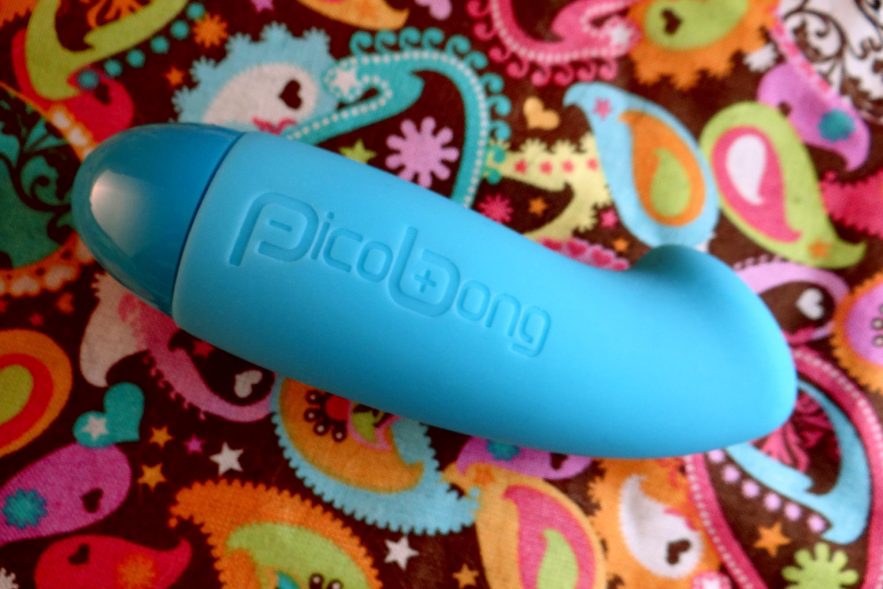 Photo by Mandi at EROcentric, used with permission.
Update: The Kiki sucks, but the Ako doesn’t. 1 AAA makes all the difference.

I was going to ignore PicoBong altogether. Although I was initially drawn to the brand because, well, LELO invented it and some of the toys come in turquoise, I quickly found out that some of the toys were about as stimulating as rubbing a rock on your genitals. Besides, I give the side eye to anything that takes a mere one AAA.

But a rep from PicoBong emailed me, and despite my prediction that I’d hate anything in the entire line, they sent me the Kiki. Which is good, I guess, because y’all deserve to know just how much of a waste of time this toy is.

The rep told me that PicoBong toys are geared toward people who have “not yet mastered the art of self-loving.” And sex toy apologists tend to veil the truth by saying Kiki is “great for warm-up” or “good for beginners.”

All of this is patently FALSE. You know what’s actually great for warm-up and good for beginners? Other vibrators that will actually get you off. It’s more than a little insulting to assume that beginners require only the faintest of vibrations. They need to have an orgasm, not feel a very slight tingle between their legs. And don’t listen to the reviewers that spout sugar-coated nonsense; they are grasping at straws, plain and simple.

I cannot write a positive review of Kiki because the good things about it (shape, color… uh… maybe those are the only things) are wholly overshadowed by the shitty things about it. Like, it has 12 vibration patterns, apparently. That’s nice. I can barely feel them.

This is not to mention all the absurd and infuriating marketing strategies PicoBong has employed. Such as naming their company PicoBong.

Laura: wtf is a Picobong
Laura: why did they choose that name
Laura: I keep picturing a 1:16 scale pot-smoking device

And of course, the godawful “C-Spot” thing. PicoBong has made much ado about the fact that the brand is for hip, inexperienced youngins. In keeping with this, or something, they continually call the clitoris the “C-Spot.” Jesus fucking christ. Cosmo and Oprah do a good enough job forcing disgusting lingo into the American vernacular without your help, PicoBong. PLEASE. What did the word “clitoris” ever do to you?

The PicoBong Kiki is 100 times more irritating when you consider its ridiculous price tag of $39. What the fuck am I paying for? No. Don’t even swindle me like that. Because rather than including a storage bag or battery, PicoBong thought it a better use of their resources to produce a six-sided die with silhouettes of their toys on it. Yeah, that’s not pretentious or anything.

Anyway, the LELO Mia is a few bucks more, and it’s USB-rechargeable and much stronger. Awkward that I’m recommending a toy from virtually the same company, but there you have it. Further, I can almost guarantee you that any inexpensive bullet that takes 2+ AAs (such as the Babeland Silver Bullet) is gonna be stronger than the Kiki.

What a sad state of affairs. I get the nagging feeling that PicoBong spent a lot more time on marketing than they did on making quality products. Maybe, instead of hiring a video game designer to create a shitty Pac-Man knock-off on their site, they should’ve paid some people to give feedback on their toys. Now, it feels far too late.

Update! Some PicoBong toys are actually not worthless. The secret is to get one that takes 2 AAAs. I’m a fan of the Moka and Ako.