The Mystic Wand is a damn good sex toy. Powerful, lightweight, easy to use, body-safe — it just gets things right. 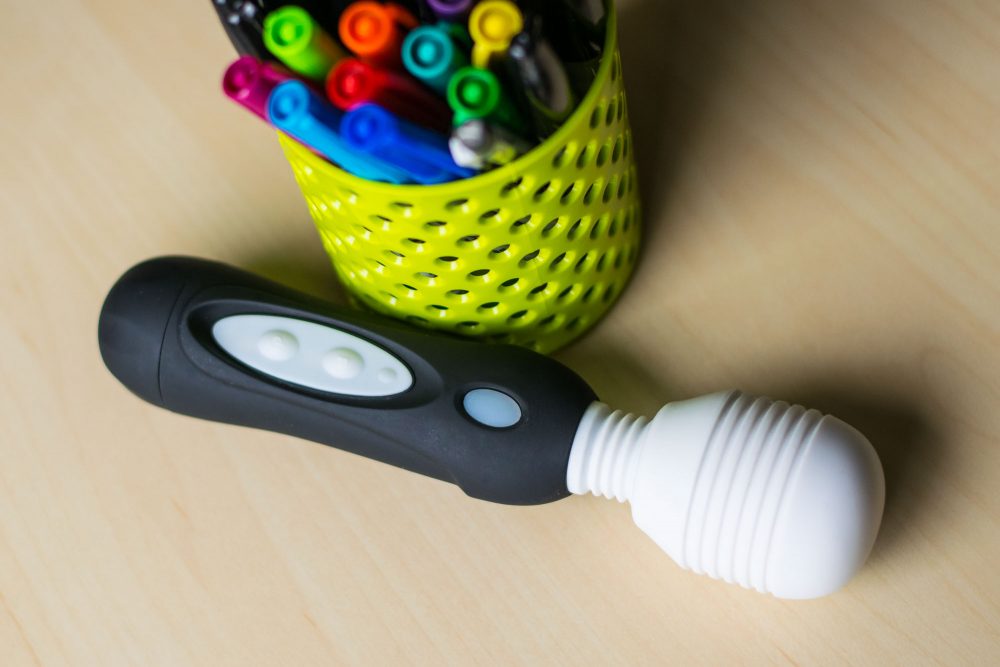 The Vibratex Mystic Wand is a damn good sex toy. No caveats, no horror stories. It just gets things right. Replace the entire text of this review with “IT RULES,” and that would sum up my feelings about the Mystic Wand.

Where so many other toys fail, the Mystic Wand succeeds. Batteries are a breeze to insert into this toy. The cap is easy to screw on. Buttons are fun to push. Settings are very perceptible, thanks to enjoyable color-coded lights. I don’t have any trouble grasping the shaft. It’s not too heavy. The head isn’t too big. The vibrations are strong, and they don’t transfer to the shaft, so there’s no hand-numbing. Also, the Mystic Wand is made of good materials: its flexible head is made of 100% silicone (I did a flame test to prove it) and its shaft is made of silky plastic.

The more I think about it, the more badass the Mystic Wand is. At its essence, it’s a smaller clone of the popular Hitachi Magic Wand. These days, it’s become easy (and sort-of rampant) to make small, wand-style toys. But it takes actual thought to invent something that is a serious improvement.

The Mystic Wand takes batteries rather than plugging into the wall. 4 AAs, amigos. As much as I adore some of my powerful, corded toys like the Eroscillator and Wahl, it is refreshing not to be attached to a wall with the Mystic Wand. No plugging in. No cord awkwardly snaking around my body. Best of all, no cord that I must find a way to store. Also, as much as I love rechargeable toys like the rechargeable Hitachi, there’s something to be said about not having to worry about whether my toy is charged before I use it.

But, of course, the Mystic Wand’s main attraction is its vibration strength. And let me just say… vibration setting #1 is fuckin’ awesome. It’s rumbly and deep; neither weak nor strong, but a nice strength for easing myself into stronger vibrations later. Truth be told, I use this setting quite a bit because it feels far more rumbly than the other settings. I can get off on it, but I usually switch to one of the two higher speeds (both are very buzzy) when I’m about to come.

The head of the Mystic Wand is 1 5/8″ in diameter. I was afraid it might feel too big and/or numb my vulva, but that is rarely the case. It’s a nice size.

Usually I don’t give a shit about vibration patterns, but this is an exception. When the patterns are uber-strong, my mind changes. Especially when the pattern doesn’t leave much space between blips. So the fast pulsation setting is pretty amazing. If I want to get off on a vibration pattern, that is the kind of stuff I want. Thanks again, Mystic Wand, for getting it right.

It’s also unfair to compare the Mystic Wand and the Hitachi in terms of noise level. The Mystic Wand has a low-pitched buzz to it, while the Hitachi has a distinctive high-pitched whirr. Both are loud, but one will likely annoy you faster than the other (cough — Hitachi — cough).

A couple more things you might want to know: the Mystic Wand comes in a transparent plastic box. It comes with a velvety black storage bag, but the bag sheds gross velvet babies all over the toy. Both the wand and the bag come individually sealed in plastic. Out of the box, the Mystic Wand smells of plastic, like bouncy balls from quarter machines, but the smell mostly goes away with a wash.

Also, the Mystic Wand is splashproof. The manufacturer does not recommend using it in the shower or tub, although I know someone who has. In any case, the Mystic Wand features a solid O-ring, and I’ve been cleaning it by dousing it with running water.

The Mystic Wand is truly awesome: powerful, easy to use, hygienic, and with badass vibration patterns. It’s one of those toys that restores my faith in sex toy manufacturers. Applause for you, Vibratex.

Get the Mystic Wand at SheVibe, Pleasure Chest, Peepshow Toys,
The Pleasure Garden (UK), or Come as You Are (Canada).