A “self-exploration” tool made of plastic tubing that comes with a “note on empowerment.” 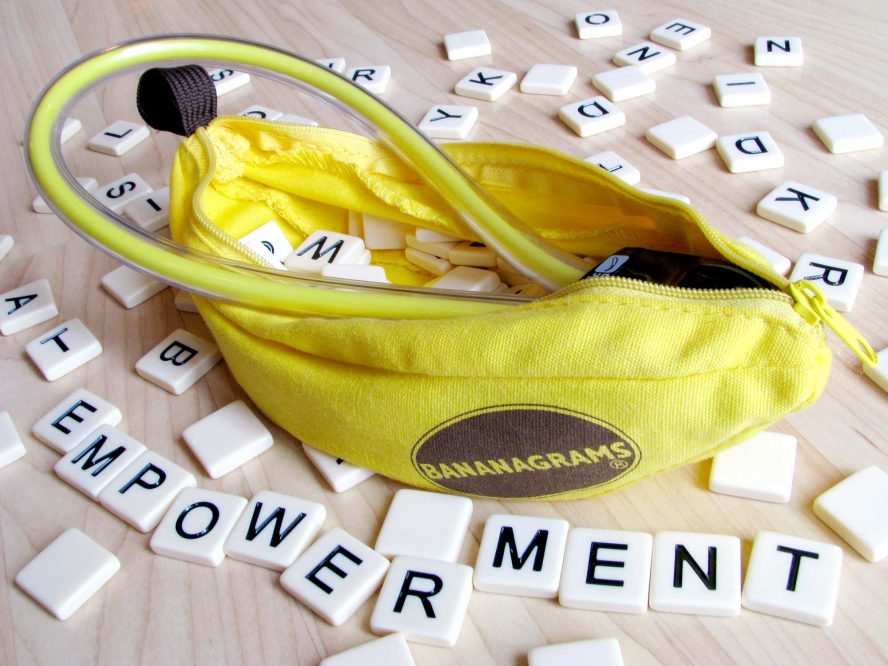 Have you ever looked at a jump rope, bike lock, thighmaster, or lasso and thought, “oh hey, I bet that’d be good in my vagina”?

And so, I was prepared to hate the Magic Banana, because:

Truth from a friend: “I feel like that’s not how empowerment works… people don’t mail it to you.”

Shrink wrapped in a box patterned like a banana leaf, the Magic Banana is simultaneously hokey and woo-woo. Like, the manual actually has a section entitled “Getting to Know Your Magic Banana.” The creator of this toy is Janeson Rayne, a “yoga educator, veggie chef, fine artist, and mom,” and her face is splashed all over everything, in a way that kinda starts to feel like your mom is watching you masturbate and giving you disturbingly specific G-spot tips. This toy is a “self-exploration tool,” I am told over and over, as though I’m about to enter a sweat lodge and find out who I really am. The advice is mostly inoffensive, except when it claims that the Magic Banana can induce clitoral orgasms, and when the word “breathe” is used instead of “breath.”

However! Underneath all the fruit and yoga references, there’s a sex toy that at least does something different. The problem is that it’s as overpriced as organic food and fine art.

Touted as both a kegel exerciser and a G-spotting implement, the Magic Banana is made of medical grade plastic tubing — which was confirmed as non-porous only after the woman who created it asked the manufacturer. It reminds me of those sweet-ass jump ropes in grade school, only not nearly as floppy. My boyfriend didn’t realize it was a sex toy at first (which, how? Every new thing I ever acquire is a sex toy), so I guess in some world that would make it “discreet.” Only it’s far too odd to be overlooked.

As you might imagine, the Magic Banana is a treat to insert. You have to pinch it together and drizzle the lube just so over the loop. Once it’s in, I suggest keeping it there until you’re done. Otherwise you’ll be tasked with re-inserting a lubey tubey mess.

Use #1: For the “inner magical muscles.”

Uh, yeah — PC muscles. Sure, it doesn’t try to escape my vagina. Sure, it physically moves down and up when I squeeze it with my muscles, as a lot of things would. But it feels like nothingness. Now, if there were a gauge on the end telling me how much pressure I was exerting, then I’d be impressed. Otherwise, the Luna Beads are a lot more fun and don’t require me to take time out of my day to sit there slack-jawed and flexing.

Just clenching it does little for my G-spot, unlike with toys that are curved or bulbous on the tip. The stimulation here comes from movement, because I can feel it expanding slightly against my G-spot as I tug on it. It isolates the G-spot stimulation, giving no vaginal wall stimulation at all. Truth: when I fuck myself furiously with it, it’s kinda great. I can even get really into it and nudge my cervix.

I keep thinking, this is a G-spot toy for people who don’t want to feel anything. For people who want G-spot stimulation but don’t want any sort of perceptible girth. Literally, even the diminutive Tantus Acute feels bigger than the Magic Banana.

I have a theory that the Magic Banana could help folks find their G-spots, but I’m 5 years out from finding mine and in no position to be making pronouncements like that, especially considering the lukewarm reviews I’ve read from people I trust. So, until I read a report of someone discovering their G-spot thanks to the Magic Banana, I remain skeptical.

Use #3 (invented by me, you’re welcome): Vaginal clog removal.™

This thing lassoes the blood and vag gunk right out of me, making the towel look riddled with blood spatter. However, this talent makes the Magic Banana amazing for removing errant things from my vagina. It was able to corral and remove tiny ben wa balls from deep inside of me on the FIRST TRY, and I bet it would also work well for sweeping out a menstrual cup.

But I keep coming back to the price. $69? Really? Assembly of the Magic Banana cannot take more than 5 minutes. They probably glue each end of the tube into the handle and call it a day. If this were $30, I’d say go for it. It’s a different sensation, something weird to add to your toybox, but not for $69.