This “FitBit for your vagina” helps improve your pelvic floor with vibrational biofeedback and phone games. How high can you score?

The kGoal is comprised of two parts: an insertable squeeze bulb and a clitoral arm. Each has a motor (toggled on or off with the app), and they vibrate in response to pressure on the bulb — technology that Minna pioneered in their previous toys, the Ola and Limon. The kGoal is made with matte silicone and charges via USB, but it is not waterproof. It retails for $149. (The phone app, at least, is free.)

Over the years, various fauxnnovations have attempted to incentivize and measure kegel exercise, but it has never remotely worked. The VR1 balls were supposed to vibrate when squeezed, but didn’t. The Intensity forced my body into doing kegels by electroshocking my vaginal walls — not pleasurable. I even pounced on a set of old school pressure rods when I encountered them at a sex shop, only to discover that my champion vag couldn’t make the stupid gauge move even a millimeter.

With these as “competition,” the kGoal easily wins. The biofeedback from this toy is a revelation. There is no delay — it responds in real time. A light squeeze produces a low, barely perceptible buzz, and I only get the strongest vibration if I clench as hard as I can. Worn around the house, the kGoal informs me of all the times my PC muscle involuntarily squeezes, like when I laugh, walk up the stairs, or pick up something heavy.

I’m impressed by how much the toy latches onto me — it never budges. And the extended, broad clit arm reaches my clit reasonably well.

So even without the app involved, the kGoal is a powerful tool for measuring progress in real time. There can be no doubt about whether you are doing kegels correctly and effectively. Simply inserting the toy and experiencing the vibrational response is incentive to keep exercising — sort of like the Luna Beads on steroids.

There is much clamoring in the kGoal’s marketing about how the toy can be “customized to fit your body” because you can deflate and inflate the squeeze bulb at will, but that’s a little dramatic. The tip of the bulb is rigid and measures 1.5″ in diameter — there’s no changing that. Plus, deflating the bulb prior to insertion is not necessary for an accurate measurement, and the silver vent button is only easy to access if you don’t have fingernails. So I just keep my kGoal inflated at all times.

What does help with accuracy, though, is setting the baseline. Once it’s inserted and you’re relaxed, you quick-press the button on top of the kGoal’s arm (which should flash green). This calibrates the toy and ensures more precise measurements.

The kGoal app, at least for Android, is veryyy slow to update. It has a grand total of two workouts — and I’ve been waiting for them to add the second for over half a year. The original workout, Moving Target, is a 5-minute regimen of long, intense squeezes, quick successive squeezes, and particularly challenging “controlled squeezes” which require you to follow a moving horizontal bar as it rises and falls. It’s like one of those “love meter” things at carnivals that you hit really hard with a mallet. Only your vagina is the mallet.

This workout is surprisingly difficult… and surprisingly boring. 5 minutes is a long time, it turns out! I find myself glancing at the remaining time often. “Jesus, still 3 minutes left?” “Still 2?” “1?” “45 seconds?”

The second workout, thankfully, does not induce such yawns. In Shape Shift, you open a doorway with your vaginal strength to let a variety of shapes pass through. Rudimentary and Atari-like as it is, Shape Shift is a lot more fun than Moving Target, and offers more bedside manner with encouraging words along the way.

I won’t be truly happy until I can play Pong with my vagina, though.

The app is well-designed, if a bit sterile. I prefer sterility to over-the-top cartoonish bullshit, but a little personality might be nice. Functionality is fairly basic at this point, and it looks like they just added the ability to create reminders (on the iPhone app), so that’s good. Aside from more workouts to prevent monotony, I feel strongly that there should be a social element to this app. There should be a scoreboard where you can compete with your friends, family, and the guy who makes your latte every morning.

THERE SHOULD BE A WAY TO PLAY PONG WITH EACH OTHERS’ VAGINAS. 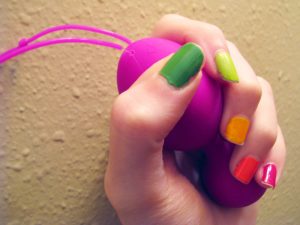 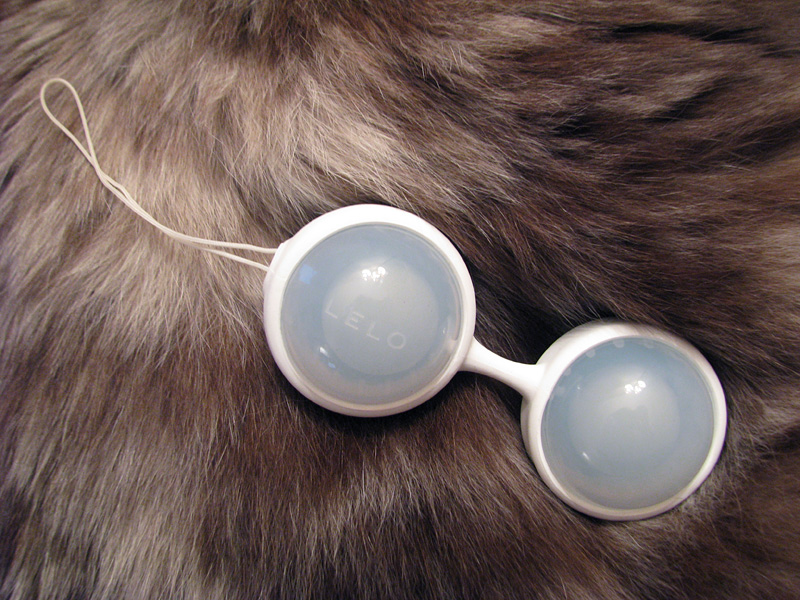 Because I’m me, I asked some of my sex blogger friends to try my kGoal too. Kynan got an 8.1, Lorax got a 7.8, and Kate got a 6.2 (“Kate, why was your endurance so terrible?” “I kept laughing”). These are no ordinary civilians, of course, so their scores are probably higher than average. My scores have ranged from 8.6 (a bad day) to 9.9 (after jacking off).

The folks at Minna said I was the first person they’d heard of with scores that high. They tried to calibrate the scoring system so that the average test user — comprised of people at various stages in PC muscle strength — would score 5 out of 10. To increase the difficulty, they suggested I do the workout while standing up or doing squats.

The kGoal is fun, but it’s not without its issues. The toy is only splashproof, which is awkward when I go to clean the vag juice off it, and its battery life seems kind of shitty. The tip measures 1.5″ in diameter, making insertion potentially uncomfortable for the exact people who need this toy the most. It’s loud, so wearing it discreetly at the office is out of the question. The app is buggy.

And if orgasm is high on your priority list, look elsewhere. The kGoal’s vibrations are pleasant and useful, but with no way to manually the control them, they’re not sustained enough for orgasm. I only got off with this toy once, and I had to squeeze at max while pressing down on the clit arm to get pressure. The vibrations didn’t falter, thank gawd, with the death-grip I had on the toy. But a constant squeeze is tiring as fuck, not to mention impossible for a lot of people to achieve. The vibrations in the clitoral arm are buzzy, anyway — not very satisfying.

Even as a person unnaturally obsessed with the goings-on of my vagina, I would never pay $149 for the kGoal. With that price and considering its caveats, this toy is currently only worth it for a limited range of folks. It’s more for people wanting hardcore kegel boot camp — like those on a physical therapy regimen, or those who have found other kegel devices lacking. Vibrational learners. People deeply motivated by scores and progress charts.

To appeal to a wider audience and truly become “a FitBit for your vagina,” as it’s been widely reported, the kGoal needs more social features and motivational tools. For instance, according to a special badge in my partner’s FitBit profile, he’s taken so many steps he could have walked to Italy by now.

I, too, would like to work toward an achievement. If it takes 500 kg of force to fracture someone’s skull, how many years will I need to diligently do kegels to create enough collective vaginal force to crush a single man’s head? Will I go to my grave without reaching this goal? I need to know.

Buy the kGoal at She Bop, Good Vibes, or Babeland.