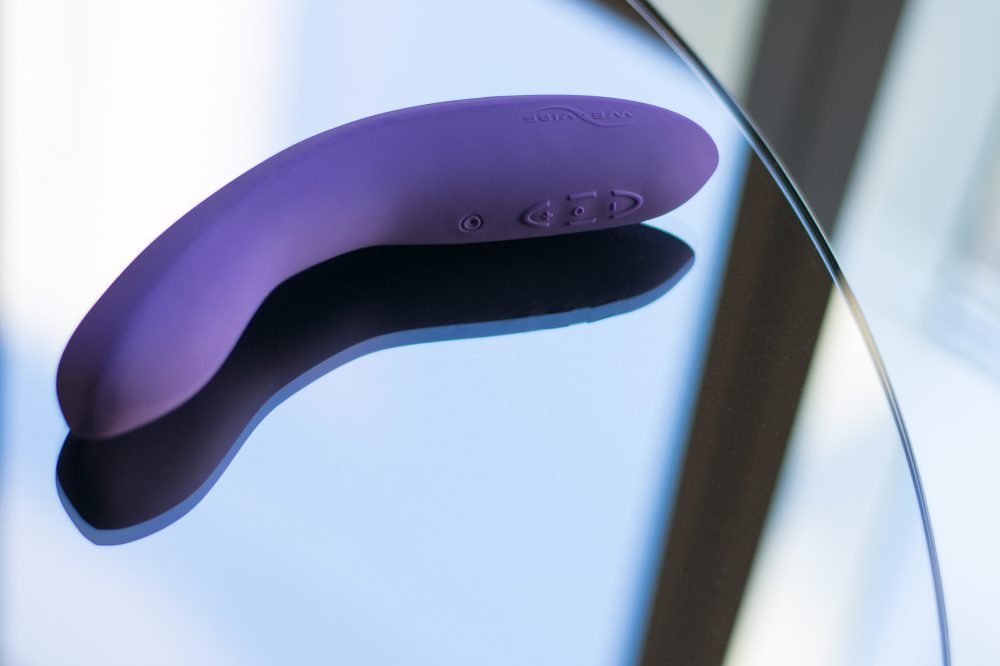 Yes. The word blossomed in my mind like food coloring in water. Yes, holy shit, it’s as good as I’d hoped. I came quickly, effortlessly. It was the fastest box-to-clit progression potentially ever — or at least in recent memory. The whole rest of the work day, I daydreamed about coming home to the Rave.

You have to understand how unusual this is. Usually I try something for the first time, get the general gist of it, and then ignore its existence for a little (or long…) while. I don’t hunger for it. I test it, as I would anything, but I don’t use it for recreational orgasms. The Rave, though, was an immediate hit.

Everything was going so well. Then I looked at the back of the box for confirmation of the one thing that concerned me. A cheery drawing indicated “Splashproof.”

My heart sank. All We-Vibe’s other toys are fully submersible. I felt cheated, like that time I tried to go to the nearest Panda Express only to find it shuttered.

But there was a bright spot among the other icons: one labeled “App-Compatible.”

That’s the story with the We-Vibe Rave: there are amazing things about it that easily make up for the things that aren’t so great. I can forgive and forget the toy’s depressing color, its confusing controls,1 and the lack of waterproof functionality, because the Rave’s shape is 1000% perfect, the vibration range rules, it can be controlled with an app, it’s only $119…

I fear listing off these features does not appropriately sway you, though, so let’s talk about what’s really important: what my G-spot thinks of this toy. My G-spot can’t speak English, but here’s a rough transcript of its thoughts when I use the Rave:

As I write this I’m staring at a freshly-squirted-upon Rave that literally dripped ejaculate onto the floor as I moved it from my vagina to a paper towel on my desk. That was my break from writing this review. It took all of a few minutes.

This is G-spot stimulation so good that I don’t fully understand why, and so effortless I almost feel like I don’t deserve it. This is G-spot stimulation produced by a head neither bulbous nor severe, and therefore without the awkward popping sensation sometimes caused by those shapes gliding over the pubic bone. This is internal vibration that enhances the pleasure rather than muddying it.

In testing the Rave, I’m reminded that the handle of a sex toy can be just as instrumental as the insertable portion. The Rave’s handle curves up, toward me, making manipulation of the toy incredibly easy. Slight movements such as light thrusting or rocking take minimal effort and reap great G-spotty reward. Plus, the rounded tip and stubby stature of the shaft allow me to thrust wildly without poking my cervix — an issue many have with toys like the Mona 2.

There’s something magical about the Rave’s wonky, asymmetrical shaft. That shape, and the wide range of steady vibration intensities, make me positively giddy about what this toy might be able to do for folks starting to explore their G-spots. My partner, who normally doesn’t care for internal vibration, had his first ever G-spot only orgasm with the Rave: “all I could think was THIS IS AMAZE. MIND BLOWNZ.” 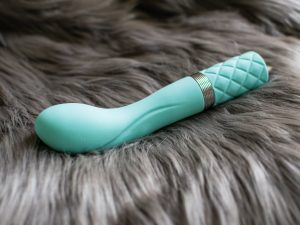 But I still start with it clitorally every time, which tells you something about the motor in this toy. We-Vibe is known for their robust motors in toys such as the Touch and Tango, and they don’t disappoint here. The 10 steady intensities are incremental and satisfying, similar Mona 2,2 and the 10 patterns aren’t bad either. I’ll admit the shape isn’t as pinpoint as I’d like — I sometimes flip it sideways so I can rest the edge ridge against my clit instead — but the vibrations are A+, and I can’t complain much considering what that very same shape does to my G-spot.

The charging port is right under the controls, so vag gunk inevitably circles around it, staring at me like a judgmental eyeball as if to say “you took things too far. You squirted too much. Don’t get your nefarious liquids near me.” As far as the “splashproof” label goes, I once accidentally chucked the Rave into a sink full of water with a bunch of other waterproof toys, and it survived. I also routinely clean it under running water because I’m lazy.

According to We-Vibe, the charging port has a “septum valve” which protects the internal electronics from water ingress. This means I have to stab it heartily with the charging pin, which is never not terrifying, but it also means that unless you’re dunking the toy underwater or ambushing it with a Super Soaker, you’re probably fine.

Words I did not think I’d be using to describe a single sex toy app: attractive, responsive, intuitive. You can swipe through a bunch of color-coded vibration modes (helpful for instructing your partner, “the yellow one, not the purple one FOR THE LOVE OF GOD NOT THE PURPLE ONE”), create vibration playlists, and draw unique vibration patterns. The app has options for text, video, and audio chat, all of which integrate nicely with the toy controls. Consent is baked in; it doesn’t allow screenshots, and at any point you can cease everything by tapping “take control” at the bottom.

Kynan: “connect lover.”
Epiphora: it’s silly. but at least not gendered.
Epiphora: “partner” would’ve been fine though guys
Kynan: that’s not sexy enough
Epiphora: lol you are going through all the modes immediately i love it
Epiphora: try not to go above like 7 or 8 right now those settings are very high
Kynan : oops haha
Epiphora: it stopped vibrating, did the boris pic i sent in the app’s chat overload it?
Kynan: no, i was trying to draw a vibe pattern
Kynan: can i not make your vibe do my saved one?
Epiphora: ohh, that feature is not available for single-motor toys yet3
Kynan: lame, i wanted you to experience “ghhyugsd”
Epiphora: with a name like that how can i not
Kynan: it’s like the sound of someone trying to sneeze quietly
Kynan: it’s probably going to be the best you’ve ever felt
Epiphora: it’s too good to be experienced. too perfect for this world

The We-Vibe app got rave (sorry) reviews. All participants used the word “fun” to describe it. Royce said “this app is cool as fuck; it’s like playing on a keyboard.” Ky and I were onto something: the vibration playlist creator and draw-a-vibe mode, which now work with Rave, are thought-out and enjoyable. There’s room for improvement, of course, but it works and provides both users with an experience that at least isn’t boring. I asked my other partner if he found it arousing. He said “oh, well if I wasn’t in a van surrounded by people.”

I’m the best girlfriend ever.

One of the Rave’s most obvious competitors is the OhMiBod blueMotion NEX 2, which is also insertable and app-compatible (and modeled after the excellent Lovelife Cuddle). I tested the OhMiBod app with a few people too and found it much less impressive than the We-Vibe app. The connectivity is abysmal, it overheated my feeble old phone (leading to the joke “your phone is sure phoning it in tonight”), and it makes you choose “male” or “female” upon sign up so it can use pronouns for you. This is to say nothing of the modes themselves, which lean much more gimmicky than functional, and give the remote user barely any feedback on what the receiver is experiencing.