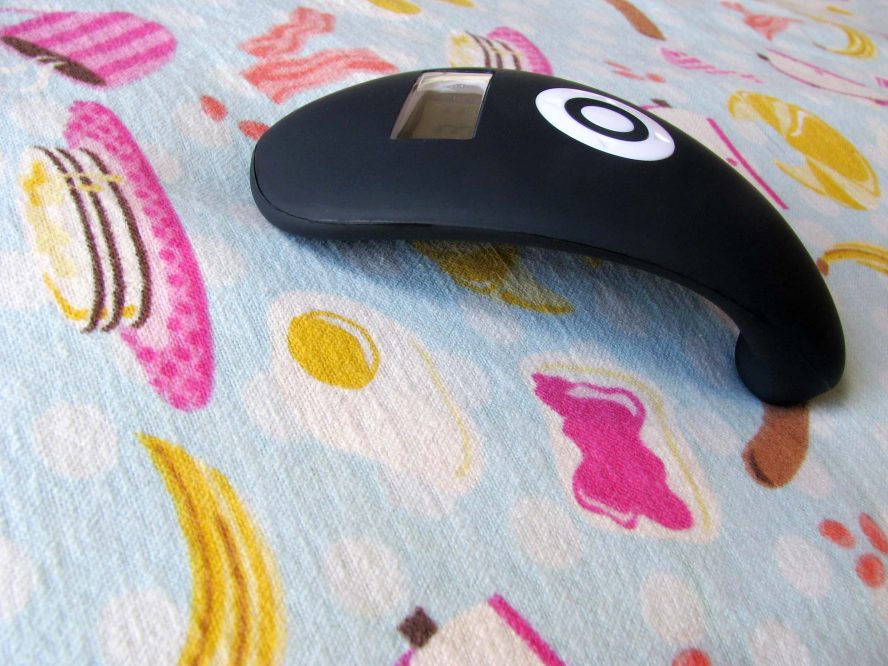 The premise alone led me to the Wake-Up Vibe. And the premise drove me away.

I only tried it a handful of times, months and months ago. Enough times to realize that I actually don’t like a bulbous machine accompanying me to bed, even if it promises to wake me up with vibrations. So for a long time, I tried to pretend this toy wasn’t on my “to review” list.

I was perfectly successful at that until yesterday, when Lovehoney informed me that this toy is being discontinued on their site. So I dug it out of storage and plugged it in. The screen started spitting gibberish at me — blips and bloops where numbers should form. And that’s all it would do. Even after charging. The Wake-Up Vibe is dead, yo.

The Wake-Up Vibe is coated in silky silicone, but has no give to it. It’s big — the length of my hand, 2.75″ wide at the base. It comes with a flimsy satin eye mask, storage pouch, and adapters for charging it all over the world. The manual is printed in bullshit pastel colors in a tiny font. It’s almost impossible to read by the light of a bedside lamp, which is where you’d be most likely to read it.

Unfortunately for my feeble brain, the Wake-Up Vibe runs on 24 hour time. This, coupled with all the steps required to actually set the alarm, convinced me never to use the Wake-Up Vibe for when I need to get out of bed and not be fired from my job. I just don’t trust it enough. And so it was delegated to days off (during which sleeping in is kinda the point…) and naps (which also don’t tend to have set end times because I’M NOT IN COLLEGE ANYMORE WOOOO).

Since I expected the worst — say, a sharp jabbing pain every time I turned over — I was pleasantly surprised when that didn’t happen. However, every moment I was awake, I was aware that it was there. Hulking. Unyielding. Waiting. Waiting to strike.

I woke up at 11:30 or so and realized the vibe hadn’t gone off. Just as I was grumbling to myself, formulating the Negative Nancy review in my head, I drifted back to sleep. Then, around 10:30, I woke up and realized that I had been dreaming before. I actually dreamed that the vibe didn’t go off. Jesus christ, I am way too invested.

There’s a manual mode too, but why would you?

I feel the need to humbly ask that you please think about the implications of a vibe that you have to wear to bed. Yes, waking up to vibrations sounds awesome, but rolling around with a gigantic device in your underwear for hours is not. Nor is spending $90 on a toy with a battery so weak that it craps out if not kept charged at all times.

I realized quickly that I’d made a horrible mistake in asking to review the Wake-Up Vibe. Example: I’m a napping FIEND. My favorite naps are after gorging on Panda Express. But this toy drove me to avoid naps.

This is important because there’s another alarm clock vibe out there called the Little Rooster and you should not get it either. Mostly because of what I just said, but also because the people who invented it had the audacity to suggest that you fashion your own Little Rooster out of Kit Kats and shove that down your pants. I wish I was kidding:

The face you are unquestionably making as you watch that is the exact face I make when I think about alarm clock vibrators now.