Flipping open the book, I’m immediately transported back to college. The pages are thin, the line spacing tight, the font reminiscent of many other overpriced essay collections I had to read for school. I like it and also dislike it!

Similarly, Candida Royalle’s essay is benign enough, until out of the blue she starts slamming female pornographers:

Speaking of wet blankets, there is surprisingly little discussion in this book of anti-porn activists such as Gail Dines, Andrea Dworkin, Catharine MacKinnon, Robert Jensen, and Shelley Lubben. I was hoping for some badass take-downs, but found only one — Clarissa Smith and Feona Attwood’s essay on anti-porn rhetoric. The whole essay is a burn, basically, which is to say I loved it. 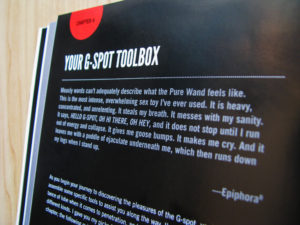 I like reading too much into things as much as the next guy (I once wrote a 10-page paper arguing that the goblins in “Goblin Market” fit the anger-retaliatory rapist subtype), but I was perplexed by the conclusion that Keni’s race is somehow a factor in why he doesn’t get a ton of screen time in Rough Sex 3. I re-watched the scene and yeah, as I mentioned, Keni’s role is brief, but I doubt it has to do with the fact that he’s Asian. I always assumed he just came too fast.

P.S. That scene is still so freaking hot.

I also loved Keiko Lane’s “Imag(in)ing the Possibilities: The Psychotherapeutic Potential of Queer Pornography,” which sounded like it was going to make me yawn. Instead it punched me in the gut, as when she wrote about gay men who lived through the AIDS epidemic:

And Tristan Taormino’s essay is, of course, great, even if much of the information in it has been culled from her “My Life as a Feminist Pornographer” talk. She is the most explicit about the nitty-gritty details that comprise ethical porn-making: consent, communication, fair pay, safety, diversity without commodification, freedom for performers to participate in their own representation, and all the snacks, sex toys, and safer sex supplies on set that a performer could ever need.

In a perfect world, I would’ve loved to read additional essays by Belladonna, Sasha Grey, Violet Blue, Joanna Angel, Adrianna Nicole, and Mickey Mod. Perhaps they were contacted and declined; I don’t know. It is also odd that Shine Louise Houston didn’t write something, despite being practically the most name-dropped person in the book.

Also, it goes really well with a good cat friend and a mug of cocoa.