Review: The Secrets of Great G-Spot Orgasms and Female Ejaculation

Tristan Taormino’s guide to G-spotting is inclusive, thorough, and never uses the word “chakra” once.

It’s not like I needed to read The Secrets of Great G-Spot Orgasms and Female Ejaculation. I discovered my G-spot three years ago, and squirted soon after. I’ve been having squirtfests ever since, and my G-spot is an integral part of my sex life. But the G-spot is a very misunderstood creature, and I’m thrilled that Tristan Taormino tackled it.

When I first flipped through this book, I happened to land on the intro page for chapter four (“Your G-spot Toolbox”). I then proceeded to have a heart attack, because I AM QUOTED THERE. My dorky Pure Wand post is quoted! I can barely believe it, but you guys — I’m officially a celeb.

Anyway, rewind. The book opens with a brief story about how, at a workshop, Tristan helped a G-spot non-believer find her G-spot and have the first G-spot orgasm of her life. In summation: “I’m a boss.” But also: “everyone with a vagina has a G-spot,” which is important for people to realize right off the bat.

This book is neither solo-centric nor partner-centric, which is great. It’s also quick to point out that fingers might not be enough for the G-spot, and unabashedly recommends many toys that could serve the purpose better (hallelu!). The Pure Wand is name-dropped several times — at least three, that I counted — and there’s a lot of great lube info. Kegels are given their due time, and the epic Luna Beads are mentioned. However, it is a puzzling travesty that the Liberator Throe is never brought up; instead, Tristan recommends bed pads for catching ejaculate. What?

Maybe it’s because I know a lot of this info, but I felt like stuff was repeated a lot. There were a lot of numbered lists. A lot of mentions of relaxing and letting go (which are important, it’s true!), the “come hither” motion, etc. And a shit ton of position ideas described at length. So it got boring. 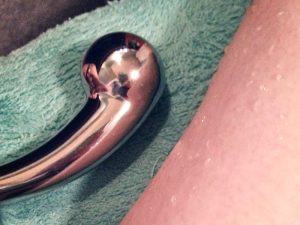 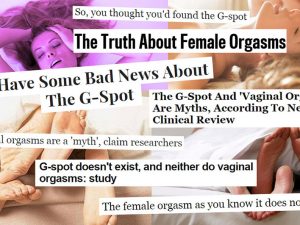 There were only a few a-ha moments for my sex-saturated brain. Mostly they involved information that I just never fully realized, like that firm pressure (rather than wimpy strokes) is important on the G-spot because you’re stimulating the sponge on the other side of the vaginal wall. And that stimulating the sponge also stimulates the urethra, which sends a signal to the brain that you have to pee. Signal to the brain! Yes! Everyone relax! You’re not actually gonna pee; it’s just your brain pulling your leg. Err…

And this quote is perhaps the most important of all:

There is compelling evidence that the fluid is not urine. Several studies have shown that female ejaculatory fluid contains prostatic specific antigen (PSA) markers that are similar to PSA markers in prostatic fluid and semen produced by the prostate in men; these same markers are not found in urine . . . Five different studies show the majority of women’s ejaculate contains zero or low levels of urea and creatinine, both of which are found in urine.

I haven’t read any of the books that might be considered this book’s competitors: Deborah Sundahl’s Female Ejaculation & The G-Spot, Violet Blue’s The Smart Girl’s Guide to the G-Spot, and Somraj Pokras and Jeffre Talltrees’s Female Ejaculation: Unleash the Ultimate G-Spot Orgasm. From what I’ve read, Sundahl’s book is more spiritual (it calls squirting a “feminine fountain”…), Blue’s is more like talking to a snarky girlfriend, and I don’t know much about the other one, but it begins by explaining that only those in tune with their “sexual energy” will be able to have “explosive, gushing orgasms.” So there’s that.

The Secrets of Great G-Spot Orgasms and Female Ejaculation is straightforward, thorough, inclusive, and never uses the word “chakra” once. It demystifies the G-spot and dismantles pervasive myths, and it gives sex toys the spotlight they deserve. It may not be the most amusing book around, but it gets the job done.

Grab this book on Amazon.
And get a Pure Wand while you’re at it — you’ll need one.