On just the right setting while holding your breath, the Ora 2 is like a pleasant massage chair. At its worst, it’s a frustrating nightmare.

I wish the entirety of this review could just be the word no. Not even repeated for emphasis, not even in all caps. Just a single, lonely, plaintive no.

I am bored by how predictably mediocre the LELO Ora 2 is. When the press release called the Ora “the world’s most sophisticated oral sex simulator,” I didn’t fly into a rage — I just sighed.

Granted, Je Joue is acting like their SaSi — the actual first oral sex toy — never happened. Like they 86’d it and buried it ten miles out of town. Which works for me, because the SaSi sucked. But that doesn’t mean LELO gets to swoop in and snatch the credit.

Also, when you have to push the second generation of a toy within a year of its initial release, maybe re-think your testing process? Everyone on earth could have told you that the rolly ball on the original Ora didn’t protrude enough. I suffered through that toy, and I can confirm: it was like a ladybug crawling gingerly across my clit. It was like oral sex for someone who just arrived on this planet. At any given moment using it, I could not tell you where the rolly ball was. My orgasms were tortured; one time afterward, I instant messaged a friend: “I’m offended by the lack of pleasure I just experienced. It barely qualifies as an orgasm.”

In the draft of my review I wrote, among other burns,

Someone come take it from me, take it away, take it far far away. I don’t want to look at it, remember it, or experience it anymore. It has been a waste of my clit’s time and I want to block it from my memory.

The Ora 2 is an improvement because I can feel the rolly ball now. I can feel the thing that was promised to us initially. This is no real cause for celebration. The original Ora was worse than the Je Joue SaSi (which was released in 2008), and the Ora 2 is about on par with it — better in some ways, worse in others. There are no huge leaps and bounds being made here.

The Ora 2 has ten settings. Several are ball movement only (either a complete circle or a portion of one), and several are a mixture of movement and pulsation, which leaves only a couple that aren’t completely useless to me. Like, I am offended by the insinuation that a person with a vulva could come on some of these settings. The ball movement, even on the second generation version, is way too gentle. Any orgasm derived from this toy can be attributed almost entirely to the vibration — not the ball.

So, I’m only willing to chase an orgasm on one setting of this toy — full circle with steady vibration. The chances of my orgasm being ruined are high enough without suffering through one of the other modes.

I would be remiss not to admit that I’ve had a few good times with the Ora 2. On The Only Worthwhile Setting, turned up to “turbo” so the rolly ball’s circle is sort of fast, with the toy positioned just right and no attempts at thrusting anything in my vag, it feels good. The rolly ball maneuvers over my clit in a subtle but pleasurable fashion. With the vibration egging me on, I can come pretty easily. 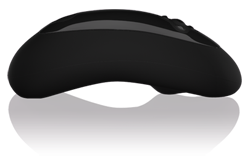 But for $189? Nope. $189 should buy you refinement, and the Ora 2 is not refined. Sure, it’s rechargeable, waterproof, and made with quality silicone, but it’s such an awkward toy to use. Aside from its bumbling size, the buttons face away from me and the charging port is right by the part that I jam up into my vulva. Because that makes sense.

Can we also talk, again, about the Insignia line as a whole? About this silver plastic shit with a crevasse that is just perfect for vag juices? About how I gave up on ever Photoshopping every bit of my vag gunk out of these photos? LELO still uses this “design” for some of their toys! I don’t know why! I’m not so much concerned about seeing residue on my own toys, because I don’t give a fuck, but it becomes a problem when I pull this toy out to  mock in front of my friends and there’s dried gunk in the crevasse and it makes me look like a goddamn amateur.

LELO’s painful fauxnnovations and upsetting choices in recent years are really starting to worry me. Like Lana Del Rey’s latest album, the company seems to have become too moody and self-aware to be good. They know they can make bombastic claims and their reputation for quality will carry sales — whether those toys ultimately deliver or not. Hey, LELO, stop resting on pretty.

And if you want oral sex, go find yourself an actual human tongue. No, not a severed one… one attached to a human who can actually respond to your needs and wants, apply pressure where it feels good, create unique movements, and oh yeah — suck. Can we all collectively agree that no sex toy is ever going to be able to do all of that?

The only thing Ora 2 has over a real person is that it vibrates, it doesn’t have a mustache, and you can berate it in disgust without offending it.

Get the LELO Ora 2 at LELO, SheVibe, or Pleasure Chest.