Look... it feels like a kitchen tool trying to make meringue out of my clit. 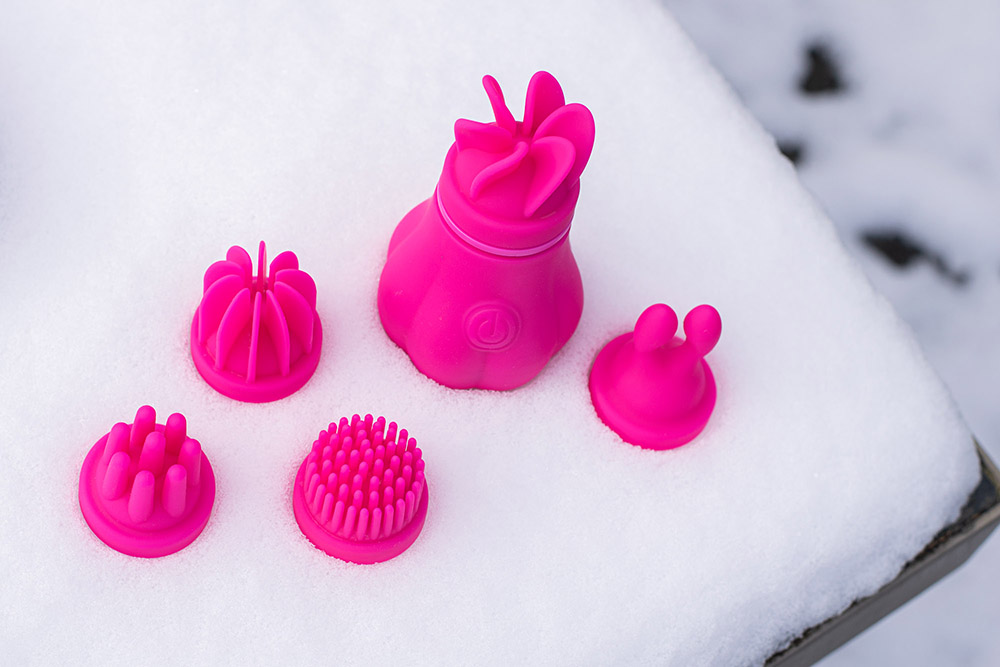 It’s a genius name for a sex toy, because it conveys so much. Caress, like the breeze casually ruffling a line of laundry. Like the back of your lover’s hand against your cheek. Gentle, romantic, safe. What you’d do to a kitten. There’s care in it. Tenderness. Caress, a verb that does no harm.

The Adrien Lastic Caress has not taken care of me. In fact it has slapped me around a little, pestering my genitals with its mechanical rotating tip and prickly attachments that get tangled in my pubes. When I think of verbs for its stimulation, I think of words like manipulate. Wheedle. Yank. When I think of exclamations to describe it, I think of “ow!” Stick that in your mad lib.

The packaging purports this to be “revolutionary” stimulation, and I guess that’s a way language could be used. I’ve had sex toys that tried to lick me before, and a weird one that rolled a tiny bump over my clit, but nothing quite like the Caress’s spinning movement and back-and-forth shuffle. I was drawn to the idea, like a freak.

The Caress has 10 rotation modes and five interchangeable silicone attachments. Do you realize that’s fifty combinations for little old me to test!? My notes for this review (in a Google Doc simply titled “jack-off notes”) are verbose, overwhelming, a symptom of my neurotic brain trying to make sense of chaos. As if collecting enough data will reveal one magical combination of attachment and rotation mode that doesn’t grab my pubes…

Apparently it also vibrates, which is a fucking laugh and a half. Any added vibration is negligible and imperceptible, too buzzy and light. The movement is doing all the work when it comes to stimulating my clit, and all I hear is a mechanical whirr, like a tiny pissed off kids’ toy.

And it’s pink. Only pink. Pink like a disingenuous International Women’s Day ad, or a flower blooming in my least favorite color.

The settings on the Caress are as follows. Modes 1-3 shuffle back-and-forth with increasingly wider movements, never rotating more than half an inch. Modes 4-7 rotate one direction for longer, then make a pit stop to reverse. Modes 8-10 rotate one direction only, with accelerating speed.

Look… it feels like a kitchen tool trying to make meringue out of my clit.

Also, lube. Lots of it. Slather it on or face the consequences. Then regret it whenever you go to swap out the attachment.

The Caress gets me off, but there’s always something a tad dangerous about it. My vulva feels booby-trapped — one wrong adjustment away from pube-pulling. I ride out my orgasms while mashing the toy into my clit, where pressure dulls the sensation. What else can I do? The flickering that brings me to the peak isn’t always the sensation I like mid-orgasm, but I have no choice.

Then one day, while taking a shower and thinking about this review, I started anticipating the comments. Low voices rang in my head, bellowing: did you even try shaving, you disgusting hippie? So I grabbed my shower scissors and gave myself a trim. Nothing drastic, just snipping the ends of the curly-Qs, tidying up the grown-out bits. I definitely wasn’t willing to go full-on naked mole rat or anything. This was already silly enough. A sex toy should not require a pubic haircut of its user.

But, annoyingly, it did help. The pube-grabbing was less frequent, and when it did happen it was less intense. Suddenly able to relax enough to appreciate the sensation for what it was, I liked the Caress better. Not in the way that I’m ever going to use it after I publish this review, but enough to understand why some people might be into it. Orgasms kept creeping up on me, although my clit was sore afterward. 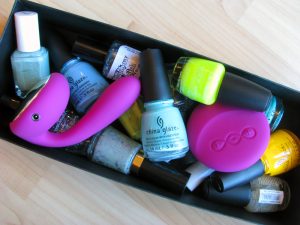 On certain settings, the swirly and flat flap attachments want to push themselves off me, so I can’t keep them in contact with my clit. It feels — and sounds — like a wind-up car rolling back and forth over my vulva. Not good. Disconcerting.

Then there’s the HAIRBRUSH. You know which one: the attachment that resembles the bristles of a My Little Pony hairbrush. It’s abrasive, skidding across my clit abruptly. No amount of lube is enough to take the edge off. During the one-way settings, it wants to take my pubes on a 360-degree ride. In other words, keep this attachment away from your mane.

The Caress seems like the right kind of toy for a brand like Adrien Lastic, and that’s not a compliment. Their catalog often provokes questions such as “WHY,” “HOW,” and “for what earthly reason?” But I did try some of their more average-looking vibrators, the Nyx and Symphony. Nyx has a decent shape but vibrations so paltry they’d barely disturb a sleeping guinea pig. Symphony’s motor isn’t bad, but its neck is far too flexible and I see no reason to choose it over more powerful options.

I don’t want you to spend $99 on the Caress. Will you be annoyed if I recommend getting the Volta and just… moving the toy manually if you want? Vibration has been the gold standard of clitoral sex toys since forever, probably because it works. I’m always going to favor an effective sex toy over a flashy one that gets a lot of clicks on Instagram. I’m older than Instagram, so I get to say that.

Something about the Caress feels rudimentary, like a factory had a basic rotating mechanism so they just slapped it on a base and called it good. That’s not enough for me. Until I see a toy like the Caress with separately-controlled, rumbly vibrations to compliment the movements, and at least one attachment that plays nicely with pubic hair, I remain unimpressed. At the end of the day, when the buzzing ceases and the lube dries, I think we can do better.

Get the Caress at SheVibe. Or maybe the similar but cheaper Satisfyer Sweet Treat.