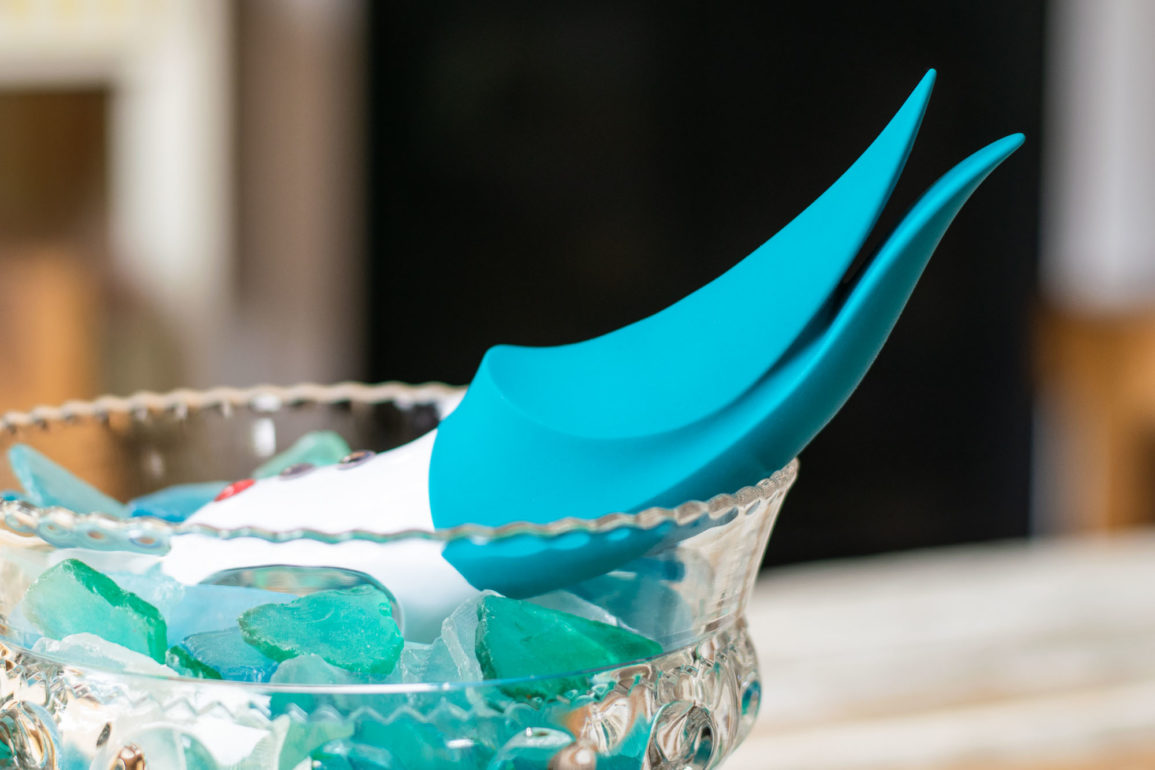 I first saw the Fun Factory Volta in a brief, fleeting Instagram video my friend sent me to ridicule. “It looks like a vibrating duck beak,” they said. “It scares me.” I showed the link to my girlfriend, who promptly typed back, “why does everyone want to slap the clit!”

But I was not scared. I WAS THRILLED. Later, when Fun Factory sent me the press materials, I didn’t read them. I just glanced at the flapping tips and said yes. I craved those tips against my clit, flickering or poking or fluttering or tapping — indeed, I needed to learn which verb would be the most apt, and that was part of the fun.

Vibrators that intend to achieve a flickering sensation usually just… don’t. The Volta does flicker, though: its range of motion is about one centimeter, with the tips visibly reverberating back and forth. As a long-time fan of pinpoint clitoral toys, this is perfect for me. But if you dislike that kinda thing, no problem — adding pressure mutes the movement and spreads out the vibration.

Of course, the Volta’s motor deserves at least 50% of the credit, or possibly more like 70%. The shape would be worthless if not backed by Fun Factory’s deeply rumbly G5 motor. There are 6 vibration intensities, from a low purr to a powerful thrumming, and the firm clicky buttons are easy to master. It comes in teal, pink, and an amazing eye-searing orangeish red.

The effortless pleasure I get from the vibration means I can focus on exploring all the ways the Volta can be positioned. I can push the tips together on the dominant left side of my clit, one of my favorite techniques. I can flatten one tip against my labia while the other flicks at my clit, or vice versa. I can cover my vulva with the wider, tongue-like body of the toy, sending resonating vibrations through my labia while simultaneously targeting my clit.

Then there’s the penis. Remember that Jimmyjane vibrator about which I wrote, “I guess you’re supposed to slap your penis down between the flaps like you’re serving up a hot dog”? The Volta’s like that, only not shitty. Its flexible tips hug the penis nicely; add some lube and you can glide the toy up and down. My partner, who must feel like a murder suspect after all my extensive interrogation, can only offer the simple fact that it feels interesting and good, and that the low-pitched motor contributes to his enjoyment. But that’s saying something from a guy that mostly masturbates with his hand.

I have a hunch the Volta could work for a variety of genital configurations, and evidence is mounting to support this hypothesis. A trans guy and sex shop worker, Sam, told me he loves the Volta — and so do cis dude customers:

It’s my new favorite. Definitely a one-size-fits-all sleeve. It can be a little intense for someone with more growth, but used on a lower setting or one of the gradual patterns and paired with some lube, it makes a great stroker. The flicking action when used with just the tips of the vibe feels a little sharp to me, but when placed on either side of the clit, deeper into the “V” of the toy, the rumbling power makes it a perfect low-effort toy.

Everyone I’ve sold it to raves about it, including the few cis men who have bought it as an alternative to a stroker; one customer with erectile dysfunction who couldn’t use a stroker but still wanted something to stimulate, the other who just wanted something different. I think it’s one of the best multi-use toys out there right now.

Yup yup yup. I may have gotten quite stoned one time before using the Volta, and I found myself laying there mesmerized, reading fan fiction and marveling at just how many sensations this vibrator can produce. I loved the Volta long before I grabbed my bong — I actually have a personal rule not to test toys while high because it will inevitably skew the results — but the experience illuminated what I already knew: that even subtle adjustments change the stimulation, and all of it feels wonderful. It’s the difference between letting the tips brush the clit or applying pressure; angling the toy vertically or more perpendicular to the body; grouping the tips or splaying them out.

In the Volta, finally, the awesome power of the G5 motor is leveraged, transmitted, and funneled into an unapologetically external toy.

I mean, you can insert the Volta if you want. Then, like me, you can struggle to describe how it feels… um, like something of inconsequential girth and indeterminable shape is creating a concentrated flickering near my G-spot? Not sure, but I can tell you it’s not thick enough for my vag to care.

But I’d be hard pressed to conjure any further complaints. Like, the best I could say is “the tips could be a little more rounded.” Or I could warn you that if you don’t press the toy against your body, it creates a tiny breeze and flicks lube at you. Yet even that is more adorable than annoying.