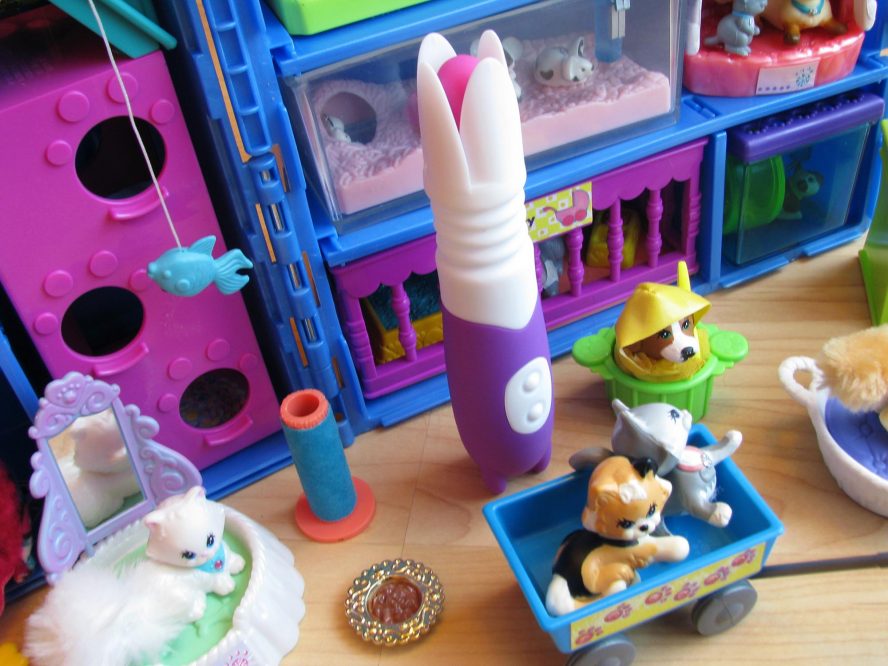 The Vibratex Tulip is really bizarre. It looks like a rocket ship puking a flower, like some combination of a character from David Lanham’s work and a beast from the Oddworld games. Figuring it would fit right in, I decided to photograph it among my old Littlest Pet Shop toys.

Welp, I hope you will still love me, Sarah, but I do not completely agree. I can see why one might say that about this toy, as it is very uniquely shaped, but I find its price tag and flexible neck deal-breaking. (Ersh, those two words should not be so close in the same sentence.)

The Tulip comes in a clear plastic box with no instructions, no storage bag, and no batteries (it takes two AAAs). The packaging continually mentions that the petals are “custom designed,” which, uh? And apparently Vibratex’s slogan is “Arching Your Back Since 1983,” which I find hilarious. It’s like a “your mom” joke waiting to happen.

The Tulip has a dedicated on/off button and a button that cycles through the vibration settings: three steady speeds followed by three patterns (a pulse, a short-short-long pulse, and throbbing escalation — not bad).

The petals are thin and fairly rounded, but that won’t stop them from poking. They don’t flutter, as you might hope. My clit’s a bit of a weirdo and likes the poking sensation, but it’s not for everyone. Even for me, there’s a thin line between fun poking and abrasive pinching, just as there is between pleasant internal scraping and the feeling of something scooping out my insides like a pumpkin.

The key with this one is angle. I find that the more it can be held parallel to the floor, the better. I aim to touch my clit straight-on, so the petals surround it and the nub presses into it. That’s the best way to achieve the most interesting stimulation, and also to avoid the dreaded neck issue. Half the time.

The Tulip’s neck is hollow. Completely, creepily hollow. I can strangle it. Any mispositioning can cause the neck to bend at a 90-degree angle. So I’ll have an orgasm and then look down and realize the neck is completely bent against my vulva. And I feel like that shouldn’t happen with vibrators? Maybe?

When it’s good, it’s good. The three vibration strengths are decent; the sensation is unique and pleasurable. Admittedly, I do like a sex toy that stands up on its own. It even dances across the desk when I turn it on. It’d be perfect for a sex toy puppet show.

But $39 is too steep a price for a battery-operated toy like this. If you can get it for $25 and your clit is also a weirdo, I say go for it. But not if you use a lot of pressure with your clitoral toys. This little freak requires a light touch, lest you be catapulted into bent-neck hell.