Can my vagina taste ice cream? Does my butt enjoy carrots? These questions, and more, answered. 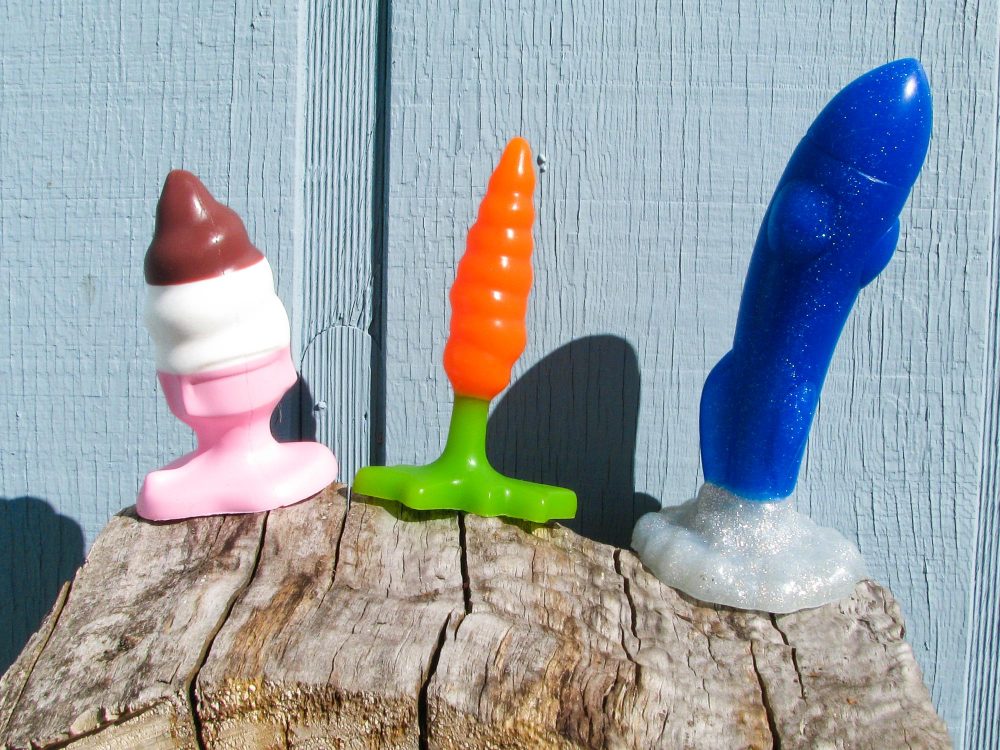 The owner of Hole Punch Toys, Colin, was emailing to ask that I review something of theirs. “You will absolutely tear it apart, I am sure,” he wrote. “However, I think it would be excellent fodder for your wit.”

I based my supposition that you would not like them on a review of B.S toy, which you (not unreasonably) found fault in the finish and enjoyability of the form.

As you can see, my toys are not designed with physical functionality as a top priority. The pleasure my pieces are designed to induce is a cerebral one. I very much believe that sex can be play. One of the great pleasures of adulthood, for me at least, are the times when I am with a partner with whom getting naked and fooling around has an almost childlike sense of fun and discovery. It is a giggly, lightheaded feeling. My toys are meant to be a physical representation of this.

Also, [my toys] are not polished. While not ragged, they are not “perfect”. There are seams. There are blemishes. I make no apologies for this. It’s just the way it is.

This explanation made accepting the challenge even easier. How would these toys, not particularly designed for sexual pleasure, fare when used that way? What would I say in a review, given — for the first time — active encouragement to find fault in the products? How would I wield such unprecedented power?!

I asked for the Ass Cram Cone, Plugs Bunny, and Crotch Rocket. Colin alerted me that I had chosen all toys made with the stiffer silicone (40 shore hardness) and suggested they pour the Ass Cram Cone in a softer stock if I was planning to use it vaginally. Smart. I was. I agreed.

The toys came to me in cardboard tubes with cute home-printed labels. I took them out, lubed them up, and put them in my orifices (not all at once, pervs), ready and willing to do my worst.

For years, I have wanted a sex toy shaped like an ice cream cone. Not simply a toy with a swirly shape, but something 100% committed to being a full-fledged ice cream cone. One existed before my time — manufactured by the supremely imaginative but long-defunct Dills for Does — but since then, nothing satisfactory.

The Ass Cram Cone is more adorable than my wildest dreams, and let’s be honest, that probably sways my opinion a bit. It reminds me of eating neapolitan ice cream straight out of the box, boring a tunnel through the vanilla and strawberry stripes and not giving any fucks how my path of destruction might impact the next ice cream consumer. Ah, memories.

My ass is not ready to be crammed with an object of this size yet, so I only used the Ass Cram Cone vaginally (Vag Cram Cone?). Thanks to the softer shore of silicone, it has a delightful squish to it that likely meant the difference between apathy and serious enjoyment. The cushy silicone dulls what might otherwise feel too harsh: the array of drips decorating the sides of the cone.

At 2″ in diameter, the Ass Cram Cone provides a good, secure, full sensation, with a hint of G-spot stimulation simply from being huge. But the drips are what seal the deal. Resting just inside my vagina, I clench and revel in their contours. Drips and I, we get along. This is front wall stimulation done well.

Thrusting is not a thing with the Ass Cram Cone. It locks into my vagina and I only have to nudge it a little to appreciate its… flavors (sorry). It’s also excellent when I hold my Hitachi against the base and make it vibrate wildly.

The base could be less obtrusive, yes; especially anally, it’s likely to annoy butt cheeks. But without a big base, this toy wouldn’t stand up proudly. And it needs to stand up proudly, for photo ops at old-fashioned ice cream parlors and baseball games.

Stimulating drips + fullness + soft silicone + the best color combo ever make the Ass Cram Cone easily my favorite toy of the three. Even if my vagina can’t taste anything yet, the drips bring such a unique, refreshing dimension to the experience. I like you, Ass Cram Cone. You are my melty friend.

This plug looks so fucking innocent, but oh jeez. I can put things in my vag all day long, but bring me a long, pointy butt plug and I fall to my knees in defeat.

The Plugs Bunny is only 1.2″ in diameter, but its tapered tip and 4″ of insertable length just kill me. It’s too bad, because the gentle waves of the carrot feel nice going in… but it becomes a pokefest once fully inserted.

The base doesn’t bother me — although admittedly the sharp edges of leaves don’t exactly lend themselves to resting comfortably between butt cheeks. I’m more concerned with the persistent ache from my ass being speared by a vegetable.

It’s not like I was expecting a revolution. Mostly I asked for the Plugs Bunny because when you’re given the opportunity to own a carrot-shaped butt plug, you take it. As a butt plug, though, I… can’t take it.

Verdict: buy this only if you feel a mighty need to own a realistically-pointy carrot-shaped butt plug. Otherwise, for your other vegetable sex toy needs, the Rad-ish Plug and Baby Carrot look more ergonomic, or you could look into the various wares of SelfDelve.

A behemoth of glittering, astronautical glory, the Crotch Rocket is easily the most visually stunning piece I tried from Hole Punch. Its shaft is speckled with teal glitter, and its base is, I’m pretty sure, the exact color of the smoke that billows up during spaceship takeoff: sparkly silver.

Not that the Crotch Rocket feels unamazing. The three bumps are well-placed, and they work for me and my vagina. The top bump especially — that shit rules. I wish this toy had a G-spotting head, but the top bump almost makes up for that.