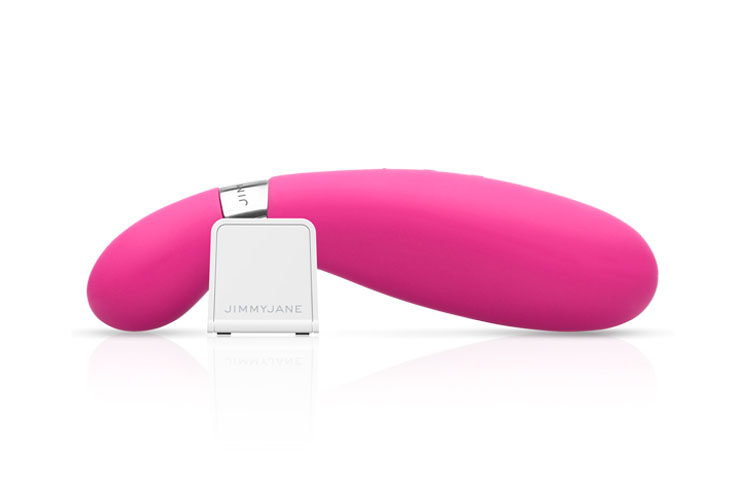 I’ve been dreading writing this review. I’ve been putting it off. I’ve been typing and deleting, trying to form sentences that adequately explain my feelings without sounding like a total grump.

But I’m going to sound like a grump no matter what, because I really don’t like the Jimmyjane Form 6. Sometimes, I come quite close to loathing it. A few people like this toy, and I objectively see why: it’s rechargeable, waterproof, has dual motors, is double-ended, and feels unique both externally and internally. That is all true, but for me, using the Form 6 puts me in a bad mood.

(The newer G3 version doesn’t have this, just a small charging base.) The Form 6 is fully charged after four hours. When the toy is removed from the charging dock, its lights blink to indicate how charged it is. Again, a great touch. The Form 6 also comes with a 3-year warranty.

The Form 6’s functions are like a reviewer’s nightmare, so I’m not going to break my brain trying to describe them. Basically, each end can vibrate independently, with five constant vibration levels. Then the whole thing has six vibration patterns that span the entire toy. I found an image that describes all the functions perfectly; for some reason, this information is missing from my manual.

All of this is controlled via three buttons located on the larger end. I call them buttons, but they’re more like barely-raised symbols that have to be FORCED DOWN rather than pushed. I am perturbed by how much effort it takes to press this toy’s buttons.

Since the Form 6 is dual-ended, the buttons are even more difficult to push when they’re IN MY VAGINA. Um, please explain this. This could’ve been solved (sort of) by adding a setting that cycles through the different vibration patterns, but there is nothing of the sort.

So choose wisely before inserting the Form 6’s large end into your orifice. You will be stuck with one vibration setting, unless you decide to pull the toy out, haphazardly stab one of the buttons, find a place to wipe the lube off your fingers, and insert the toy again. Oh joy.

Externally, the Form 6 is not quite strong enough for my tastes. The small end nestles between my labia nicely, but the vibrations are not surface level enough. The large end is just too broad. And whenever I have an orgasm from the Form 6 on my clit, it is weak. Coincidence? Maybe, but I don’t think so.

The dual motors and vibration patterns certainly feel interesting and unique. The problem is that they’re housed in such a stiff, unpleasurable body, with buttons that make me want to die. For $175, the Form 6 should blow my brains all over the carpet from the pleasure. But it doesn’t. It just doesn’t.