Jimmyjane has a habit of creating products with little to no understanding of human needs. These toys, consequently, are awful. 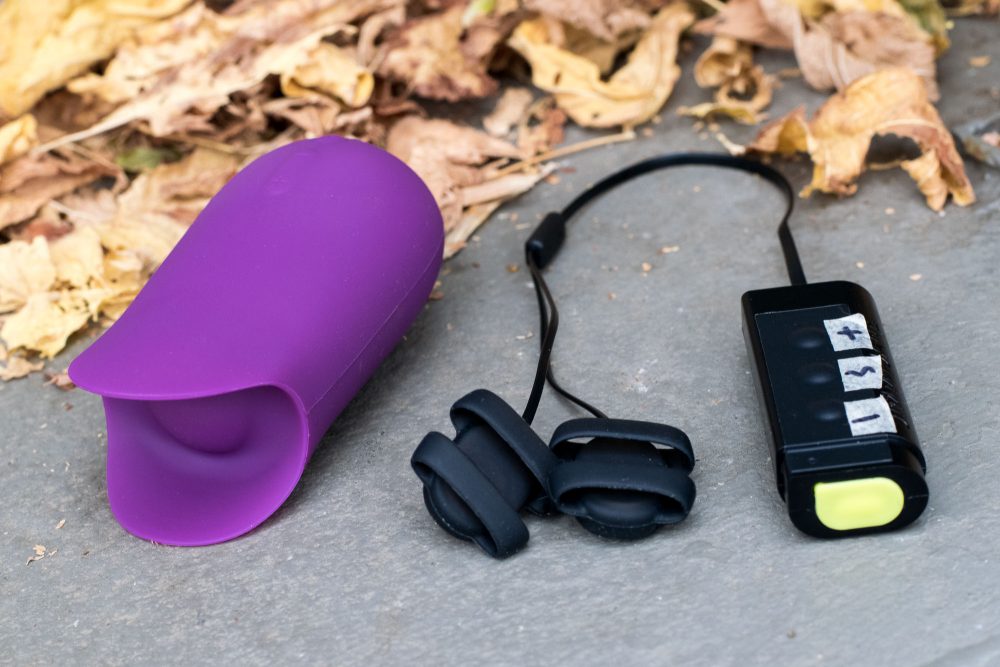 Why does Jimmyjane still exist?

That’s mean. I know. I should delete that. I should write a new first sentence, something less hopeless and definitive. But sitting down to tell you about Jimmyjane’s recent releases, that is the question that pops into my head. Why, year after year, do they create products with little to no understanding of human needs? Why do they fail to improve upon anything, to move forward in any meaningful way? Why do they insist upon peddling $4,000 bouncy sex castles and $35,000 private jet rides rather than getting people off?

I feel like in the venn diagram of “people who want fingertip vibrators” and “people who love estim,” there is very little overlap in the middle. But logic is not Jimmyjane’s forte.

Jimmyjane is like that aging, obstinate techie hipster in the room who for years has been standing around with a beer in his hand bragging about his grand idea for a Facebook-killing social media website but has never lifted a goddamn finger to make it happen.

When people pick up the Form 5 in the sex shop I work at and ask me what it’s for, I feel at a loss for words. I have no earthly idea what it’s for, and I don’t think Jimmyjane does either. Their tagline for the toy is “for him, for her, for us,” which I imagine being parroted by a gender-binary-loving shrug emoji. Get creative! It can do anything! For the only two genders that exist!

In reality, it can do nothing.

This toy looks like a mouth open in a silent scream of confusion, which is exactly how I feel every time I try to use it. How. Why. What. How do I position. I don’t. I don’t understand at all. At first it seems enticing, like the tips should waft pleasurably against my vulva. But they’re not floppy or flexible enough, so pressing them against my body only makes them jab me. Plus Jimmyjane’s terrible motor means they don’t move a lot — they just sadly buzz.

Using the Form 5 means constantly adjusting it, and never to much satisfaction. Sometimes, I shove both tips to the dominant left side of my clit, but usually I gravitate toward flattening the right tip against my clit, so the other tip just kind of pokes the crease between my vulva and my leg. It’s weird and feels like I’m trying to apply a sticker to my genitals. What is this, a slumber party turned circle jerk?

I can come with the Form 5, sure, but moooom do I have toooo?

In the “for him” part of the equation, I guess you’re supposed to slap your penis down between the flaps like you’re serving up a hot dog? I had my boyfriend try it. It was alright, he reported, but “pretty buzzy… the Hitachi is better.”

And still, still, Jimmyjane doesn’t include a storage bag with their $145 “high end” vibrators. Oh, but they do MANUFACTURE one. You just have to buy it separately. Also, for perhaps the first time, I actually counted the vibration patterns on a Jimmyjane toy and there are THREE? ARE YOU SHITTING ME? Way to cut corners everywhere, Jimmyjane. Oh my god.

I don’t even know where to begin with the Hello Touch X. First of all, I have to consult the manual every time I go to use this toy, especially in estim mode. And Jimmyjane didn’t deem it important to put symbols on the buttons themselves, instead assuming all customers will tuck the control pack in its totally dorky wrist strap. So… you’re going to look like a dweeb while using this toy. It’s just a fact.

But used with a partner? I hope you’re ready for your relationship to be tested. Literally the first thing my partner said after he started using it on me was “um, I can’t feel your clit. I feel like a teenage boy rubbing through your pants, like, ‘clitoris is between legs right???'”

It was awful. My partner’s manual stimulation skills, which are usually so on point, were severely hindered. His fingers were awkward and imprecise, with too much added girth to be able to surround my clit even if I told him where it was. We felt farther away from each other instead of closer — as if hipster Jimmyjane was standing in the corner going, “hey. ‘Sup. Enjoying my sweet invention?”

If, like me, you had lofty dreams of internal stimulation plus vibration against the G-spot, retire that fantasy. Inside a vagina, with barely any movement from my fingers, the pads threatened to slip off. “It’s like we’re being punished for using lube,” I narrated.

But it was inevitable. When I removed my fingers, the pads went bye bye. Queue simultaneous wincing. Queue me extracting the toy by tugging on its flimsy black cord. Queue fishing in my partner’s vagina.

To reiterate: IT WAS AWFUL.

But once we tossed the Hello Touch X away and touched each other with unaided fingers, we felt closer than ever before. Thanks, Jimmyjane!

As for the electrostim, I’m not a fan. It weirdly pulses, which makes me feel like I’m at a physical therapy appointment. My boyfriend described the sensation as “sharp” and made a face when I tried it on him. We both love the Neon Wand, but the Hello Touch X just feels obnoxiously tiny and prickly. Also the fact that there is no digital readout to tell you which setting you’re on is ridiculous and dangerous. I could be on setting 5, I could be on setting 10, I could not have the estim on at all — who knows!

It feels tolerable on my arms, so I (stupidly) thought I could handle it on my vulva. No. Even on a low setting, I cringed and yelped and jerked my hand away.

This is more than enough suffering for my art.

Jimmyjane, I wanted to review these toys because I still have a smidgen of hope for you. I desperately want people to buy your products and not regret it. I want improvements — deeper motors, user-friendly designs, pleasurable shapes. But they never seem to happen. You keep throwing wads of money into PR campaigns instead. You keep releasing toys that don’t actually feel good or work well. Discerning customers know the truth, and I know the truth: you haven’t produced a single amazing toy. Not one, in all your years.