This $400 vibrating “pleasure ride” is obscenely uncomfortable and looks like a toilet. I had to make all my friends experience it.

The Jimmyjane Rumble Seat in front of my sex toy closet.

When you arrive at the sex party and present the guests with your vibrating sex chair, you don’t exactly want the response to be “that looks like a toilet.” But that’s where I was. I was the guy bringing the sex machine to the party, and my sex machine immediately turned everyone off. One guest stated bluntly, “that’s not attractive enough to fuck, not at all.” “It looks like something a toddler would sit on,” another added. Nobody disputed it.

Clearly, we were all super aroused.

The subject in question was the Jimmyjane Rumble Seat, and it was getting quite the icy reception for a contraption that retails for FOUR HUNDRED FUCKING DOLLARS. But that was the beauty of the moment: none of those people knew the retail price. They judged the thing purely on its aesthetic appeal, and it was found to be not remotely inviting. Of course, Jimmyjane’s promo video claims the Rumble Seat has “a sleek and sexy design that compliments any interior,” but Jimmyjane’s video also features a headless woman lithely hovering around the Rumble Seat, barely touching it. Everything’s a fantasy.

In the real world, bodies have weight to them. Knees get sore; positions are challenging to get into and out of; stability is fleeting. In the real world, you can’t station the Rumble Seat in your living room and expect people to accept it as weird artsy furniture, as much as I’d love to fulfill my lifelong dream of imploring guests “please, have a seat” à la Chris Hansen.

To give you an idea of the sort of quality we’re looking at here, the Rumble Seat comes in a thin box with no padding, just a foam bag over it, along with power adapters, a manual (which announces boldly, SADDLE UP FOR THE RIDE OF YOUR LIFE), and two laughably tiny bottles of toy cleaner and sketchy1 lube. What am I, a peasant? An ounce of lube is but a drop in my ocean.

In keeping with that incredibly upscale feel, the Rumble Seat is made of this sort of gritty hard plastic, like the kind you might find on a kids’ outdoor picnic table. Emphasis on hard; there’s no give to this thing at all, and barely any squish to the grey silicone bump where the vibration is concentrated. It’s like an oversized bike seat with zero cushioning or adjustability.

But what did I really expect from what is essentially the same product as Pipedream’s garish purple International Rockin’ Chair? This is the way of things now that Pipedream owns Jimmyjane: we just get slightly “classier” versions of the original shitty toys. Call it a sex saddle, pleasure ride, rockin’ chair, whatever — it’s all the same overpriced hunk of vibrating plastic.

Oh, and it’s really fucking loud. Even on low, the booming noise emanates throughout my two-level, 1,600-square-foot house. There will be no discretion with this one. Or sanity, possibly.

My ambitions for the Rumble Seat were modest: I wanted to sit on my ass, fully clothed, answering emails while getting off. But even this wasn’t achievable, at least not without modifications, because the Rumble Seat is about half the size of an average chair. The genital bump is a foot off the ground. So I have to straddle it, in a squatting position with my feet on the floor, like I’m taking a shit. My butt bones immediately hurt, and just as with the equally-awkward Sybian, I have nowhere to put my hands. On my thighs? On my boobs? Pray to the lord? Pledge allegiance to the flag?

I can kneel instead, if I want to kill my knees instead of my ass, but the problem is the whole thing vibrates. The vibration is fairly rumbly and strong, so it feels good at first until it all starts blending together: thigh vibration, butt vibration, and vulva vibration. Inevitably, my focus gets divided between pleasure and discomfort.

If I develop knee problems later in life, I am 1000% blaming the sex machines I’ve had to test.

The manual’s insinuation that I could use the Rumble Seat backwards, facing the handle, is absurd. Unless Jimmyjane wants to vibrate my anus? Getting it to reach my clit requires me to arch my back so extremely that the handle jabs into my stomach. There’s even a drawing of people fucking like this, in doggie style. Oh, so now they want me to fit a dick in there too? Exactly how?

Of course, with drawings, you can make anything look plausible. Did any of the people developing this toy even attempt that second “couples” position, with the dude sitting on the Rumble Seat? WELL I DID, and my partner immediately said “no no no no” and jumped up, shaken from the intensity of the vibration on his balls and ass. The seat is also lightweight enough that it can be tipped easily, which is hazardous for both mounting/dismounting and any time you may be slightly unsteady. Like, I dunno, maybe when you’re thrusting into somebody?2

Once again, the fantasy of hetero sex trumps feasibility.

The vibration quality/strength is the only reason the Rumble Seat is not a catastrophic failure. There are five settings, easily accessed via the light-up remote attached to the power cord, and I can come on the first setting, with my pajama pants on. It reaches and engulfs my clit without much stress, which is more than the Sybian can say.3

Among my friends who tried the Rumble Seat, impressions of the vibration varied. One person likened the sensation to “sitting on a pair of clippers,” another to the dispersed vibration of a boat. One party guest deemed it far too intense for their sensitive bits, while others begrudgingly admitted enjoying the first couple rumblier settings: “I hate that I like it.” Another found the discomfort of the seat itself too distracting, concluding, “I don’t know how I could make that an enjoyable experience.”

I identify with that sentiment, considering all the shit I’ve tried hoping to make the Rumble Seat less obnoxious to use. Once, I tried lying back in bed, precariously holding the full weight of the seat above me as I stationed it against my clit. That was weird and made me question my life choices. Another time, I elevated it in front of my desk with a plastic storage box, and wow! I could answer a few emails like a regular person! But my butt bones still hurt, so I had to add a flat pillow to cushion things.

The orgasms I have from it are good. Yes. Fine. I’ll give you that. As an AC-powered device, the Rumble Seat is a powerful beast, capable of resonating through my whole genital complex, and there’s a certain thrill in achieving a hands-free orgasm. But the orgasms are also followed by me struggling to peel myself off the seat, my knees pocked with debris, my thighs itchy, my body sore. It feels like I worked really hard for my orgasm, which maybe is not how a sex machine is supposed to make you feel? At least it’s not how I want to feel. 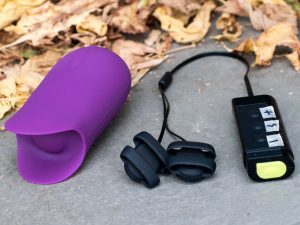 “It’s not sexy; it’s performative.” That’s what one guest said at the sex party, and it resonated with me as both a very queer thing to say and the truth. The Rumble Seat seems like it’s for somebody else, somebody else’s version of sexy. It asks me to pretzel into awkward positions I normally wouldn’t ever get into, to willingly cause myself discomfort during masturbation, and for what? To impress who? Is the way I jack off not good enough? If I were skinnier would this be better? A sex toy should not prompt such negative thoughts, and I’m pissed at it for doing so.

The Rumble Seat is cheaper than sex machines like the classic Sybian ($1,400) and app-compatible Cowgirl ($1,500), so it can seem like the price tag of $400 isn’t highway robbery. But y’all, I’d rather use the Magic Wand ($60-125) any day of the week, and so would everyone else I involved in this hullabaloo. You could even pair the wand with a compatible Liberator pillow such as the Axis. Personally, my hands-free orgasm desires are perfectly satiated by the We-Vibe Dusk + Tango, but I’ll always grab the Magic Wand Rechargeable when I want a quickie through my pants.

I’m not the right person to call any competition between ridable sex toys, because straddling stuff is not how I usually masturbate, but I am prepared to go on the record about not wasting a shit ton of money when there are other, cheaper vibrators that perform just as well. Should anyone reach into their bank account, withdraw $400, put it in an envelope, and deposit it into the nearest fire? No, and nor should you buy the Rumble Seat. I’m not saying they’re entirely synonymous — the Rumble Seat gave me orgasms, after all, which counts for something — but neither is a very sound life decision, all things considered.

And my knees still ache.

Back at the sex party, after about an hour of ridiculing and riding the Rumble Seat, it became clear that I was not going to be the maestro of granting orgasmic dreams with it. Nobody reached climax, and nobody even came close. As usual, Jimmyjane had brought people together — not through hot sex, but via bonding over their pathetic products. We moved on to more effective, less gimmicky means of pleasure and abandoned the Rumble Seat in some corner, where it sat untouched the rest of the night.

The day after the party, an attendee posted a photo in the Facebook event. It was a stack of objects that looked… familiar. “I went to IKEA today,” she wrote, “and I fully stand by our assessment that the vibrating sex chair was inspired by a training toilet.” Nine people liked the post in agreement.

Thanks so much to Betty’s Toy Box for indulging my wildest “dreams” and sending me the
Rumble Seat. To see toys I actually recommend on their site, go here.