Why do some vibrators feel better than others? Because of a difference in vibration quality, demonstrated here in slow-motion video! 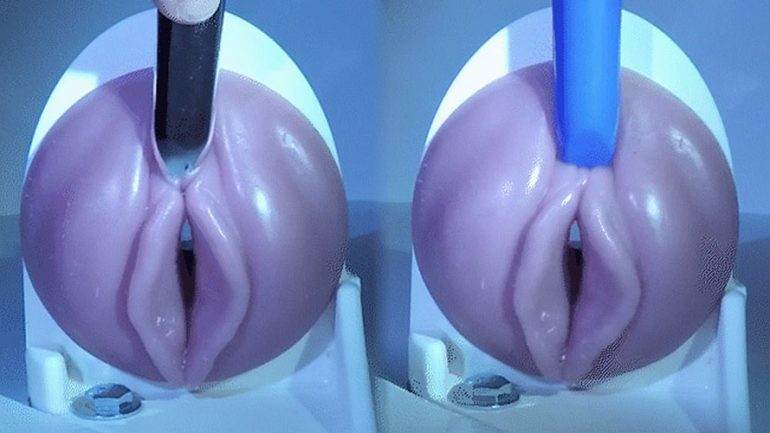 “Buzzy” and “rumbly” are words you’re bound to encounter if you spend any time in sex toy circles. These words, popularized by bloggers and educators such as yours truly, refer to the quality (not intensity!) of vibration, with buzzy characterized as a higher-frequency, surface-level vibration and rumbly as a lower-frequency, more robust vibration.

I’ve long posited — and, to be honest, stated as fact, because I’m just that presumptuous — the idea that rumblier vibrations are deeper and more penetrating. Well raise your glasses, mofos, because now I have SCIENCE and VIDEO to prove it!

Below are some video clips made by Jeff Spitzer, a former aerospace engineer who spent over 30 years designing airplanes, engines, and scads of other gadgets before setting his sights on sex toys. The last few years, he’s been obsessed with figuring out what makes vibrators tick by tinkering, dismantling, and applying physics theory to them. In pursuit of demonstrating rumbly and buzzy vibrations, he created this cool rig using a Fleshlight sleeve.

These videos were shot with a GoPro at 240 frames per second, slowed to 15 frames per second or about 1/16th the original speed. The first image features the rechargeable We-Vibe Tango, widely lauded as the gold standard for rumbly vibrations, making the labia flap like flags in the wind. The second reveals the comparatively paltry and ineffectual vibration of a shitty bullet that takes an N battery.

Thank gawd for this, otherwise I’d still be over here screaming into the void, “THEY FEEL DIFFERENT, I SWEAR, TRUST MY CLITORIS ON THIS!”

Surface-level stimulation is all fine and dandy, and there are certainly people who prefer it, but in my humble opinion, things get really good when the vibrations are able to delve deeper and stimulate the internal clit and all-encompassing clitourethrovaginal (CUV) complex. Of course, rumbly vibrations are not inherently better (and most vibes are not firmly one or the other), but it’s clear they penetrate flesh better.

That’s what rumbly vibrators are doing, and that’s how they’re able to stimulate more deeply. Rumbly vibrations are more profound, travel through flesh better, engage with the user more, and transfer their energy to the point of contact (and beyond) more readily than buzzy vibrations. This leads to the lovely jiggle you see in the video.

After taking apart some toys from We-Vibe and others, Spitzer learned that rumbly vibes use better motors which allow them to spin a heavier mass than buzzy vibes. The physics piece says that if the spinning mass is much heavier, you can drag the speed down more and thus transfer more vibration energy to the user. This is the essence of rumbly, and understanding it can help you discern the difference out in the real world.

Spread the word, ’cause I do believe knowing about this spectrum is key to understanding which vibrators you’ll love and which you’ll hate. Me, I prefer motors that lean rumbly, but mostly I just want to annihilate any vibe that’s purely buzzy.

Which do you prefer? Buzzy? Rumbly? Some nuanced mixture of both, like a complex human being?
What are the buzziest and rumbliest vibes you’ve encountered? Comment below!