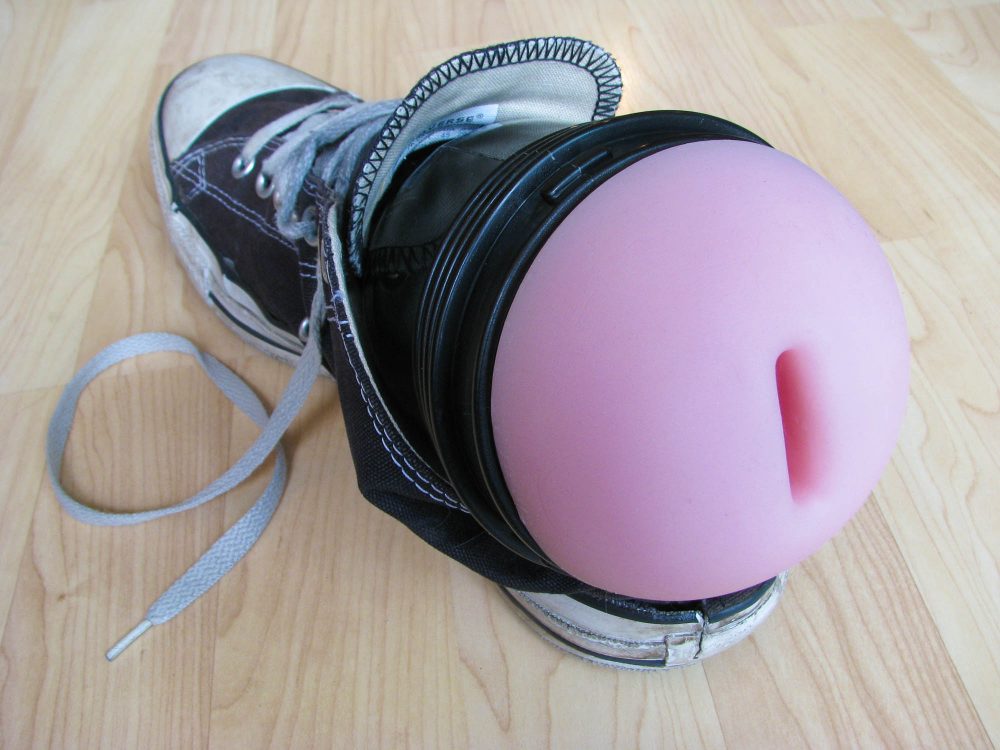 But let me put it this way: now my boyfriend and I know why the Fleshlight has its own forum.

I was expecting the Fleshlight to come in painfully heterosexual packaging, but it actually just comes in a plastic bag.1 Never fear, though, the Care and Usage brochure is incredibly heterosexual, with ladies in lingerie bending over and holding vagina Fleshlights everywhere (there is a lonesome dude on the back in a half-hearted attempt to appease teh gayz). All sexualities aside, though, the brochure is decent, explaining everything from the white plastic tube that comes lodged in the Fleshlight’s orifice (just remove it, dum dum) to numbered instructions on how to properly jack off with the Fleshlight.

The Fleshlight consists of a big ass plastic “flashlight” case (which is supposed to be discreet, except it reads FLESHLIGHT on the side) and a removable sleeve. The sleeve is a floppy, silly-looking piece of Fleshlight’s own Superskin material. Superskin is a delicate, phthalate-free (and porous, so no sharing unless you’re fluid-bonded) material that feels very much like the skin on a flaccid penis. As always with such a soft material, Superskin has stringent requirements on how it can be treated — Fleshlight warns that the Superskin may deteriorate if it meets up with some of our gooey friends: soap, detergents, oil- and silicone-based lubes. So to keep the Fleshlight in tip-top shape, it must only be used with water-based lube, and it must be cleaned only with water (and a small amount of isopropyl alcohol if necessary).

This particular Fleshlight is one of the originals, so the interior of its sleeve does not have any exciting bumps or swirls — it’s just a long, unadorned hole. Which is actually what makes my boyfriend’s reaction to it even more unexpected.

So my boyfriend is pretty enamored with the Fleshlight when he doesn’t have to hold it. It feels very much like a vagina, he says. Whilst probing around in the Fleshlight’s orifice with lube, I had to agree — it does feel like a vagina. Yes, I fingered it, and I will finger it again! The material is just so soft and pillowy…

Fleshlight cleaning is a bit tedious, as a material as delicate as Superskin really won’t last if it’s neglected. The Superskin sleeve can’t be turned completely inside out (although my boyfriend can bend a good portion of it inside out), and like I mentioned, can’t be washed with any soap or detergent. This means that my boyfriend can’t do what I do with my toys — leave them sitting out in the kitchen overnight before bothering to clean them.2 If he wants to keep his Fleshlight clean and long-lasting, he has to find a sink fairly quickly after jacking off, wash the sleeve out, and set it out to dry. It should not be placed back in its case without drying completely, or it could mold. Additionally, it can be dusted with corn starch to bolster its softness.

But ask my boyfriend, and he’ll tell you it’s all worth it. When I asked him what he loves so much about the Fleshlight, he said “the material.” Being able to fuck it in a shoe is very important too, but that alluringly soft material is the number one reason he is going to continue sticking his cock in the Fleshlight far after this review is published. Now he just needs to try all the different interior textures…

Find the Fleshlight of your dreams at Fleshlight, Fleshjack, SheVibe, Early to Bed,
Smitten Kitten, Lovehoney (international), or Come As You Are (Canada).