Terrible sex toys I used to lust after

A delightfully self-loathing, nostalgic romp through the darkest corners of my old sex toy wishlist. 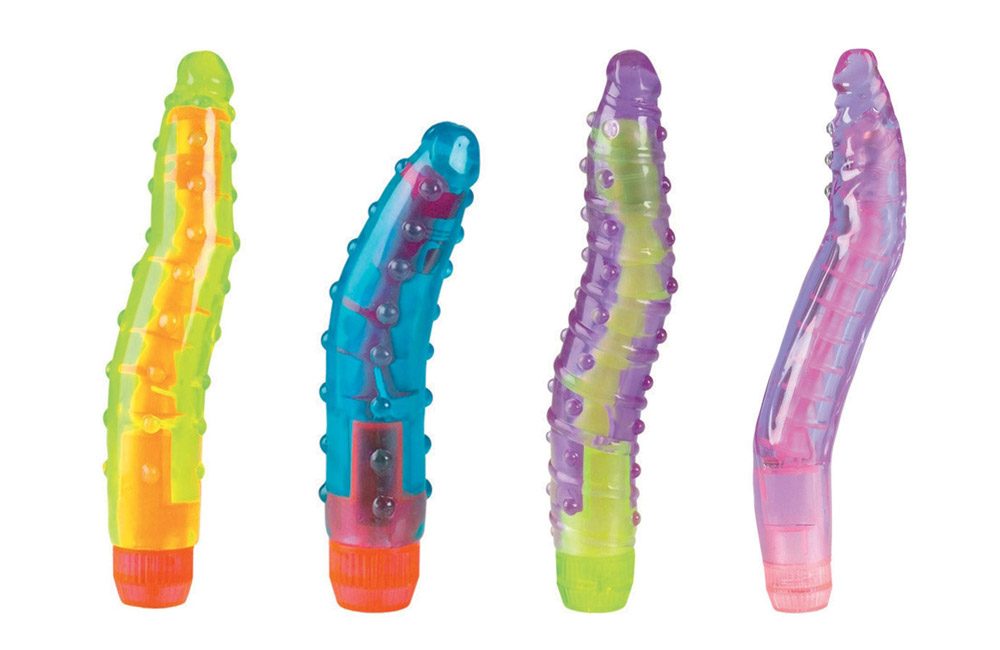 In 2007 when I started reviewing sex toys, I knew nothing about them. Oh, I knew that jelly was bad in theory, but I hadn’t yet smelled the rancid, gooey, overpowering scent that characterizes it, or felt the agonizing burning sensation that it can cause (still haven’t — insert sign of the cross here). I figured expensive toys probably had high price tags for a reason, but I was yet to be convinced to spend more than $30 on one. Oh yeah, and I’d had nary a finger in my vagina, so… I really didn’t know anything about anything.

Still, I was like a ravenous cat munching on a plate of wet food. I scoured the catalogs of online sex shops, familiarizing myself with the inventory in a way that, looking back, was merely cursory. I thought I was licking the plate clean, but because I was favoring a low price over any other factor, I was only getting a feel for the shittiest of the shit. Nonetheless, like any newly-obsessed fan, I compiled a wishlist of the sex toys I thought I wanted.

(I really hope you read that sentence in a horror movie trailer voice.)

Here, I present to you, a delightfully self-loathing, nostalgic romp through the darkest corners of my old sex toy wishlist. Perhaps this will serve as a reminder that we all start at the bottom, ignorant and stupid. Or perhaps it can be taken as deep look into my psyche, into what I am intuitively drawn to before silly things like facts and health get in the way.

This, my friends, is the first sex toy I ever bought. I’ll give you a sec to recoil in horror; I fully endorse that. I encourage it. It’s the right thing to do.

I don’t recall why I chose this toy. A sleeve that, if used “correctly,” features an upside-down penis? A sleeve with raised hearts on it that look like warts? A sleeve that is surely not body-safe? I have no memory of ever using it with that ridiculous purple sleeve on (good choice, me), so why did I want it instead of a regular silver bullet? I am an enigma even to myself.

For some reason, the Vibesicle sticks out in my mind as the quintessential thing that I really really thought I wanted before I got a fucking clue. It was one of the first sex toys that caught my attention, because look at that orange and purple one! Even now, I think it’s cute.

The best excuse I can muster is this: the translucent look of jelly — a material that nobody in this world should be subjected to, not even my enemies — transfixed me. It was visually intriguing, like a slab of Jell-o in a fanciful shape.

Another example of translucent jelly grossness? This butt plug. I liked the look of the colored swirls, which I guess is consistent with my fervor about sex toy colors that continues to this day.

Protip: if a sex toy’s name has the word “crystal” in it but it is not made of glass, it cannot be trusted. And it definitely should not go in your butt.

I think it’s a rite of passage to lust after something in Doc Johnson’s Lucid Dream line. The colors are so bright, the shapes so whimsical, the name so cute, the jelly so transparent! It’s bound to reel the newbies in.

Meanwhile, California Exotic used to have (…or maybe still has, oh god) this line called Bendable Vertebrae, because that sounds appealing. I wanted the Nubby Swirl because it looked the most like a rave. Have I ever been to a rave or wanted to go to a rave? NOPE.

In the comments section of my wishlist I wrote, “for in the future, when sex doesn’t hurt anymore!” My thinly-veiled despair is almost amusing, now. Almost.

One of the driving forces behind my old wishlist was new experiences. Like, apparently, analingus. But considering I still haven’t even asked my boyfriend to lick my butthole, I clearly am not as enamored with the idea as I thought I was.

Like many unfortunate things I did when I started reviewing (such as referring to my vagina as my “pussy”), I added this to my wishlist because I just felt like it was something I should do. Which is never a good reason for anything, much less sex toys that look like demented human tongues.

Ah, rabbits. Back when I thought rabbits had a chance at being pleasurable, my top choices were the Sugar Spoon, Japanese G-Spot Squirmy, and Sue Johanson’s Royal Surfer. Why these in particular, I don’t really know, except that the Sugar Spoon was swirly and had a scooped head (as if that had some purpose), and it was named the Sugar Spoon, which sounded delightful.

I was getting way ahead of myself, though, because when I did try my first rabbit (a fugly Sue Johanson one), I couldn’t even insert it far enough to feel the clitoral stimulator.

I was getting even more ahead of myself, because I still haven’t found a rabbit I like at all. Really I just distrust all of them.

My judgment was so impaired that this was my idea of a good cock ring. A fucking gelatinous red bull. I actually bought it, like a tool. It proceeded to bleed all over my other toys’ cords. My boyfriend, I think, has blocked out the experience of using it. When I asked him about it, he barely looked up from his book of crosswords to state, “it did not do anything well.”

And for the grand finale, here’s a truly disturbing fact: I used to want Taffy Ticklers. I guess the true horror of these toys can only be experienced. You must live to tell, like a subject on 48 Hours Mystery. And I am here to tell you never to be lured by anything that looks like these. They are prickly, brightly-colored torture. My labia shudder at the memory.

This isn’t even counting sex toys that I actually bought/reviewed, such as Her Perfect Fit (spoiler alert: NO), the Silicone Insatiable G (hint: it’s not actually silicone!), a disposable finger vibe, the Cyber Flicker (what’s not to love about a toy that requires powdering after use?), and a gaggle of boring-ass plastic vibrators.

This is not to mention entire categories of sex toys that have failed me devastatingly, like strap-on clitoral vibrators and everything remote-controlled.

Moral of the story: I don’t care if you’re a n00b to sex toys or are easily swayed by translucent jelly — acquire high standards as soon as humanly possible. Don’t waste your time trudging through crap. Don’t spend your hard-earned money on crap. This way you will not have shit toys lying around bleeding all over stuff, stinking up your drawers, and irritating your insides with toxins. You will have solid, dependable, body-safe toys instead, and hopefully, no recollection of a past life in which you longed for a 7-pound disembodied torso.

‘Til next time, take care of yourself… and each other.