A soulless machine that grabs at my insides… and sounds like a goddamn woodpecker.

It freaks me out to imagine the questions sex toy shoppers of today must ask themselves. The landscape of options has become so vast, it is no longer enough to contemplate materials, shape, power source, and noise level. Now you must ponder bizarre hypotheticals like, “is this what I want against my G-spot? A little nubbin that bobs up and down?”

The design of the OhMyG isn’t very attractive: a contoured rod with a blob on the end. The company calls it a pearl to distract from the fact that it’s a blob. According to my partner, “it looks like someone shoved a candy-coated Easter almond in it and now it just lives there.” There’s something discomfiting about the way the blob nestles down into the shaft, all those shadows and edges… or maybe that’s my vagina speaking, knowing what it feels like. Everything seems ominous when there’s reason to be afraid.

My vagina neither forgives nor forgets.

The OhMyG comes in white and dusty pink, and I own one of each because my first one kicked the bucket. Not a reassuring start for $159. Unlike magnetically-charged sex toys, the OhMyG is not waterproof. Not even a little, because the mini USB jack is exposed on the toy’s base. It comes with a cheap satin drawstring bag, one-year warranty, and instructions on how to “unseat” the “pearl” for cleaning. You pinch and pull it upward, and yes it feels very weird and wrong. I recommend doing this over the sink, because dried vag juice tends to accumulate under there.

The website also makes a big stink about how utterly noiseless the OhMyG is, calling it “completely silent.” And it almost is. It’s a very very quiet toy… until.

I couldn’t make this shit up. The moment my vagina squeezes the OhMyG, the toy erupts into a series of muffled knocks, like a pissed off woodpecker. It stutters, it skids, it runs into something inside of me, maybe my pubic bone, maybe it’s pinching me, who even knows. The first time it happened, it spooked the living daylights out of me. I yelped and jerked.

How, HOW, did nobody discover this issue in the prototype stage? Especially since the noise level of the OhMyG seems to be one of the primary reasons it exists in the first place:

IOBA started in December 2018 when Francesca and her husband Martin decided to tackle a problem that always bothered them with sex toys — the noise. Francesca — energetic, lively and Italian — always thought that there must be a better way to design pleasure devices than the rattling, screeching toys available in the market. Martin — entrepreneurial, intense, driven and German — picked up on the idea and made it his personal challenge to come up with a solution.

SCREECHING? Uhhhh. This isn’t the monkey slingshot industry; it’s the sex toy industry. I can think of zero sex toys that screech. I can name one that sounds like a woodpecker, though…

It feels like the OhMyG is chastising me for having a normal physical response. Squeezing insertables with my vag is how I derive pleasure from them much of the time, and guess what happens repeatedly during orgasm? My muscles contract. The OhMyG responds by loudly clacking, interrupting my climax to voice its unhappiness. I’ve inadvertently invented a new type of orgasm: the cringegasm.

The only way to reduce the chances of woodpeckering is to insert the toy further, past my pubic bone, into the wider end of my vaginal canal. Anatomy charts don’t give this area any specific name, so let’s call it the vaginal parlor. The OhMyG is safe in the parlor. My pelvic floor can’t contract enough there to send it into a frenzy. I can breathe for a moment. The sensation is more muted, and therefore tolerable.

But it’s not sustainable. Because of its tapered shape, the OhMyG naturally wants to migrate out of my vagina, and the closer it gets to my vaginal opening, the more unbearable the sensation becomes. The “pearl” thwaps wildly and indiscriminately, grabbing where it shouldn’t. I’m forced to act as the toy’s babysitter. I can’t ever release my grasp on the base, lest it start sliding out of me, and I can’t remove it from my vag while it’s running, lest it snag uncomfortably on my pubic bone.

Some of this might be forgivable if the toy delivered on its ten thousand promises to give me the greatest pleasure of my earthly life, but it doesn’t. It doesn’t feel like fingers or the “come hither” motion — it feels excessively pinpoint and dangerously fickle.

Up-to-date sex educators know the G-spot is less of a discrete “spot” and more of a zone, part of a dynamic network of interconnected parts called the clitourethrovaginal (CUV) complex. As such, my G-spot likes to be encompassed, enveloped, stimulated by bulbous heads and interesting shafts. Instead, my G-spot’s being treated like a doorbell, and the OhMyG is like some dude poking it over and over because he thinks selling me on his tree pruning service is a goddamn emergency.

That’s how the OhMyG feels to me: overly intense and specific. It activates my G-spot in the sense that it prods it, it pokes it, it flicks it. At times it feels similar to strong vibration; at times it is stimulating. But it’s not genuine pleasure — it’s forced pleasure. Unless the toy is perfectly positioned and my arousal level is high, my body classifies the sensation as discomfort.

Shout-out to Ben, who submitted a review on the Ioba Toys website stating that his wife “did not enjoy the sensation at all. Weird and uncomfortable.” Get Ben’s wife on the horn; she can back me up.

Meanwhile, I see all these influencers posting OhMyG unboxing videos, demonstrating the toy’s movement and squealing with glee before ever having used the damn thing. They fawn over the ribbons on the box like they’re some grand indication of luxury, excitedly parroting the company’s “noiseless” claims. Of course it’s silent! You aren’t in the process of having an orgasm around it yet!

If I ever influence anything, I truly hope it’s independent thought.

You silent bastard. I should’ve never trusted you and your wretched little “pearl.” 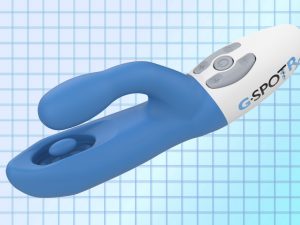 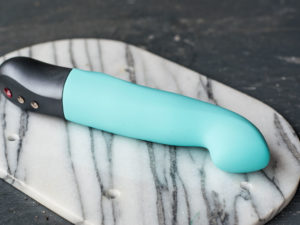 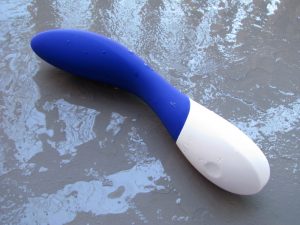 I normally never compare sex toys to partnered sex because it’s a false equivalency, but hey, they started it.

If you do want to go high-tech, there are a few sex toys that provide unique internal stimulation via movement, such as the Lovense Osci, Zalo Desire, Fun Factory Stronic G, and Velvet Thruster Mini Teddy. Not all are as “quiet” as the OhMyG when it’s being “quiet,” 1 but all are more comfortable to use, and none buckle when I clench around them. They all have at least 6 modes, and the Osci (which is most similar to the OhMyG) even has an app for creating your own.

The OhMyG, meanwhile, has a whopping three speed settings, and that’s it. If you hate the sensation of the moving pearl, I truly don’t know how you could salvage this thing for any usable purpose. Unlike the ergonomically-curved Osci and perfectly-hooked Stronic G, the OhMyG’s static shape is not pleasurable in and of itself. And it doesn’t vibrate, so clitorally it feels like nothingness.

This is one of my habits as a sex toy reviewer: I desperately search for evidence of versatility, for redeeming factors. It’s a self-protective thing. Logically I understand that some people have enjoyed how the OhMyG feels, but when I look at it, all I see is the potential to pinch, startle, and disappoint. And all I hear is clack clack clack.