Because the world definitely needs a cock ring catering to pompous rich asswipes. 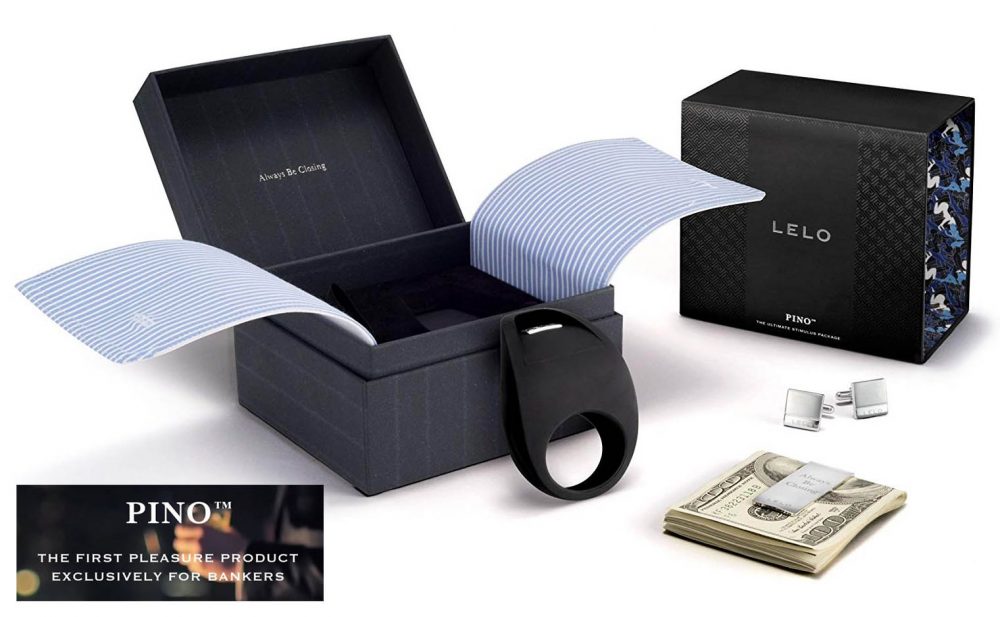 We need to talk about what’s happening with LELO.

For about three years, they’ve mostly been releasing convoluted, overpriced, “innovative” pieces of shit topped off with pretentious marketing. It began in 2011 with Lyla, a remote-controlled egg that only responded when I pointed the remote directly at my vulva. The Smart Wands, in 2012, included “technology” which caused them to fail at inopportune moments. 2013 brought us Ida, easily the most functionally deficient LELO toy I’ve ever tried (that’s putting it mildly), and the useless Hula Beads. This year, we were blessed with Ora, an “oral sex” simulator, which was a waste of my clit’s time.

And now we have this.

Your eyes do not deceive. That is a cock ring with a pinstripe-lined box, LELO-branded cufflinks, and a money clip engraved with the phrase “Always Be Closing.” Its tagline is indeed Exclusively for Bankers.

I’m sure you’re having a visceral reaction to me merely stating these objective facts, but allow me to make it a lot worse by quoting the press release and embedding the accompanying promotional video.

According to the company, the PINO “is the first pleasure object ever created to satisfy the hedonistic sexual cravings and excesses exhibited by members of the financial world, with LELO’s promotional video a testament to the role PINO will play in bankers’ lives.”

Steve Thomson, LELO’s head of marketing said, “PINO is the ultimate stimulus package, the most exclusive couples ring in the world and is aimed at the Wolves of Wall Street and Gordon Gekkos of our communities. They’re rarely satisfied and always looking for new limits to push, so PINO is about meeting those demands and adding a new adventurism to their sex lives.”

. . . “Can you think of a more demanding group to design a sex toy for?” Thomson said. “For most of us, sex is one of the most wonderful, pleasurable experiences in our lives. In the male-dominated, testosterone-drenched context of banking, it’s an obsession, and that perhaps explains the demands LELO receives and delivery to financial institutions. Bankers are both proud of their sex lives but also want to make sure they’re doing it right. PINO is kind of an external consultant in that respect, and as a sex-positive, inclusive brand — LELO creating this product 100% serves a demanding group.”

The new PINO is a premium couples’ ring worn by men during sex, with its stretchy silicone ring accommodating and enhancing men of all sizes. Its vibrating motor brings enhanced pleasure for her, “while ensuring the man will always close the deal with his partner,” the company says.

They’re right! The douchebag market was completely untapped before now! The world definitely needed a product catering to pompous rich asswipes! Those dudes were not taking up enough space to begin with; they needed to add more shit to their penises.

In this techno-saturated nightmare, all bankers are animalistic, unhinged, sex-obsessed men who get wasted, act stupid, objectify women, piss away their money, and get in bar fights… but don’t worry, they wake up just fine the next morning to put on their ties and go to their Important jobs.

When LELO posted this video to their Facebook page, the people told them what they really thought, in potentially the first ever comments section not to disappoint.

Whatever happened to the LELO of yore? The LELO that launched toys like the Siri, Ella, and Luna Beads… simple toys with simple aims and great execution? What happened to modest toys like Gigi and effective toys like Mona? What happened to making sex toys that work with actual human anatomy? Or prioritizing the user experience? Or modes that people actually like? Or, god, marketing that doesn’t insult the entire human race?

Let me remind you, LELO, since you seem to have forgotten, about the principle on which your goddamn company was founded.

. . . Leaving their jobs to work on LELO full-time, the trio agreed to base everything on the concept that intimate items designed for women should be designed with women in mind.

Where were women when Pino was conceived? In the constructed reality of Pino, women are just fucktoys that shitty dudes take home after getting wasted. Women are disembodied ankles and bitches who flip men off (but secretly want to fuck them). Women are vessels upon which men project their egos. Women certainly aren’t bankers.

This makes me feel sicker than I did watching that video of people making Girl Scout cookie shots. And that’s saying a lot.