Wondering if the second generation Gigi 2 is better? I reviewed it here.

Turns out, the Ella has spoiled me. I know — the Ella’s about half the price of the Gigi and it doesn’t even vibrate; how could it surpass the Gigi? Well, vibration isn’t everything. And that’s a big statement for me to be making, but in this context, I’m willing to make it.

Don’t stop breathing, over there. Hear me out. There is plenty to love about the Gigi. It’s made by LELO, so it comes in the most exquisite packaging ever: a lovely black box, with a white satin drawstring pouch and a one-year warranty. It’s a beautiful piece of erotic art in and of itself — a lovely deep magenta shaft, a ribbon of silver, and a white plastic handle with controls that light up. The jack for the charger is concealed by a blip of silicone, to keep liquids and lubes out. There is no aesthetic element of the Gigi that isn’t elegant.

The Gigi is one of those toys that I have always seen reviews for and pictures of, so I had my own assumptions about it. I always imagined that the entire shaft of the Gigi was made of silicone, so I was surprised to find that the shaft is hard. Its texture is soft, of course, as it’s covered in 100% silicone… but underneath, it is hard as a rock. Unlike some other vibrating silicone toys I’ve used, it will not flex in any way. I assume this has to do with the mechanical inner workings of the toy, and allows the vibrations to be stronger than if they were traveling down a flexible silicone shaft.

Unfortunately, the Gigi emits a subtle high-pitched whine on some of its lower settings. I’m very sensitive to sound — I will delete mp3s if they have the slightest hint of distortion — so I can’t stand to use those settings. 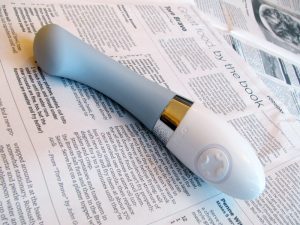 The Gigi has four steady vibration levels, but I always skip the first two. Then it has three pulsation speeds and one rollercoaster vibration level, and each of these can be strengthened or weakened via the circular control panel. On the panel, the + and – stand for vibration strength, while the up and down arrows cycle through the different functions. Overall, the vibrations are sufficient in strength and fairly quiet. As with other vibrating LELO toys, the Gigi can be locked for travel by holding down the middle of the control panel for five seconds.

The Gigi feels nice on my clit, but let’s not kid ourselves — this is a G-spot toy. And my G-spot requires an extreme amount of stimulation. I have to thrust like a mofo to finally squirt. I’m not sure the Gigi was built for people like me. When I thrust quickly with it, the hard shaft sometimes gets caught on my pubic bone (an issue I do not have with the Ella, as it is pliable), and the silver ribbon occasionally irritates my vaginal walls.

To make matters worse, thrusting like a mofo requires grasping, and I found the Gigi’s plastic handle very troublesome. Firstly, this toy is just really short — only a little over six inches in length — so it’s easy to lose the shaft in my vag and have very little to hold. Secondly, the handle is plastic, which does not play well with lube and squirt. Using the Gigi, I have to wipe the handle and my hand off periodically, or I won’t be able to thrust. This has the unfortunate side effect of momentarily ruining my momentum.

And while the location of the control panel makes for a sexy, streamlined toy, it is in the exact spot where my thumb needs to rest. You can infer the issues that inevitably arise from that dilemma. Although I was definitely aware of the moments when I accidentally changed the vibration function or intensity, I did not find the vibrations to make much of a difference when I was thrusting. They didn’t greatly enhance the experience. Actually, I became neurotic when the Gigi was on a pulsation mode and I was thrusting out of sync with it.

Get the Gigi at one of my fave shops:
SheVibe, Enby, LELO, Babeland, Good Vibes, CAYA (Canada), or Lovehoney (international).

Update: The LELO Mona 2 is everything the Gigi wanted to be.