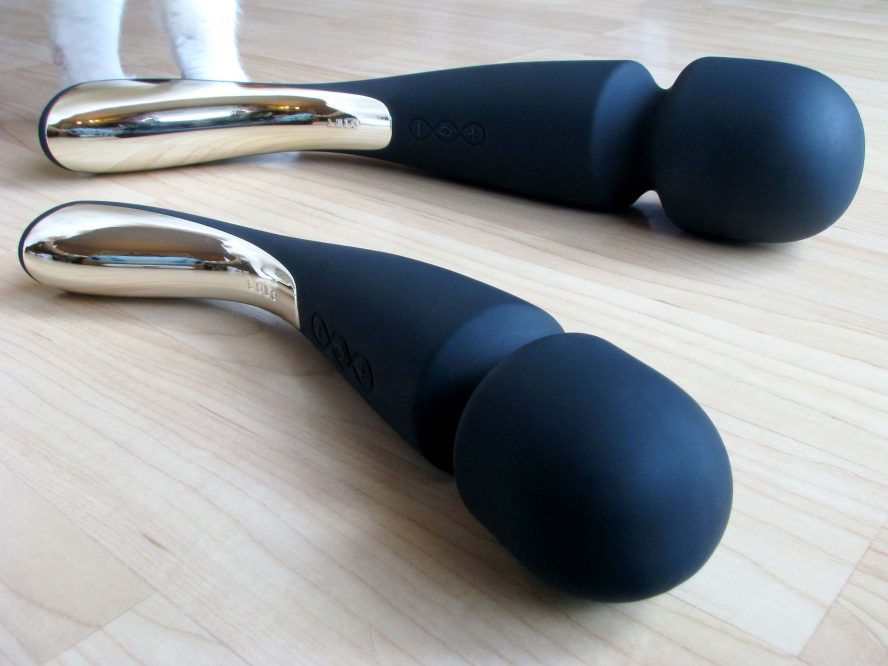 You can’t tell from that artsy-ass photo I took, but the medium Smart Wand is about half the size of the large one, at 9″ long and 1.7″ in diameter at the head, versus the large’s 12″ and 2.4″. The large comes in the most enormous LELO box I’ve ever seen. Both come with storage bags, but the medium gets the usual satin, while the large gets an odd neoprene that reminds me of knee pads.

Because there must always be a gimmick that nobody on earth actually needs, the Smart Wands have a mode called SenseTouch™. This means the toy has “touch sensors that allow vibration strength to build as soon as the wand tip comes into contact with the body — creating the most professional massage technique that works intuitively with your body and your needs.” (Yes, they are totally going with the whole “back massager” story.)

In this case, SenseTouch appears to be code for “doing whatever the hell I want.” Sometimes it acts like it should, increasing in intensity when I press the toy against my skin. Sometimes it does the exact opposite. And sometimes I hold the wand out in front of me and just watch it have a little moment with itself, changing settings apropos of nothing.

Worse yet, the SenseTouch “feature” seems to have tainted all the rest of the settings, somehow. Both Smart Wands have a glitch which causes their vibrations to drop down in intensity out of nowhere. This is not a defect; according to LELO, it’s a “limitation of the technology,” and it has been confirmed by retailers as well as reviewers.

The medium Smart Wand is especially volatile. When I’m in regular mode and press the toy to my clit, the vibrations immediately decline. I literally can’t get it to stay on its highest intensity unless I hold down the plus button.

Because yes, your orgasms are not safe. Watch as it brings you right to the edge, then, at the point of no return, drops down to a lower intensity, causing you to whimper in agony as you orgasm at what might have been. …And I would know. (File this under being a sex toy reviewer suxxxxx, guyz.)

Also, the Smart Wands glitch mercilessly if you are wearing underwear. I DON’T KNOW WHY. I stopped asking questions.

Considering how ergonomic the these things look, it’s appalling how ergonomic they are not. There is no good place for me to hold a Smart Wand. If I grab close to the head, I feel all the vibrations in my hand and risk accidentally changing settings. If I grasp the middle, I can’t change settings with one hand. It’s all awkward.

And the vibration resonates through the handle a lot. My hands haven’t itched this much since the Rock Box.

Unlike most LELO toys I own, these toys can’t hold a charge for shit. Several times, I’ve fished them out of my drawers only to find them inexplicably drained. Fuckin’ things SUCK. They charge quickly, but that doesn’t matter when you have pants off, lube in hand, and a buffet spread of toys on your desk.

I wanted the medium Smart Wand to be everything the Mystic Wand is and more. But it is not. The Mystic Wand is stronger, with controls that make sense, a comfortable shape, and a notable lack of glitching.

I wanted the large Smart Wand to be everything the Hitachi is and more. But it is not. The Hitachi is stronger, with controls that make sense, a comfortable shape (compared to the Smart Wand… which is saying something), and a 30-year history of not glitching.

When it’s behaving, I like the large Smart Wand well enough. I can use it on bare skin, and the silky, seamless silicone head feels good. It’s strong, with vibrations ranging from deep and rumbly to intense and buzzy. I even bought this silly-looking Flutter Attachment to help concentrate the vibrations, and that works fairly well. BUT THE LARGE SMART WAND IS $199. It is OBSCENELY expensive. Offensively expensive. Nothing-can-justify-that expensive.

I guess I’ll keep the large Smart Wand around to jostle congested snot from my nose — if it’s charged. But for the times when I want to whip it out for use on my genitals, I can only assume it won’t be ready. It won’t be charged, or it’ll be glitching. I’ll grab my rechargeable Hitachi instead, and I won’t be gutted.

Get the Smart Wands at SheVibe, Enby, or Pleasure Chest.