The vibration was nearly too much. But I would persevere. 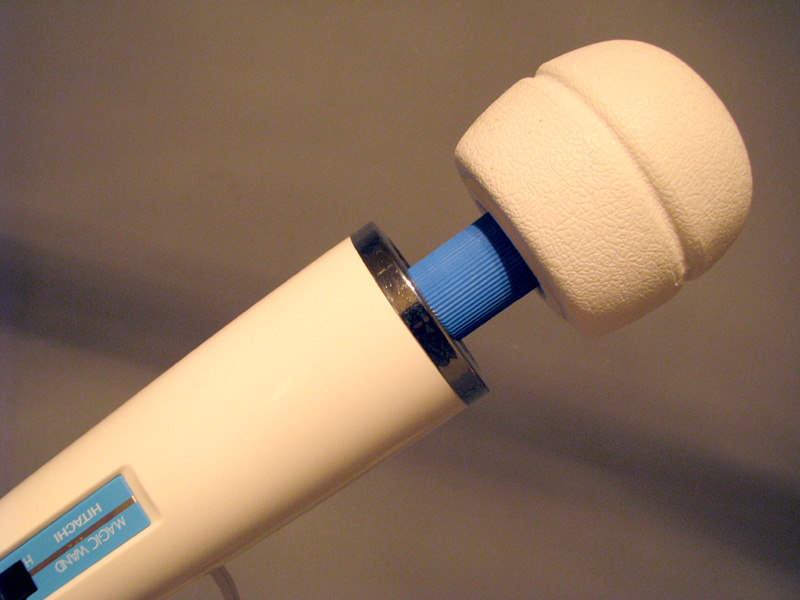 Oh hey! I reviewed the updated (Hitachi) Magic Wand Original and
Magic Wand Rechargeable. Those are much better reviews, so read them instead, yeah?

Hello, hello, reigning champ of vibes! Pleased to meet you. I thought I never would, as I was always put off by your grandma-esque appearance. But, presented with the offer to review you, I could not resist. I had to know. What makes you so great? Why do the bloggers shorten your name to the majestic Hitachi? Am I going to shudder and squirt when I orgasm?

You came in a laughable box plastered with photos of dorky people using you on innocent spans of skin: backs, arms, shoulders, legs. But I knew the truth. Babeland’s cute plus and minus logo was taped on the box. I opened the box and flipped through the instruction manual.

I plugged you in and turned you on “low.” Hey, I actually expected you to be louder. I guess all the hype worked in your favor this time. You sounded somewhat like an appliance; a higher-pitched vibration than most battery-operated vibes. I pressed your large head against my vulva through my pajama pants. Even then, the vibration was nearly too much. But I would persevere.

The only time I have been able to handle your intensity has been when I’m about to come anyway. I toss my Xtreme Pack G-spot Bullet away and pull you over to me.

My orgasms with you have not sent me into orbit yet, but I will be patient. I know eventually I will sing your praises just as everyone else has, Hitachi. I just need time.