Movie Night: The Girl Next Door 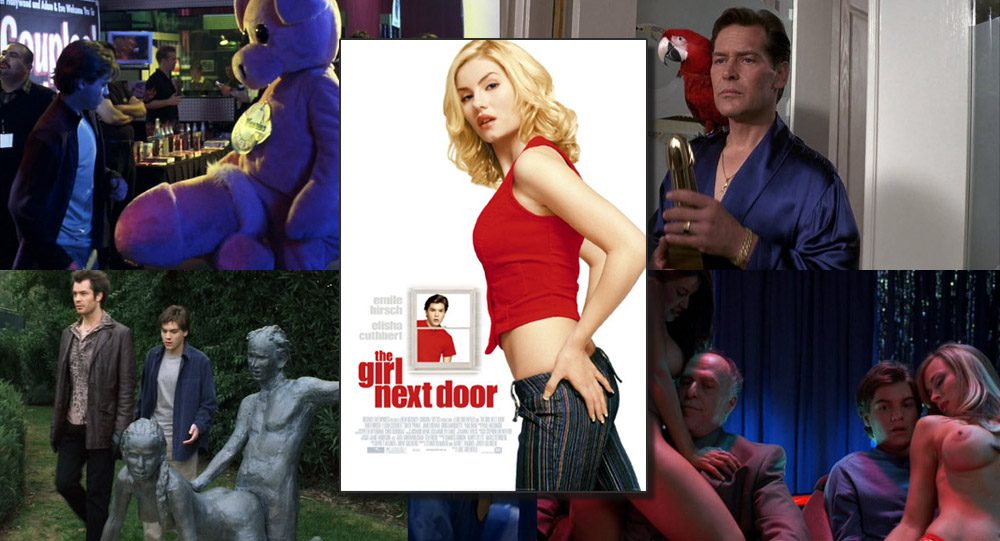 I was 17, and like all 17-year-olds, I wanted to be above the inanity of this movie. But the inanity is what makes this movie great.

Billed and marketed as a teen sex comedy, I find this movie so lovable, quotable, and yes, at times even relatable, that it has become one of my favorite movies of all time. And definitely one of my favorite comedies, since I tend to hate most comedies. (It helps that there aren’t any jokes about bodily functions. Besides jizzing.)

Things I love about this movie: the incredible soundtrack,2 how fucking hot Emile Hirsch is, and the way the movie seems like it’s about to end about three times before it actually does. All of this, and something else that’s hard to articulate. Something nostalgic.

Maybe it’s because Matthew reminds me of myself. It’s senior year, and Matthew is about to graduate with no fond memories. He’s student council president, he’s been accepted to Georgetown, but he never really fit in and doesn’t have anything to write in his I’ll always remember… yearbook blurb. He stares longingly out the window as the jocks skip class, briefly wondering how they do it — then concluding “they just don’t care.”

I know the feeling: Matthew is burdened by giving a fuck.

Now, it’s entirely implausible that a hottie like Emile Hirsch would be an unpopular wallflower, but I don’t care. I’ll take it. I like it. Because he is wonderful. Listen, I watched a movie in which he wore his dead mother’s coats and stroked a pet chicken. I’ll watch anything with Emile Hirsch in it.

Did I mention Elliott Smith’s “Angeles” is playing during this part? I dunno why but this just GETS TO ME. In the groin area.

Danielle, who I hilariously called “a heap of succulent trouble” in my high school review, is easily the weak link in this movie. She’s a caricature of a woman, the stereotypical ~hot bitch xoxox~ who drives a powder blue VW New Beetle and wears Britney Spears pants with ties on front and no back pockets. She also never fucking closes her mouth. Even 500 viewings later, I’m still annoyed by that.

Her personality quirks include sensually taking off her clothes in front of open windows and asking Matthew “what’s the craziest thing you’ve done lately?”

His reply: “so much nuts stuff, it’s just off the hook, off the walls.”

Matthew is clueless about how to interact with women. Eli’s advice, of course, doesn’t help: “take her to a hotel room and bang her like a beast. What would JFK do? You know he’d tap that ass.” But even Eli, later given the opportunity to squeeze a pornstar’s boob, sheepishly declines. He’s all talk. A facade. Like a teenager.

For about 30 minutes, the movie follows the formula you’d expect: Manic Pixie Dream Girl shows nerdy guy how to REALLY LIVE! They skip school, trespass and skinny dip in a pool, and make out at a high school party full of jocks — complete with slow motion red cup splooshing into the grass.

The movie basically goes apeshit after this, and to continue to apply logic would be a bit of a mistake. We enter a strange world where kids take road trips to the AVN expo, 18-year-olds are somehow allowed into alcohol-serving strip clubs, and a scholarship speech given while high on ecstasy is met with a standing ovation. Obviously, this is where the movie gets really good, and where I can’t tell you much for fear of ruining the fun.

The overall craziness is peppered with little moments of hilarity that kill me every time. Matthew nervously unzipping and zipping his jacket. A bodybuilder named Mule. An old sex ed video in which the sullen protagonist tells his friends he can’t hang out: “I have a baby now. Because of prom.” Kelly and Matthew casually walking by a statue of people fucking.

In classic movie style, the stakes are raised, everything spirals out of control, and all hope is lost. I can’t tell you, exactly, how hope is regained, but it happens during prom night and looks a little something like this:

When all’s said and done, we’re treated to a glorious final montage set to The Who’s “Baba O’Riley.” No bullshit cliff-hangers here; the movie wraps things up conclusively without seeming contrived. There are small, strange victories for each of the characters. Klitzy’s, especially, always makes me smile.

The Girl Next Door is a movie for people who didn’t fit in with the guys who were “mackin’ all the honeys”:

And that was definitely me.