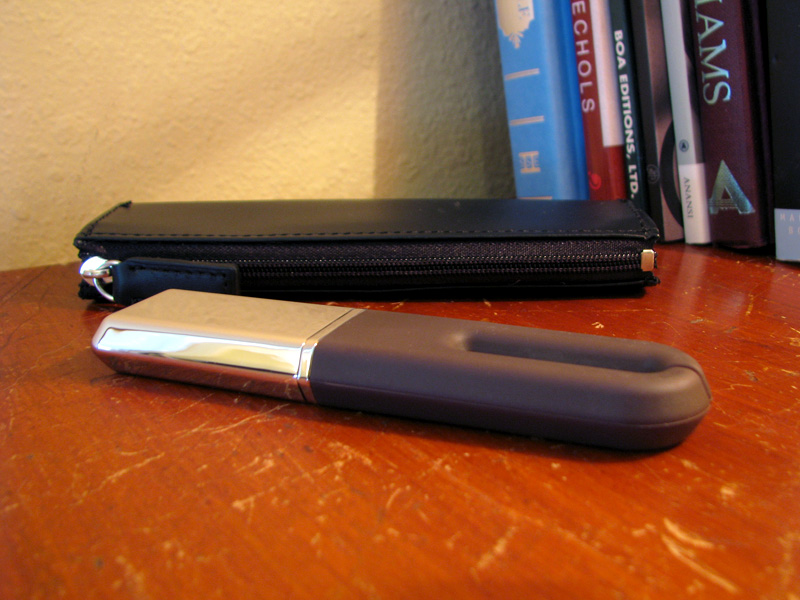 The whole shebang comes in a small, trapezoid-shaped cardboard box. The back of the box reads, We believe excess packaging is a waste. But pleasure never is. Our simple packaging is designed to minimize environmental impact. Quick start info is printed inside the package, and further product information can be found at the permanent URL engraved on the enclosed Crave charm. The silver charm lists a URL that is both hard to read and confusing — Lvcrv.com/wlove (you’re welcome).

The Duet’s beautiful exterior only makes its lackluster performance even more maddening. First of all, when you turn it on, it pulses to alert you about its battery situation. If it’s fully charged, it pulses four times. I appreciate the gesture, but anything that delays my getting off is not cool.

The Duet has dual motors and, oh look, guess what — it has the same problem that the Jimmyjane Form 2 does. The two-pronged, dual motor thing is just really wonky. You never know when a random jolt will go through one of the prongs, or when the thing will start weirdly pulsing… and this is on the so-called “steady” vibration mode. It changes all the time depending on how you hold it.

But perhaps worst of all, the blunt edges of the tips are uncomfortable and off-putting. Remember, I’m not even terribly sensitive to seams, but these edges are annoying. At any adjustment of angle, I run the risk of pinching or prodding my clit. Sure, I can turn it so the edges aren’t pokin’ me, but then I only feel one of the motors. Which is not enough to get me off. [Note: A 2nd generation Duet is now out, with more power and a new tip design (wider gap and softer edges).]

Yeah, the vibration strength is not awesome. Not awesome at all. At its highest, it’s comparable to the second strength (out of five) of the Form 2. The LELO Mia, also USB rechargeable, is stronger than the Duet, and it only has one motor.

More power, less glitches, and a full circle shape instead of blunt talons would’ve gone a long way. Instead, all the Duet has going for it is that it looks pretty, comes with a nice storage pouch, and holds a charge well.

If you absolutely must have something with the rabbit ear shape, the Je Joue Rabbit Bullet is stronger and more comfortable, and I also like the Toyfriend Snazzy and Fun Factory Volta. Otherwise, my favorite rechargeable clit toys are the We-Vibe Touch, LELO Siri, Leaf Life, and LELO Mia. In the USB rechargeable realm, the LELO Mia easily reigns supreme. It might not have as much shiny embellishment as the Duet, but it’s stronger, more pleasurable, and $85 cheaper.

The engraving on this toy makes me feel married to it, inseparable from it, and a little compassionate toward it — but I have a feeling it’s gonna be seeing the dark depths of that leather pouch for a long, long time.

Get the Duet at Good Vibes, Babeland, or Pleasure Chest.