I knew I was destined to be a writer. But real writers don’t write sex toy review blogs. Or do they? 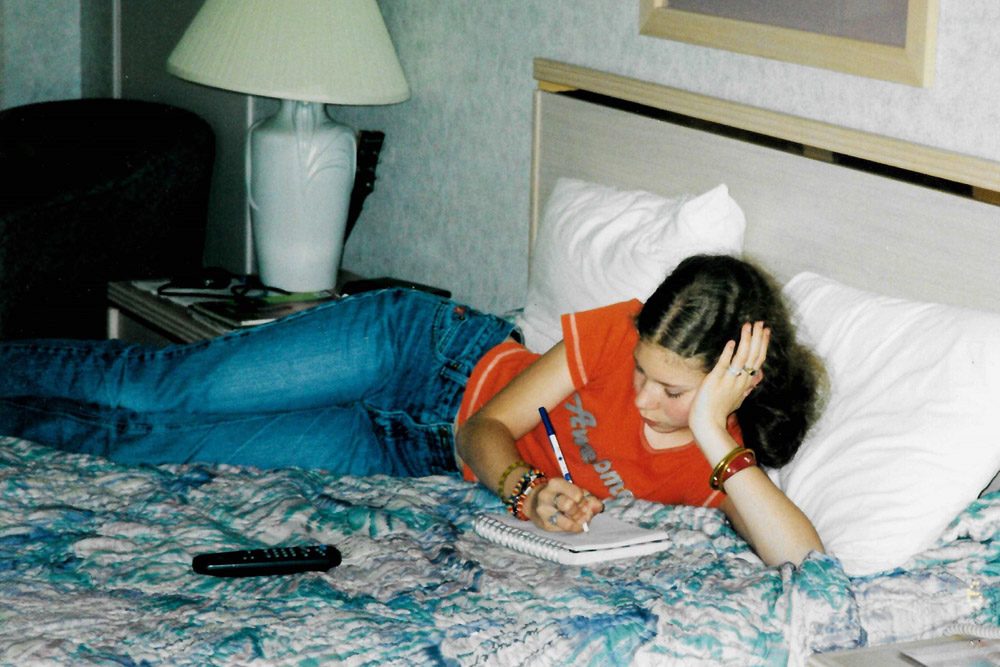 I always wanted to be a writer. I wrote e.e. cummings quotes on the inside of my closet and on the rubber of my shoes; I spent my high school nights getting high on raspberry mochas and writing bad poetry. I amassed several awards and accolades when I was younger — one time I even attended an award show in New York City — but nothing meant more to me than this Golden Author Award bestowed upon me by my fifth grade teacher. While others received frivolous awards for being class clowns, I got a swanky pen — and this. It was proof: I was destined to be a writer.

Actually, that’s a lie. There were signs that I would both blog and document my sex life. I had a scandalous zine in the age of AOL. I had an online diary for years after that. I made my first website in the sixth grade, with many to follow. I loved Harriet the Spy and totally understood Harriet’s pain when her classmates read all the mean — yet true — things she’d written about them.

But real writers go off to grad school at Columbia and get published in literary journals and drink wine in rooms full of important people. They don’t write sex toy review blogs.

There is a way of telling stories. A red pen. A teacher to move it.
Instead you have hands, and a Light inside you, and Bones.
Instead you have ideas, which ricochet, and an anger that won’t sit still,
and dogs from outside which come to die in the quiet spots inside of you.
. . . There is a way of telling stories. They tell you it is not like this.

—Shira Erlichman, “How To Tell a Story”

As a kid, and especially as a teenager, I wrote constantly. During family trips you could always find me holed up somewhere with my journal, which I kept for 10 years. My love for coffee was borne out of needing an accompaniment to my typewriter clacking. In high school I was opinion editor of the newspaper, and my senior project was a book of my own fiction. I took writing classes at the local community college and distinctly remember the exhilaration I felt after my first day. It was where I belonged.

Then I went to college and took every writing course offered, including an independent study that I made up. Couched in academia, writing was different. I was less and less inspired as the years went on. I wasn’t 17 anymore, full of hormones and angst — the sort of fuel that makes writing great. I began to hate all the editing, all the second-guessing, all the character development and faux scenarios. My fiction and poetry had become rather soulless, and the writing process felt like a chore.

After college graduation, I never did get the urge to write a poem or a short story. What I did get was the itch to work on blog posts. On the side, I had started up a little sex blog. I needed a distraction from Chaucer (did you know Middle English is really hard to read?), and reviewing sex toys gave me both orgasms and a casual writing outlet. I didn’t know a lot about sex toys, or reviewing for that matter, but I was learning and putting all my obscure CSS knowledge into action.

I loved what I was doing, but that didn’t mean it didn’t sting when I watched friends go off to get their master’s in writing. It hurt the 16-year-old girl perpetually holed up in the bookstore with Kurt Cobain’s Journals. The girl who once thought buying Writer’s Market was a solid decision. The girl who teachers swore would become a big shot writer someday. It felt like I had failed.

And on some days, it still does.

But when I actually thought about it, I was just clinging to my teenage vision of success as a writer. I didn’t want to go to a writing program at all — I’d spent enough damn time listening to classmates tell me to clarify my character’s motivations. I was not thrilled by the prospect of sending manuscripts everywhere only to be rejected constantly. Even if I did get published, even if I achieved marginal success, I wasn’t going to make much money from it.

Besides, was being published what I really wanted? Do I have some talent within me that is only visible if I write a short story Crazyhorse wants to print? It’s 2015 now. People read books on Kindles, newspapers on phones, and blogs on computers. Being published in the traditional sense is not the only way to be a viable writer.

Then what is? What is success, to me?

Success does not have an industry or an entrance exam. Success is being awesome at what you do. Success is being trusted, having people look to you for advice. Success is doing what you love and getting paid for it. Success is your father telling you he admires your business model, your mother saying she loves reading your posts.

If you wrote something for which someone sent you a check, if you cashed the check and it didn’t bounce, and if you then paid the light bill with the money, I consider you talented.

It was freeing for me when I accepted that I cannot construct poems that could stop your heart with their beauty. I cannot create unforgettable characters and intriguing plot lines and deep, meaningful story arcs. Others have always done it better and they always will.

What I can do is write competently. I can organize sentences. I can express ideas. I can give my opinion clearly and do it in a way that will not put you to sleep. I adore sex toys, and now, seven years in, I know almost everything there is to know about them. I feel strongly that they can change people’s sex lives, and I believe in our right to utilize them without shame, stigma, or misinformation. I’ve spun a tiny silly blog into a profitable business.

It has not been easy to accept that this is my medium and my subject matter. Sexuality scares people. Honesty when it comes to sexuality scares people. It can be hard to feel important in the world when you can’t even tell people what you do for a living because you don’t want to deal with their response. I get emails from my college about alumni honors banquets and know I will never be recognized at one. I emailed one of my professors to tell her about my blog and she said, “why can’t you keep doing all the supremely cool stuff you are doing AND grow your writing out?” I got an OkCupid message from an old high school classmate who desperately wanted to read my writing, but “not the dildo stuff.”

I’m just as bad. In my head there is a hierarchy, with stuffy books of poetry at the top, and review blogs near the bottom, and I can’t seem to shake it. Sexual shame was never instilled in me, but I still feel the weight of our culture’s denigration of sexuality. I feel the perceived disappointment of all my professors and mentors. In my darkest moments, when I get a truly venomous comment or see my friend’s latest Facebook update about her book’s progress, my mind goes down the same path.

I’m not a real writer. I couldn’t actually get published, so I resorted to writing on the internet. About my genitals no less. I’m no better than anyone with a Blogspot, perhaps less because I write about my vagina. This is not an achievement. I’m kidding myself.

I try to counter these thoughts with questions like, doesn’t sexuality matter? Discovering new forms of pleasure? Is this not a worthy pursuit, to help people with that? Doesn’t writing matter, in any form? Can’t we still marvel at a beautifully structured piece of writing, subject matter aside? Isn’t reviewing a respected form of public service? Hey, isn’t the internet important? Creating something out of thin air? Putting one’s self on display for the internet wolves? The difficulty of running a blog?

I remind myself that blogging — and blogging about sex — is the perfect encapsulation of everything I love: sex toys, writing, web design, photography, and egotism.

I always longed for people to read and appreciate my work. That’s why I had a zine, and an online diary, and friends who put up with me thrusting my journal in their faces. With blogging, it’s the same. I have a little fan base providing feedback and back-pats along the way.

Blogging is more immediate and colloquial than a book. It can evolve and change and I can edit old posts to pretend I never said anything idiotic. There’s no boss man or editor hovering above me telling me what to write. I can cuss as much as I goddamn want, or commit grave grammatical errors on purpose.

That’s why I love it. The readers. The catharsis. The blank white box where anything goes.

I know as a sex educator I’m supposed to say that the most rewarding part of my job is helping people… but that’s not what I live for. I write for the joy of it. I delight myself when I come up with something clever, or when I construct a post which flows so effortlessly it’s almost like I didn’t just spend hours moving the sentences around one by one. I live for the sound of my partner’s laugh as he reads one of my posts. I live for that fleeting moment of unbearable excitement when I feel like I’ve written something really, really good.

The only happiness you have is writing something new, in the middle of the night, armpits damp, heart pounding, something no one has yet seen. You have only those brief, fragile, untested moments of exhilaration when you know: you are a genius.

―Lorrie Moore, “How to Become a Writer”

Still, writing — the actual act of it — is not easy. I can insert links all day (that is, in fact, my preferred procrastination method), but getting myself to sit down and just write is always the hardest. I just spent all day cleaning a closet instead of finishing this, and you don’t want to know how long it’s been in my drafts. As it turns out, writing never became less hard. It simply became different.

There will always be a part of me who feels a divergence in my life, another path I could’ve taken but didn’t. The path everyone expected. The path I expected. But then I think about how sometimes it seems like everything was leading to this. Diaries, journals, having gay rendezvous as a teenager, my parents yelling at me to stop spending every hour on the computer, getting turned on watching Undressed, teaching myself HTML instead of going outside for recess, feeling petrified of the expectation that I would submit my work to literary journals fruitlessly until the day I died…