I put lube, not soap, in my automatic dispenser — and it revolutionized my sex life. 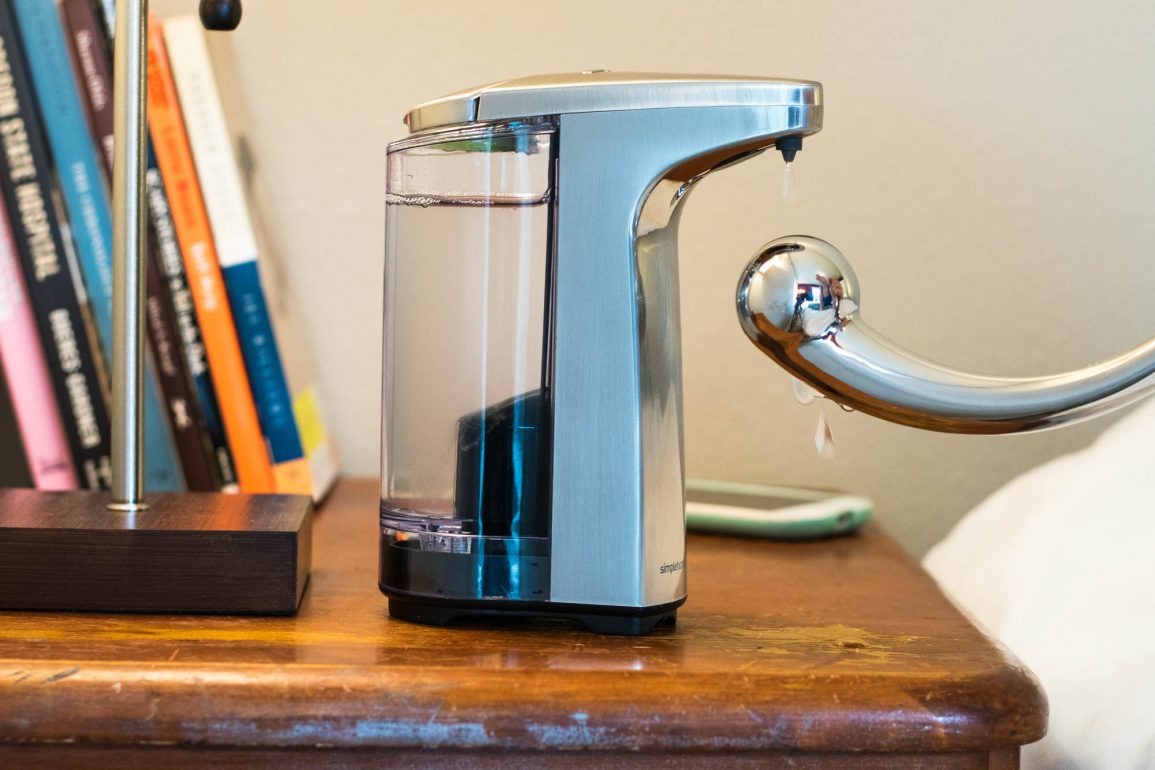 Many a time, I stared at it longingly in the aisles of Bed, Bath, & Beyond. Among the as-seen-on-TV contraptions and glistening stainless steel bathroom accessories it beckoned, goading me to use it for nefarious purposes. I’d never spend $40 on an automatic soap dispenser, but in my household, the simplehuman Sensor Pump has a much more life-sustaining function: dispensing lube.

What a goddamn miracle. What a fucking world.

The dispenser I bought and subsequently perverted is by simplehuman, manufacturers of fancy household accouterments such as motion-activated trash cans, app-controlled make-up mirrors, and adjustable shower caddies. Positive reviews (which, by the way, become a lot funnier if you imagine them being written about lube rather than soap) and brand name recognition led me to choose it above others — that and its transparent reservoir, which some other automatic dispensers don’t have.

The innocuously-named Sensor Pump has a 2-year warranty, runs on four AAs,1 and operates like many sex toys do: holding the plus button for three seconds turns it on, minus turns it off. The buttons also increase and decrease the volume of lube the thing releases, from a dime-sized dollop to a seemingly never-ending glob.

The non-removable reservoir can hold an entire 8.5-ounce bottle of Sliquid H2O like a champ, which is awesome but also means it’s kind of a big device — not terribly inconspicuous. It comes with its own complimentary bag of soap, comparable in thickness to the more viscous Sliquid Sassy which several people have successfully used with it, so I figure it’s compatible with many lube consistencies.2 However, silicone-based lube is off limits, as it can damage internal silicone tubing.

This thing has revolutionized my sex life, both solo and partnered. In the dark, my partner and I giggle each time the dispenser emits its quick little bzzzt. We seamlessly transport lube from our palms to our genitals. We spurt it on toys and carry them with our hands cupped underneath as if to catch crumbs. Lube is more integrated into the experience of sex, less of an interruption… it’s simply easier.

But protip: instruct your partners on how to use it beyond “press the right hand button.” Once my partner held the button too long, causing it to ejaculate so much lube onto the Mystic Wand he had to wipe the excess off, and I proclaimed for the first time in my life, “so there is such a thing as too much lube.”

That’s a downside, for sure: using the button to manually dispense causes a high volume of lube to gush out. This isn’t a huge problem, but I have to do it fairly often with toys the dispenser doesn’t like.

Over time, I began to suspect my lube dispenser was racist. I discovered it wouldn’t dispense onto black toys, like my Siri, Laid D.1, Elise, or Mimi. It wouldn’t respond to the chocolate-colored Tantus Uncut. Even the greyish blue Form 4 was too dark for it.3 But then I realized it didn’t work on anything clear either, like the Jollet or transparent glass.

With a little internet sleuthing I figured out why:

. . . the soap dispenser uses near-infrared technology, which sends out invisible light from an infrared LED bulb for hands to reflect the light back to a sensor. The reason the soap doesn’t just foam out all day is because the hand acts to, more or less, bounce back the light and close the circuit. If the reflective object absorbs that light instead, then the sensor will never trigger because not enough light gets to it.

So, while this technology does mean YOU CAN ACTIVATE THE DISPENSER WITH A TV REMOTE, it’s not perfect. It discriminates against certain toys. Sometimes it clogs and I have to rub the little silicone nozzle between my fingers to clear it. Sometimes it takes a sec to suck the lube into its innards, causing me to pull back the toy just in time to see the dispenser bzzzt a puddle of lube onto my desk.

But I won’t cry over spilled lube, because this product has turned me into a lazy bastard and I wouldn’t trade it for anything. I think I reached peak white whine status the day I scoffed because the lube dispenser wasn’t responding to my toy and I had to physically pick up my back-up pump bottle to squirt lube on it. Wahhhh.

An automatic lube dispenser is not the kind of thing laypeople probably need. It’s a borderline unnecessary product, emblematic of American culture’s obsession with efficiency and desire to streamline every part of our lives, but that could be said about many things. People buy special contraptions so they don’t have to slice their own butter. Selfie sticks are not a basic human need. I guess I could sit up to drink water, but by god when given the choice not to, I take it. That’s the benefit of living in the 21st century, and I am proud to automate the transference of lube to my genitals.

Lube itself still takes the #1 spot as the most essential tool in my sexual arsenal, and “putting on the new Tegan & Sara album” is still my best (okay, only) seduction technique, but this dispenser is a definite runner-up. For intrepid sex toy users, crafty camgirls, folks who want to impress their Tinder dates with their dedication to the swift and copious distribution of lube, or anyone who wants to bring a touch of gadgetry to the bedroom — it fucking rocks.

Get the simplehuman Sensor Pump on Amazon, or try the sex-toy-specific Touch dispenser.