Review: U Touch Side 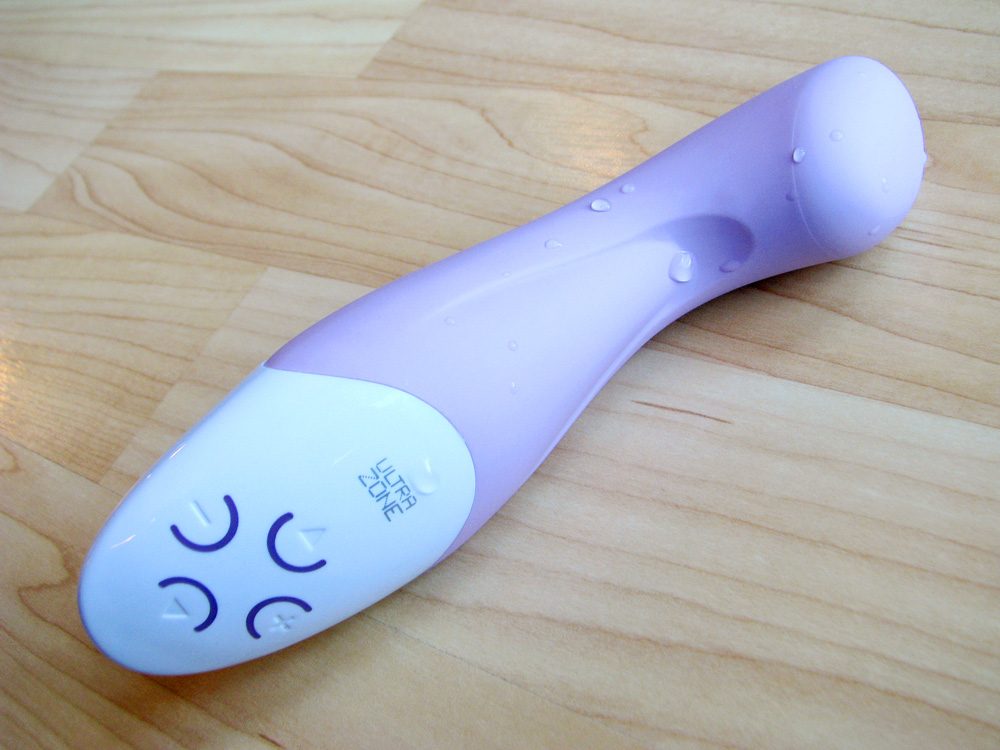 I wasn’t, at first — I was legitimately intrigued and even somewhat optimistic when I first heard about it. When a big company like Topco realizes rechargeables are the way of the future, it’s reason to be excited. But apparently not that excited.

This line offends me because it takes everything we love about rechargeables and shits on it. It steals what’s good and alters it until it’s 10x worse.

And then it asks for $85 for the thing, as though we don’t have a precedent, as though LELO and Je Joue and Jimmyjane and Fun Factory don’t exist and haven’t spent years developing this technology. At least when LELO asks $169 for a toy we can be like, “well, they’ve been making rechargeables for 10 years, and the power is pretty epic.”

The U Touch Side, which sounds like a fucking instructional dance video from 1988, is not epic. I am convinced, in fact, that it should be rebranded as Your Own Personal Hell™.

The first disconcerting omen came in the form of a little silver symbol on the box, next to which was the phrase “touch screen.” When I held the toy in my hands, I actually said out loud, “oh no. They mean that literally.”

A quick fact about buttons that give no tactile feedback: CONSUMERS DON’T LIKE THEM. This has never worked out in the past, and it’s not going to work now. You are not ~revolutionary~, Topco. You are not ~up with the times~. You’re just desperate.

The Side comes with a matchbox-sized manual that I’m guessing is the same one they throw in with their UltraZone toys, since IT BARELY PERTAINS TO THE ACTUAL U TOUCH LINE. It also echoes dumb warnings I’ve heard before, such as “apply a reasonable amount of water-based lubricant to the surface of the product,” and it warns me not to “trample” the product, so I’ll be careful not to do that with my hooves. Also, apparently I should charge the toy for 4 hours before every use if possible. You know, for “better results.”

The manual isn’t where the useful information is, anyway. Instead, check out the the tiny gray print on the box before you throw it out, since that’s the ONLY PLACE you’ll find instructions for how to turn this motherfucker on and off. Except they’re worded in such a way that you aren’t exactly sure what they mean. Hint: if reviewers have to powwow on Twitter to figure out how to turn your damn toy on… do I even have to finish this sentence?

For the record: you hold the up and down arrows for three seconds simultaneously to turn it on and off. A Topco rep explained that while this toy doesn’t technically lock for travel, having to press two buttons at once makes it “nearly impossible to turn it on without the user’s involvement.”

By this point, I could not have given one shit whether this toy felt good or not. But I endured the testing period anyway. Vibration-strength-wise, it lands between the LELO Gigi and the LELO Siri. The Jimmyjane Form 4 is much stronger, and the LELO Mona 2 is laughably stronger and rumblier.

Also, the Side starts on the highest vibration intensity. My favorite!

When I said that Topco shits on everything good about rechargeables, that was a slight exaggeration. The charging situation is actually pretty slick. It’s magnetic, but not as finicky as most magnetic chargers. The adapter lights up easily, red, and when it’s finished it turns green. This is literally the only redeeming factor I can muster.

Topco, come here, dear, and listen close. Do not jump in the rechargeable game unless you’re ready to spar with the big boys. There’s no need to unnecessarily create “innovative” features. Really. All you had to do was create something reliable, body-safe, and easy to use, with many vibration settings. But you couldn’t do even that.

It doesn’t help that you have no fucking clue how to name toys. I hate to ask what your staff’s children are called.

Want this shape but not the incorrigible anger that comes along with it?
Get the PicoBong Moka. And if you’re looking at the U Touch Up,
for the love of all that is good and holy, get the LELO Siri instead.