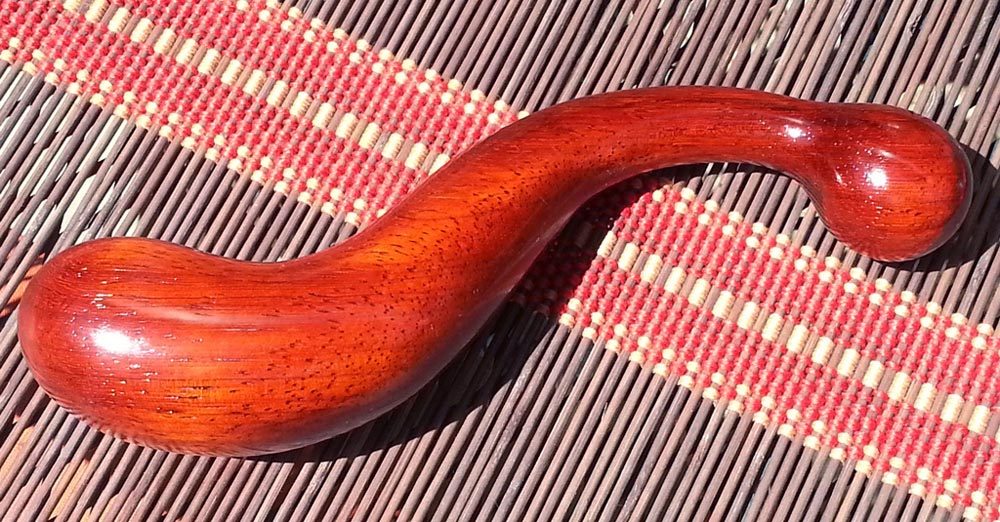 Luckily, I’ve found the perfect way to revive my love for the Seduction in Nuala MacMoragh, a reader who bought it based on my recommendation and was just as impressed. I asked her to take a photo of her Seduction, which is made of Padauk wood, and share her experience with y’all.

After a little email banter about our mutual love of the Pure Wand, Epiphora suggested that I might enjoy the NobEssence Seduction, because I wanted something thicker. About a month later, I found one for a good price.

I had only about an hour alone when my Seduction arrived, so I told myself that I would just look at it. My jaw dropped when I saw the thick end of the toy. At 1 7/8″, it made all my other toys look wimpy. I worried that I might’ve gotten an unusually large one-off, so I measured it, but it was indeed within spec. Even if I could never work up to the thick end, I rationalized the smaller end wouldn’t be ice cold at room temperature like the Pure Wand.

After cleaning it, I ran my fingers over the smooth surface. With 40 minutes to spare, I told myself that I’d just slip it down into my yoga pants “just for a minute.” Moments later, my pants were halfway down my thighs, and found myself grinding the curve of the toy against my vulva while I rocked the ball into my G-spot. It thrilled me that I could stimulate my clit and G-spot simultaneously, cupping the blunt end with my palm like a joystick.

Over the next few days, I made myself sore using it the same way. I wondered if I’d ever get the thick end in for long enough to manipulate it against my G-spot. I have since spent a lot of quality time with my Seduction. Now I am able take the blunt end completely — the fullness and hard pressure against my G-spot consistently cause satisfying, violent multiple orgasms. I’m really happy with the Seduction, and I thank Epiphora from the bottom of my you-know-where for recommending it.

Also, if there were a contest for number of toys someone has bought on my recommendation and subsequently loved, I’m pretty sure Nuala would win. Besides the Pure Wand and Seduction, she has acquired and adored the Eroscillator (and I quote: “I’ll NEVER, EVER regret the 229.95 I spent on that Eroscillator. It’s a must have.”), Crystal Twist, Maverick, Splash, Pure Plugs, Mustang, Cush O2, Echo, Star Delight, Mona 2, Alumina line, Bootie, Comet G Wand, Luna Beads, Romp… and that’s a pared-down list.

It’s possible I have dictated almost her entire toybox. Give that woman a prize.

Anyone else love the NobEssence Seduction with the heat of a thousand suns?