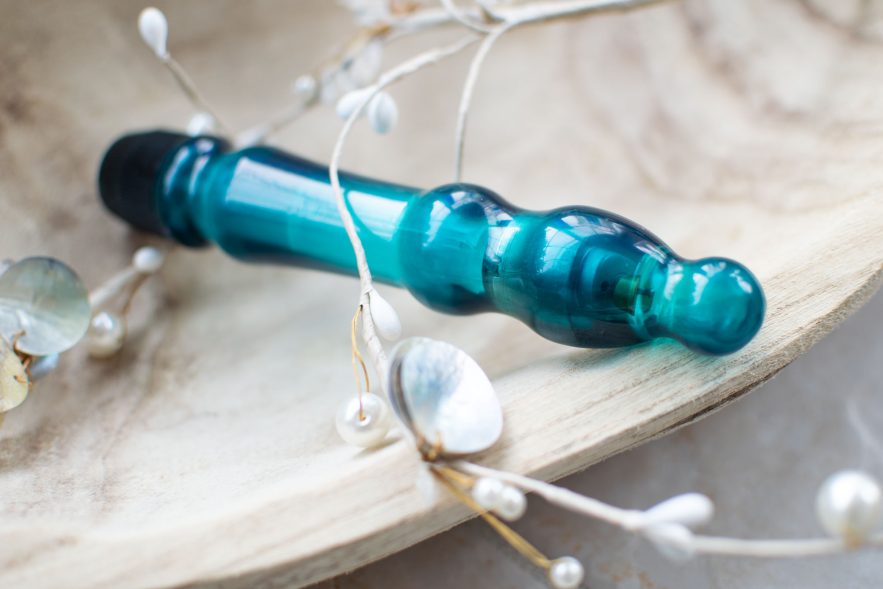 I stumbled upon the Turbo Glider whilst on the hunt for an inexpensive vibe that wouldn’t fall apart or die right away. Initially, I was drawn to it because of its interesting shape and stylish dark teal color. It was also very affordable. Because of that, I wasn’t too optimistic about its performance or longevity.

The Turbo Glider takes 2 AAs, and the batteries are also fairly simple to replace, as long as you make sure to screw the dial end all the way until it’s tight. When I first got the vibe, I was afraid it was a dud because I hadn’t tightened it completely. The batteries also don’t seem to drain very quickly.

The toy is made of a simple transparent dark blue plastic, so you can see the batteries and the motor inside. I love how nice and smooth this vibe is, and it feels very satisfying going in and out of my vagina as well as stimulating my clit. Because of the shape, positioning the head at just the right angle against my clit feels awesome.

The motor is located near the vibrator’s head, which makes the tip of the toy vibrate the most. I’ve found the lower vibration settings to be sufficient in most cases, and only turn the vibe up when I’m ready to come. Others may need the higher settings, though, which are quite high!

This vibe doesn’t offer any patterns, so the vibration is just your regular old hum. On the lower settings, it isn’t insanely loud. You probably wouldn’t be able to get away with using it in the same room as someone else without them finding you out, and the higher settings definitely have a significantly louder buzz to them, but you can’t expect much more for the price.

I’ve taken the Turbo Glider in the shower and bath with no issues. Just make sure the cap is completely tightened first. Also, because it’s made of plastic, cleaning is a breeze.

Get the Turbo Glider (under various names) at one of my fave shops: SheVibe, Early to Bed, or Come As You Are (Canada).