Shops that need support most during COVID: brick and mortars such as Early to Bed, She Bop, and Smitten Kitten! More info
Sex Toy ReviewsVibrators
September 15, 2008 1 2 min read 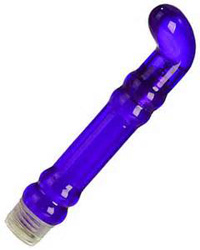 The Crystal Candy G-Licious came in a transparent plastic box that looked like it belonged in the little girls’ aisle at the store: stars all over it and a crazy font. Although I am not five years old, I much prefer this kind of design over photographs of lame heterosexual couples pretending to have moments of sexual bliss.

Performance-wise, this vibe is average. I was hoping for some mammoth-like power out of the two AAs, the way the Turbo Glider just rocks its AAs. But instead, the vibrations are only standard in intensity, and the range of vibration levels is not very extensive. Consequently, the buzz sound is neither especially quiet nor especially loud.

I should probably address my G-spot yet again. No, I still haven’t found it. And I’m not entirely sure this vibe would be able to find it for me, because the vibration just isn’t enough. I wanted to be able to say that the Crystal Candy G-Licious was a worthy G-spot relative to the Turbo Glider, but alas, it does not have the power.

However, if this vibe were to break or otherwise become useless, I bet it would make a good puppet. Just pull a sock over it, add some googly eyes, and put on a show!