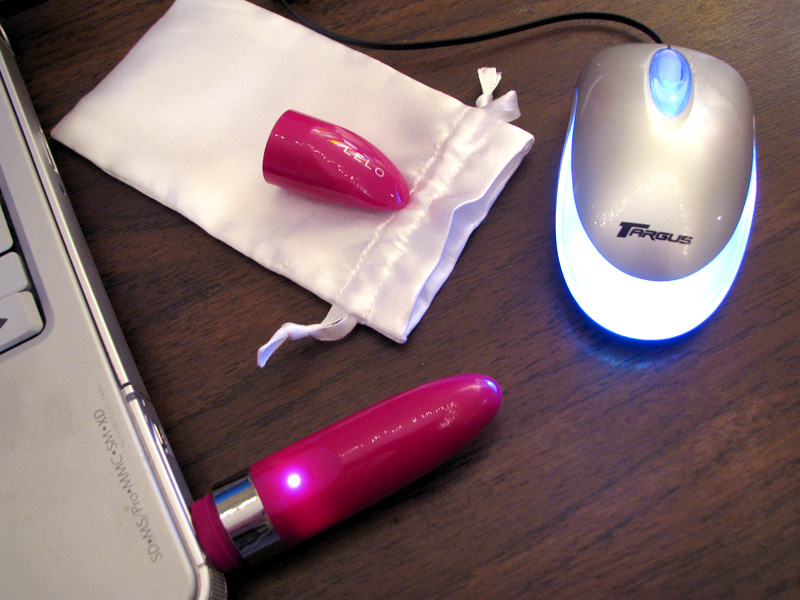 Plugged into my laptop.
Update: LELO has updated the Mia twice since this review. Read my review of the 1.5 version and the Mia 2.

Here is who I am: I got very excited when I received a 2GB jumpdrive as a gift. I anxiously await every new version of Firefox. I install a bazillion extensions and scripts to customize it. I have a dual monitor set-up. Oh, and I’m on the computer 24/7.

Mia is made of plastic, with a silver part around the middle and a cap that pops off. The plus and minus buttons, just under the silver on the rounded end, are made of silicone, so they’re soft to the touch and don’t get too slippery. I was surprised originally, because I always assumed the flat end (with “LELO” on it) was the end you were supposed to use on your clit. Nope, the rounded end is for that. The vibration travels throughout the body of the vibe, so I did try using the flat end, but it’s not as powerful.

I counted about seven levels of constant vibration. After that, you can switch into pulsation land and there are three types of pulsating vibration levels there (short interval, intermediate interval, and extended interval). Also, there aren’t breaks in the vibration — just lower levels of vibration — between the pulses. I prefer this type of pulsation over the stop-and-go of other vibes I’ve used.

Despite the wonderful options for vibration, I ultimately wanted stronger vibrations. That’s not to say that Mia is weak — definitely not. It’s just not strong enough for my lame clit, which requires quite a bit of stimulation. In terms of noise, Mia isn’t silent, and the higher vibration levels are even more not silent. It’s not loud, just not quiet enough to be used while waiting to deposit your paycheck at the bank.

Oddly, when using it, I noticed that I was swirling Mia around in a circular motion around my clit. Normally I like to just press vibes against my clit (and by “normally” I mean “all the time”). I think I reverted to this method because just pressing it against my clit wasn’t quite enough, but moving it in circles added to the sensation and felt more like a finger. It was quite nice, and I would encourage all Mia owners to try it if general pressing doesn’t suffice.

Other plus-sides to Mia: it comes with a one-year warranty; it comes with a white satin drawstring pouch; it alerts you when the charge is low. One downside: the cap doesn’t lock into place, and there isn’t an O-ring or anything inside, so I have to be extra cautious when washing it.

Even if the vibrations weren’t powerful enough for me, I’m impressed by the thought that clearly went into making this cute little gadget. I may not use Mia much in my crazily-long masturbation sessions at home, but I will definitely be throwing it in my bag when I go places. While it is possible it could raise some eyebrows because I never have any make-up, tampons, or pink items in my bag in the first place, it’s still more discreet than any other vibe I own. Plus, I don’t have to pack batteries or worry about it turning on during class or while I buy my groceries; the geniuses at LELO also made sure to protect all of us from potential embarrassment by allowing Mia to be “locked” by pressing both the plus and minus buttons at the same time. Yesss.

Get the LELO Mia at one of my fave shops:
SheVibe, LELO, Babeland, Pleasure Chest, or Lovehoney (international).